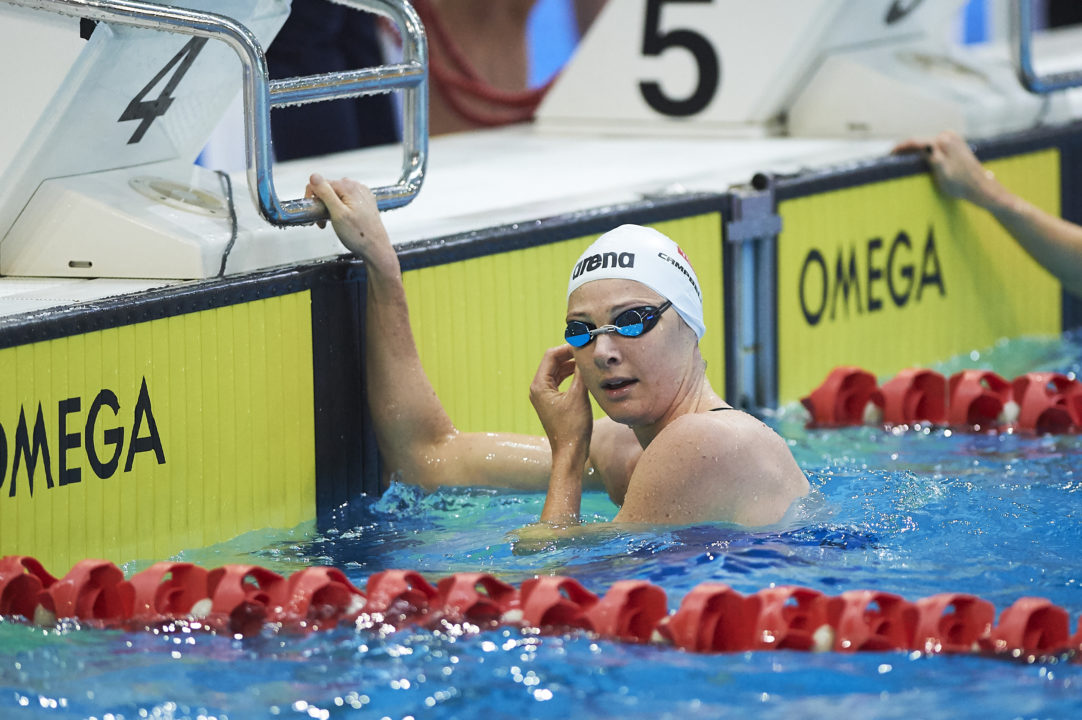 The women’s 100m free tonight simply looked like an Olympic final, hands down, with the top 3 swimmers all hitting sub-53 second markers.

Cate Campbell led the field with a menacing 52.12, laying waste to the stiff Aussie-mandated Worlds QT of 53.20 and crushing her previous season-best of 52.35 from Aussie Nationals in April.

C1’s time tonight, which was composed of splits of 25.44/26.68, represents the 6th fastest 100m freestyle performance in history. The Simon Cusack-trained star already is on the all-time performances list with her 52.03 from Pan Pacs last year and 52.06 stunner from the 2016 pre-Olympic Grand Prix.

Hitting the wall .29 later was on-fire Emma McKeon, who just produced her 2nd lifetime best of these World Trials. After already snagging the 200m free and 100m fly World Championships qualification, with a PB of 1:54.55 in the former, the Griffith University Olympic medalist cranked out a huge 52.41 in this women’s freestyle tonight to take silver.

So far this season McKeon has been as quick as 52.84, the time that gave her silver behind C1 at Aussie Nationals. That itself was just .04 off of her lifetime swiftest of 52.80 hit at the Aussie Olympic Trials in 2016, so McKeon entered new territory tonight to hack almost .4 off of that PB to take silver and put her name in the mix for an individual medal in Gwangju.

McKeon’s outing tonight is among the top 20 performances of all-time and the 25-year-old has just become the 6th fastest performer ever in the event.

Bronte Campbell may have finished 3rd and out of individual qualification in this 100m free, but her time of 52.84 is her first sub-53 second outing since last year’s Commonwealth Games.

After battling injuries and taking some time off, C2’s time here tonight is tremendous, inserting her among the top 8 performers in the world this year.

St. Peters Western star Shayna Jack also reaped her 2nd lifetime best of these Trials for 4th tonight.  This morning she threw down a solid 53.21 for the 3rd seed, only .01 off of the time she clocked at Aussie Nationals that marked a PB.

Behind the Campbell sisters and McKeon, Jack held her own, flying to the wall in 53.18 to get nearer to that 53-second barrier and add her name to the women’s 4x100m free relay.

Marion’s Madi Wilson finished 5th in 53.60, but is continuing to look dynamite her in terms of personal victories. She already logged a new PB this morning of 53.88 and the 25-year-old hacked that down to 53.60, most likely enough to get a nod on the relay as a prelims swimmer in Gwangju.

Look for a more in-depth article on this historic women’s 100m free after today’s session.

The men’s 200m back top 3 remained the same from prelims to finals, but the 2nd and 3rd place finishers swapped places. Leading the pack as expected was Mitch Larkin, the newly-minted sub-1:56 200m IM Aussie National Record holder who already snagged World Championships qualification in that event, as well as via his 52.38 stunner in the 1back.

Behind Bradley Woodward, who touched in 1:57.66 and Jordan Merilees, who hit 1:58.11 for bronze, 16-year-old All Saints age group standout Thomas Hauck got under 2:00 for the first time in his young career. The teen touched in 1:59.30 for 4th in this big boy final tonight.

Going back to Larkin, the Dean Boxall-trained athlete now sits as the 2nd fastest swimmer in the world this season.

The women’s 200m breast couldn’t continue the World Championships qualifying momentum, as winner Taylor McKeown‘s gold medal-slaying mark of 2:24.95 was far from the 2:23.81 QT. She laid waste to her previous season-best of 2:27.65 from the Sydney Open last month, while she also now checks in among the top 25 performers in the world this season.

Tessa Wallace put up a time that falls in her own top 10 performances ever, with 25-year-old Pelican Waters swimmer nailing silver in 2:25.15, while Jenna Strauch hit the wall in 2:26.34 to round out the top 3.

22-year-old Strauch of Bond produced a new lifetime best in this event en route to winning her first senior national title in a time of 2:24.88, a time just over a second from the 2:23.74 QT. She couldn’t replicate that kind of time tonight, however.

2:07.16 is the monster effort Wilson put up in April at Aussie Nationals for a new Australian and Commonwealth Record. That time took over the previous Aussie standard held by Christian Sprenger from 2009 and checked Wilson in as the 4th fastest performer ever across the world in this 200m breast event.

He’s obviously gunning to improve that time and will get the opportunity to do so in Gwangju.

Also getting a shot to race in Gwangju is runner-up Zac Stubblety-Cook of WBAC. The 20-year-old snagged silver tonight in 2:08.54, enough to slide under the 2:08.80 Aussie-mandated QT for Worlds and put his name in the hat of possible minor medal contenders.

Stubblety-Cook owns a personal best time of 2:07.89 that he earned last year in Tokyo at the Pan Pacific Championships. That time gave the WBAC swimmer the silver ahead of Wilson in Tokyo.

24-year-old Chandler star Jack McLoughlin just wrangled up his 3rd individual event qualification time for next month’s World Championships. After hitting the 400m and 800m freestyle markers, the Olympian busted out a 14:52.83 in this 1500m free tonight to clear the 14:59.32 QT set by Swimming Australia.

McLoughlin represented the only swimmer of tonight’s field to delve under 15:00 territory, with Australian Open Water National Champion Nick Sloman finishing in 15:11.12 and Ben Roberts behind him in 15:22.72.

McLoughlin now ranks 6th in the world this season, with tonight’s performance ranking as the 3rd fastest of his career. His performance tonight was quicker than the 14:55.92 he produced in Tokyo for Pan Pacs bronze and within striking distance of his PB of 14:47.09 he threw down on the Gold Coast for the 2018 Commonwealth Games title.

If they can put it together for the relay, no one’s getting close.

McKeon and C2 are good under pressure anyway, if they and Jack can hand C1 a big lead hopefully she’ll be able to relax a bit and just put the hammer down (which seems to be when she swims best).

Did you see C1s splits on the relays of the Pan Pacs layt year, and even the Olympics…relays are not a problem.

She split a 51.9 recently in the Fina Champs series.

Please don’t compare supersuit times to textile times. Oranges and apples … with all due respect to Britta Steffen, she is out of place up there. At least, have a separate textile ranking. Same goes with the male counterparts: Cielo’s 46.91 in my mind does not compare to Mc Evoy’s 47.04 or Mag’s 47.10.

Steffans times can be disregarded now that they’ve been usurped, but Cielos still stand as the world standard, unfortunately they must still be mentioned…

The way Dressel and Chalmers look though, maybe not much longer…

Would you be saying the same thing if your best times were the super suited ones? Would you have been up in arms about peoples times before goggles and after swimmers started wearing goggles?

It is nice to see how fast these people are compared to the records of the past.

Of course they wouldn’t because they’d be biased. Of course not because goggles aren’t banned. The sooner these records are erased from the books the better.

Fastest on paper by some way with a team of swimmers who’ve been there, done it and are pretty reliable when it counts. No relays are ever safe, but this one looks the safest bet of the week for me. Aussie female sprinters have it in their hands; Shouldnt be beaten by anyone other than themselves.

Depth wins women’s relays- that’s why the US and AUS always seem to rise to the top. Only weakness of either team is Australia’s breaststroke, otherwise they are both as solid as ever.

Unlike the men, the women’s relay have never choked! Olympic gold 2012, 2016, multiple WRs and barring major injuries are prohibitive favourites for 2020

My thinking too, the Australian ladies always show up in the 4x100fr. Even if three of them didnt, the way Cate anchors relays they’d probably still win ha.

Agreed. Even at the last 2 Olympics where the Aussies didn’t do that well they still won this relay early on…this is their baby

McKeon’s time (52.41) is impressive, but what’s more impressive is that she has room for improvement with a better distribution: 25.09-27.32 is too overbalanced toward the first 50 for a swimmer capable of 1.54.5 in the 200 free. Anyway, McKeon’s freestyle on an upper level in these trials.
Very promising win in the B-final for 15 year-old Molly o’Callaghan (55.27).

The 50fr tomorrow night promises to be even more competitive. Granted C1 is a clear favourite for one but with C2 being less than 100% fit, the 2nd qualifier is now wide open. Whilst C2 can by no means be counted out, both McKeon and Jack have PBs in 24.3s and are both on top form.

That’s bloody impressive for St Peters; Both would make world finals easily. Reminds me of Bath in the UK on the mens 4×2 – Four with PBs under 1.48.

27.32 sec is statistically a very respectful time for the second half of 100 race for 52 sec range swimmers. A few only go under 27sec.

Not related to the article, but does anyone think Ledecky will ever lose the 800 at a major competition again? Or will she just kind of retire at some point on top?

If she goes 8:11 at worlds again this year I could see a situation where Wang beats her.

McKeon is a gamer and has proven to be extremely dependable when the stakes are highest. The fact that she’s popping PBs right now should put even Cate on notice, and if everyone else holds up their end, it’s going to take an otherworldly performance to take down the Aussies in the 400 FR.