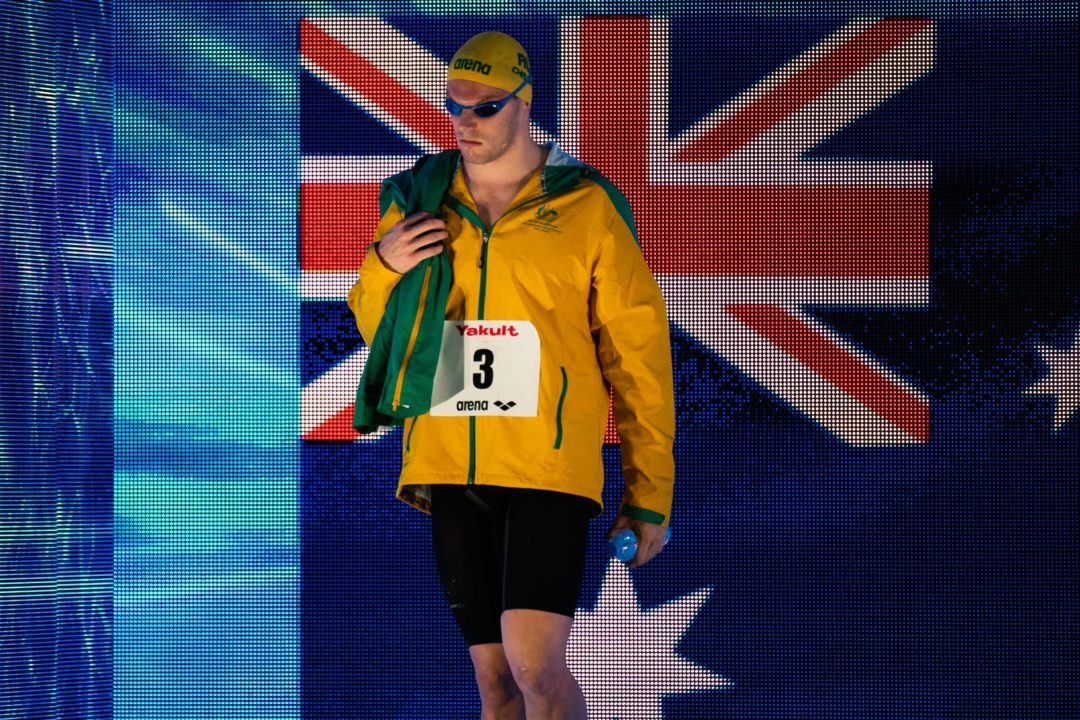 King Kyle Chalmers blasted the fastest 100m freestyle time of his career tonight, a monster 47.35 to take gold in a World Championships-qualifying outing. That takes over his previous PB of 47.48 from Aussie Nationals in April and also moves the 20-year-old Marion swimmer back on top of the world rankings throne for this season.

You can read about Chalmers’ statement-making performance in the separate post here.

Behind Chalmers tonight was 21-year-old St. Peters Western standout Clyde Lewis, the swimmer who already nailed World Championships qualification in the 200m free behind Chalmers in a new personal best of 1:45.88.

Lewis took gold in the men’s 400m IM on the Gold Coast at the 2018 Commonwealth Games, as well as bronze in the 200m IM, but he opted to focus on freestyle this meet and it paid off. Although his new lifetime best of 48.46 falls short of individual qualification on paper, the fact he’s already qualified in the 200m free may make Swimming Australia give Lewis the nod in this event as well.

At minimum, he’s made it onto the men’s 4x200m free relay, along with bronze medalist here Cameron McEvoy and 4th place finisher Alex Graham.

McEvoy touched in 48.66, his fastest since the 48.44 from last year’s Commonwealth Games.

Throssell had already nailed relay qualification with her 4th place finish in the women’s 200m free and silver in the 100m fly. Tonight she sealed the deal in a 2nd individual event with this solid 200m fly win.

Her time tonight positions her just inside the top 10 performers in the world this season.

As for Commonwealth Games silver medalist Laura Taylor, the 19-year-old TSS Aquatics standout missed out in this event, finishing in 2:08.42 for silver when a minimum of 2:07.82 was needed for Worlds. Taylor holds a PB of 2:06.80 from February of last year, a mark which made her the 8th fastest Aussie ever, but the magic just didn’t happen for her tonight.

Just one man qualified for the World Championships in this 200m IM event, but he did it in a world-shaking way. 25-year-old St. Peters Western star Mitch Larkin followed up his massive 52.38 100m back gold medal-winning performance here with a ground-shaking 200m IM effort of 1:55.72 for his 2nd win.

As for the rest of the pack tonight, the men came up short, with runner-up Thomas Fraser-Holmes hitting 1:58.76, a very respectable time for the 27-year-old, but outside the 1:57.81 QT.

Western Australia’s Blair Evans got the job done in terms of winning gold in this women’s 400m IM, but the veteran fell short of the Worlds QT tonight.

Behind her was Ohio State’s Meg Bailey who registered 4:41.61 for silver, while 15-year-old Jenn Forrester produced the fastest swim of her young career in 4:44.39 for bronze.

The 18-year-old holds the Aussie National Record in this event with the 8:17.07 she nailed at Pan Pacs to finish with the silver behind American legend Katie Ledecky. She was already 8:18.61 this year en route to taking the Aussie National title back in April and was on course with that performance here, nailing 8:18.23 for gold.

Titmus has already qualified for the 400m free in a new Aussie Record, as well as the 200m free, so this teen is well on her way to a packed schedule for GWangju when the 4x200m free relay is added in as well.

Behind Titmus tonight was TSS Aquatics swimmer Kiah Melverton, the 22-year-old who already punched her ticket to Gwangju behind Titmus in the 400m free as well. Tonight Melverton crossed the finish line in 8:22.83, a new personal best by just under 3 seconds. In fact, Melverton’s outing tonight enters her onto the all-time Aussie list in slot #4.

Rounding out the top 3 was 17-year-old Lani Pallister, the 3-time Junior Pan Pacs champion who laid waste to the Aussie Age Group medal board earlier this year at Age Championships. Pallister has a bright future ahead of her with her 8:25.66 bronze medal finish tonight, a time that would have qualified her for Worlds had she finished top 2.

I think they will take Townsend to the worlds. Chalmers, Lewis and Graham are locks for the worlds already. Add Cam to the list and they still get one spot open. You got mixed relays and everything. So extra swimmer wont be a much cost.

The Aussie men showing some life with these lights out performances.

Throssell also has an individual swim in the 100 Fly

I’d say larkin’s swim was better because we had more of an idea of what chalmers was capable of going into this meet. Chalmers was excellent but I didn’t expect to ever see 2015 larkin again.