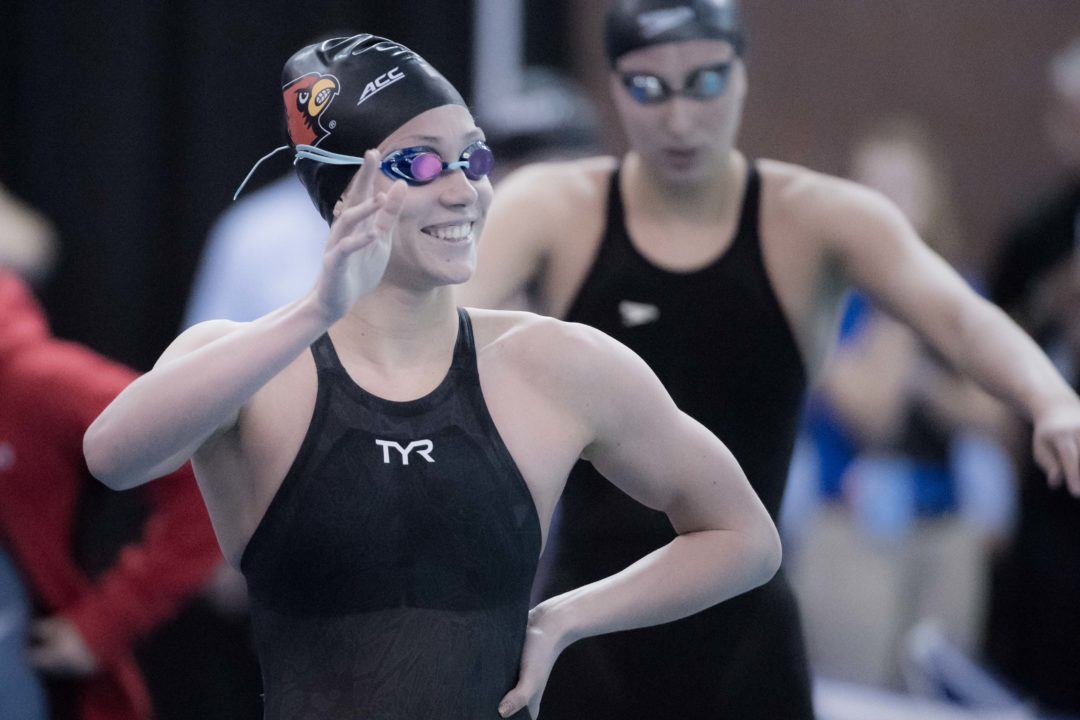 Defending champion Mallory Comerford of Louisville could become the second woman to ever break 1:40. Though Ledecky will be absent this time around, fellow Stanford swimmer Simone Manuel will look to give Comerford a run for her money. We may see another tight battle given that their best times are only a hundredth apart. Archive photo via Mike Lewis/Ola Vista Photography

Last season, Louisville’s Mallory Comerford brought the thunder in the 200 free. Comerford turned heads in the swimming world as she ran down Olympic champion Katie Ledecky to tie for the NCAA title. We won’t get to see a rematch between them this season, as Ledecky has opted for the 400 IM instead, but Comerford will be back. She’s been putting up fast times since the beginning of the season, and could become the second woman to ever break 1:40. Though Ledecky will be absent this time around, fellow Stanford swimmer Simone Manuel will look to give Comerford a run for her money. Manuel has been battling injury all season long, but that didn’t seem to impact her times at Pac-12s one bit – enough so that she enters as the top seed. Manuel has a reputation as a racer, doing what she needs to do, in the 100 free – but in this 200 last year, she was just 3rd.

The whole dynamic of this race changes, though, without Ledecky lurking. While it’s not actually what happened last year, the expectation is that Ledecky will always close on her competitors in the 200 free – though last year, Comferford actually chased her down on the back-half of the race. If this takes the pressure off to dig hard on the first 50 (where Manuel last year was half-a-second clear), that works to Manuel’s advantage.

Aside from Comerford and Manuel, Michigan’s Siobhan Haughey is the only swimmer in this field to have broken 1:42. Haughey has already been within tenths of her best time this season, and returns after placing 4th in 2017. Last season, she made a big drop from Big Tens to NCAAs, swimming over a second faster in March. She’ll be dangerous if she can make the same drop this time around.

Michigan should be in for a big points haul here if their swimmers can replicate their Big Ten performances. They have Haughey, last season’s 6th place finisher Gabby Deloof, and sister Caitie Deloof all seeded in the top 8. Cal and Stanford each have a strong shot at getting 2 in the final. Manuel and Katie Drabot (who was 14th last season) will be racing for the Cardinal, while the Bears have Katie McLaughlin and standout freshman Robin Neumann. Though this is only her first season in yards, Neumann is a top-8 seed. McLaughlin, who won the B final last season, is seeded #22 coming into the meet, but it’s worth noting she didn’t swim this event at Pac-12s.

Texas A&M’s Claire Rasmus, who won the SEC title in this race, returns after placing 8th last season and should challenge for another finals spot. She’s one of a few swimmers bunched into the 1:43-mid to 1:43-high range this season. Virginia has 2 women looking to crack the top 8 with Megan Moroney (1:43.60) and Jenn Marrkand (1:43.85). Georgia’s Meaghan Raab (1:43.85), who placed 11th last season, is also in the running.

Don’t count Simone out that quickly. In fact, I don’t think there’s anything between them in this race.

Simone actually would be my pick if it wasn’t for her injury this year. While she is obviously still in very good form, I just see that 1:40.7 as about her best this year. While that’s still a lock for second, I doubt it’s enough to beat comerford. I’d love to be surprised though, should be a great race.

I wouldn’t be so sure it’s a lock; I don’t follow yards closely enough to know her form, but in the LC pool Haughey is the fastest of the three over 200.

I’d say that’s mostly due to Manuel never really doing 200m at Worlds/Olympics than anything else, and due to Comerford breaking out just last year.

I wouldn’t sell Haughey short. She has a 1:55 and both Comerford and Manuel are around 1:56 high/1:57 low. I don’t think that Manuel and Comerford being able 1:55s is at all a foregone conclusion (although I would agree Comerford has one in her). I personally think Haughey will produce something spectacular at NCAAs. Whether that will be enough to beat either Manuel or Comerford remains to be seen.

Too bad they aren’t swimming SCY or Haughey would be the favorite.

Some of you guys are acting like Simone had a broken foot and was in a cast for months. Lol. She had a hip injury and was on restricted training. Pulls only. I don’t think she was ever out of the water. And she still has the fastest in season times in all three of her events. In my opinion she’s the favorite in the 50 100 and 200 free. She always finds a way.

She didn’t find a way last year when she didn’t have an injury and got 3rd in the 200 Free. Regradless, it should be a great race.