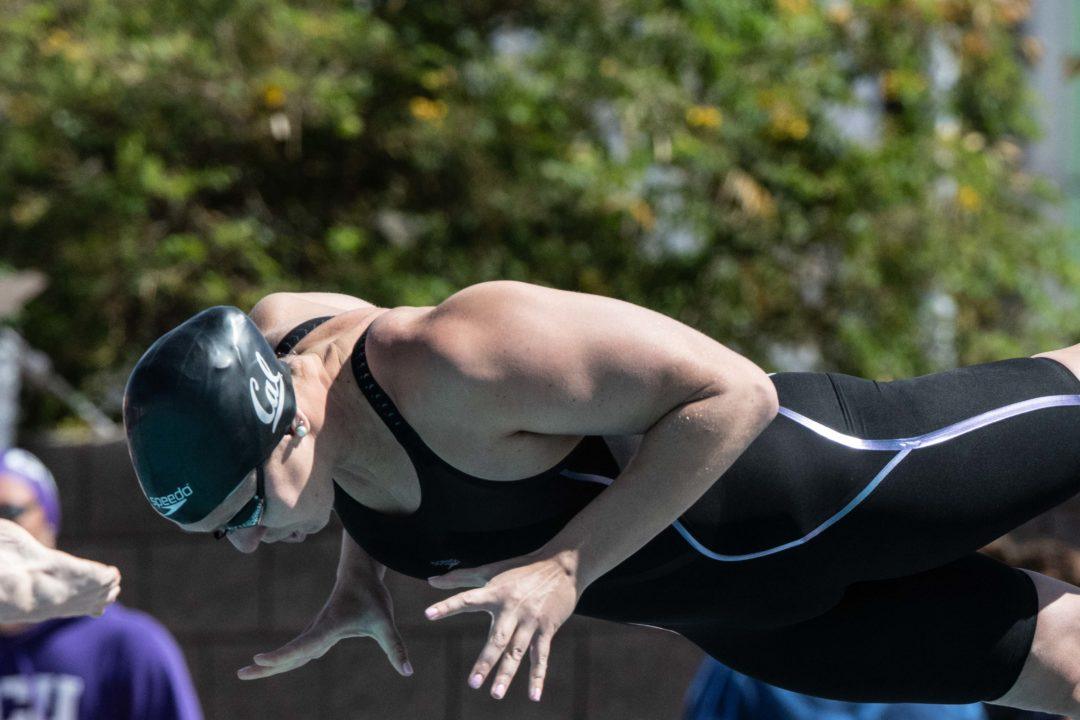 Cal was within .07 of winning this relay last year and returns all four legs, including two potential 20-point splits. Archive photo via Mike Lewis/Ola Vista Photography

Stanford won the event and set basically every record possible last year, but things look significantly different in 2019 with three of those four legs graduated. It’s Pac-12 rivals Cal who look like the team to beat, with the top incoming time and two of the top six 50 freestylers in the national ranks this year.

Cal has American record-holder Abbey Weitzeil, who blasted a 21.16 at Pac-12s. (Weitzeil holds the American record at 21.12 from her pre-college years). They also have Amy Bilquist, who sits #6 on the current 50 free psych sheets at 21.64 and who split 21.0 at NCAAs last year. That’s not a bad way to build a relay: with two swimmers who could put up 20-point swims, one of them perhaps on a leadoff leg.

Cal returns all four legs from last year’s runner-up relay that was .07 seconds behind Stanford. Katie McLaughlin was 21.4 last year and only seems to be improving her sprinting over her college career. Maddie Murphy was 21.9 leading off last year, but relay split 21.6 at Pac-12s this year.

Perhaps the top threats? NC State and Tennessee, each of whom have big-time sprint talents to power their relay teams.

Tennessee has Erika Brown, the chief threat to Weitzeil for 50 free supremacy. Brown broke the NCAA record in the 50 free at SECs, going 21.15 – a hundredth faster than Weitzeil at Pac-12s. Tennessee doesn’t quite have the sprint depth that Cal does. They had a 21.7 and two 21.8s on their relay last year, but all four legs return and have already gone faster this year (1:26.51) than last year (1:26.85). They’ll need Maddy Banic, Stanzi Moseley and Bailey Grinter to get closer to 21.5 if they want to challenge Cal, with perhaps one of them going 21-low to keep pace with Bilquist.

NC State is a little deeper without a single swimmer of Brown’s or Weitzeil’s caliber. Ky-Lee Perry has had a resurgent junior season after struggling with injuries last year. She’s been 21.5 individually this year and can probably lead off in 21-low if she’s at her best. Freshman Kylee Alons was the ACC star of this relay, blasting a 21.1 split, though that was with a very risky relay exchange of .03. Marshall transfer Sirena Rowe was 21.4 at ACCs, and breaststroker Sophie Hansson chipped in a 21.9. Without a 20-point type swimmer, NC State needs all four to be at their best to contend for the title, but it’s not entirely out of reach.

Meanwhile Stanford has reloaded as well as can be expected. Freshman Taylor Ruck split 21.4 and 21.5 at Pac-12s and is a solid leg of this relay. Lauren Pitzer returns after splitting 21.6 last year. Meanwhile two more NCAA rookies jumped on this relay at Pac-12s: Amalie Fackenthal (22.1 leadoff) and Anya Goeders (21.7). Stanford has the depth to finish high, but they’ll have to figure out their leadoff leg – going 22-anything to open will leave them swimming through a pool of waves the rest of the relay and doesn’t bode well for their chances.

Texas and Michigan return out of the A final last year and are buoyed by huge freshman additions. 6th-place Michigan adds 21.6 sprinter Maggie MacNeil, who will add this to her butterfly and backstroke entries in Austin. Siobhan Haughey has already been 21.3 this year and the other two should be at least 21-high. Texas, 8th last year, used freshmen Grace Ariola (21.7 leadoff) and Julia Cook (21.8) on the first two legs at mid-season, and had four legs at least 21.7 or better. Much like NC State, they may not have a 21-low in the mix, but do have four solid legs with no major weak spots.

Louisville is the direct opposite of the freshman-boosted teams. They return all four legs from the 5th-place relay last year. Mallory Comerford split a crazy 21.0 last year (though that was a quick exchange of .07) and has the ability to swim with the best sprinters in the field. Casey Fanz was 21.7 at ACCs, not far off her 21.6 from last NCAAs. The trick will be getting a leadoff under 22 and keeping all legs in the 21s. The Cardinals had two 22-second legs last year, which is becoming a big disadvantage as nationwide sprint talent and depth continue to rise.

UNC is an odd case. They only went 1:29.0 at ACCs, but cut all the way to a 1:27.36 at their last chance meet a week later, with all four legs going significantly faster, including Brooke Bauer dropping from 22.1 to 21.5. The question is whether they can repeat that performance when it’s not a clear pool with no chop – their back three legs went 21.5/21.8/21.6 in that last chance swim, but a 22.3 leadoff is going to put them behind the eight-ball and in some seriously choppy water in an NCAA heat.

Virginia beat them soundly at ACCs in a head-to-head swim, and weren’t even at their best. Morgan Hill led that relay off in 22.0; she went 21.6 individually. But the Cavs will have to be on to make the top 8 – they had no sub-22 splits at ACCs in this relay, and graduated their only 21-second splits from last year’s 4th-place relay.

Others to watch for: Auburn had a breakout SEC meet under their new coaching staff. It remains to be seen if they can replicate it at NCAAs, but they had Claire Fisch go 21.1 and could go from no 21-second legs last year at NCAAs to all four breaking 22 this year. They rank 6th nationally right now. Another program with a new coach, Missouri went 1:28.0 at SECs behind a 21.7 split from Sarah Thompson and a 22.0 leadoff out of Ann Ochitwa.

Great synopsis and I think spot on in the order of finish..if you picked 1-8 correctly, I will buy you a MacBook Pro! (A DQ and no MacBook Pro even if you go 1-8!)

Mark my words– those CAL ladies remember that .07 touch-out from NC’s. Seems like one of those losses that sets a fire in a swimmer. They are hungry for the win and the record.