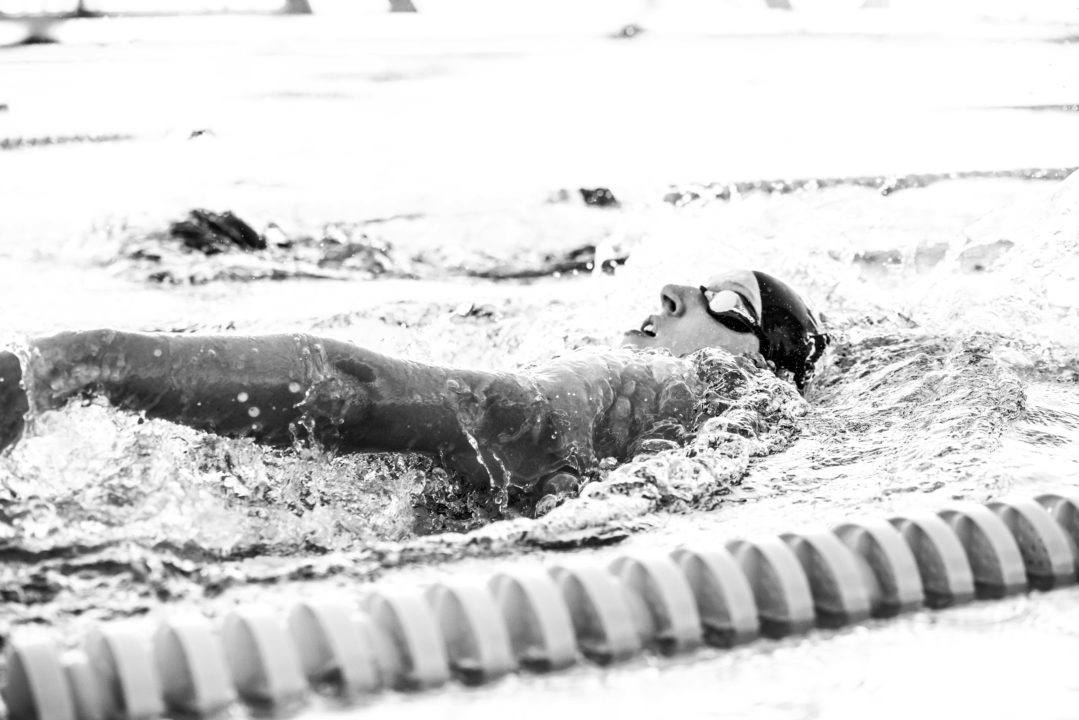 The 400 IM American Record changed hands last season between Stanford teammates Katie Ledecky and Ella Eastin. Now that Ledecky has dropped the 200 free for the 400 IM at NCAAs, who will capture the title (and possibly the American Record) at the big showdown? Archive photo via Mike Lewis/Ola Vista Photography

The 400 IM American Record changed hands last season between Stanford teammates Katie Ledecky and Ella Eastin. Now that Ledecky has dropped the 200 free for the 400 IM at NCAAs, who will capture the title (and possibly the American Record) at the big showdown? At the 2018 Pac-12 Championships, Ledecky smashed the American Record and clipped Katinka Hosszu’s former NCAA Record. Interestingly, Ledecky’s freestyle split was slower this time around than her previous American Record swim, while she improved significantly on the front half. We could see something in the 3:55-range if she’s able to get her free split back to a sub-53.

We can’t count out Eastin, though, as she’s the defending NCAA champion and was also under the former American Record at Pac-12s. Though Ledecky had the faster opening split at Pac-12s, it wouldn’t be surprising to see Eastin taking the early lead at NCAAs. She impressed with a 200 fly American Record at Pac-12s. She’s also got the edge on breaststroke. If anyone were to challenge those two for one of the top 2 spots, it would most likely be Texas A&M’s Sydney Pickrem. At SECs, she clipped her lifetime best for the title, making her the only woman aside from Ledecky and Eastin to break 4:00 this year.

Stanford could be getting a huge points haul here between Ledecky, Eastin, Brooke Forde, and Allie Szekely. That gives them the potential to make up half of the championship final if they all swim up to their best times. Freshman Forde is having a great debut NCAA season, having dropped a second and a half from her lifetime best already. Szekely has a lower seed, as she was a few seconds shy of her best at Pac-12s, but her lifetime best 4:02.34 from last season would make her a safe bet for the A final.

We have a handful of returning finalists this season aside from Eastin: Texas A&M’s Bethany Galat, Denver’s Bailey Andison, Virginia Tech’s Reka Gyorgy, and Missouri’s Sharli Brady. Of the returners, Galat has the fastest best time with a 4:01.06 from last season’s NCAAs. That would most likely nab a spot in the top 5. Andison may be one of the most dangerous considering the big drops she typically makes from conference to NCAAs. Heading into the meet, she’s over a second faster at this point than she was heading into last season’s meet. Gyorgy (4:04.42) won ACCs in a lifetime best this season, while Brady (4:04.37) swam to a lifetime best at midseason.

One of the potential new faces in the A final is Cal freshman Sarah Darcel. In her first yards season ever, Darcel is already fast enough to have placed 5th last year. The top 8 cutoff may end up being a lot faster this year. It took a 4:06.00 to make the final last year, and the 8th seed for the meet is 4:04-low. Still, Darcel should make the cut if she swims like she did at Pac-12s.

There are a few women seeded outside the top 8 who could battle for one of the finals spots. Tennessee’s Meghan Small enters with a 4:06.91, but has been as fast as 4:03.95 before. Small was the B final winner last season. Her teammate, Tess Cieplucha, put up a lifetime best 4:05.43 at midseason. Ohio State’s Meg Bailey (4:04.85) has already dipped under 4:05 with a lifetime best at Big Tens and will have the home pool advantage. South Carolina’s Emma Barksdale was a B finalist last season and enters the meet with a best time of 4:05.43 from SECs.

Katie likes to swim from the front. It suits her aggressive style of swimming.

At the Pac-12s, KL got a lead on Ella on the fly and back. I think Ella will press the pace this time and try to stay with her.

Sydney Pickrem is also a contender. She will be right there going into the free as well.

This is a stacked 400 IM field this year.

Don’t care who wins, I love both girls. How about 2 American women beating Hosszu?