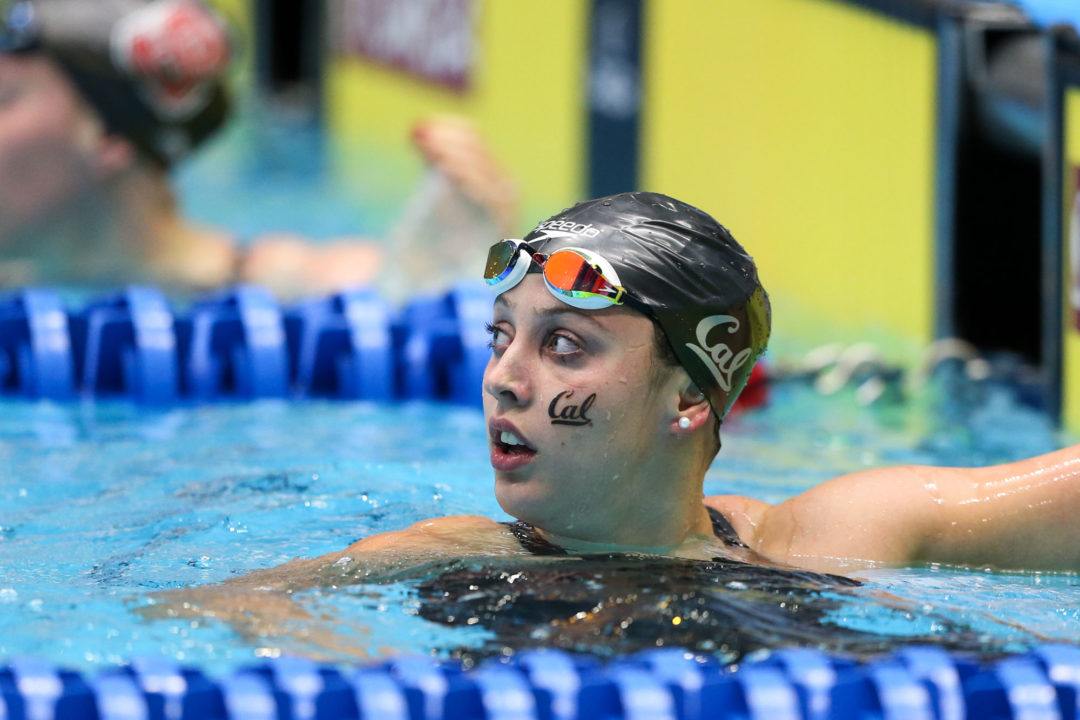 Kathleen Baker will be looking to repeat in the 100 backstroke at the NCAA Championships. Archive photo via Tim Binning/TheSwimPictures.com

For fifteen years Natalie Coughlin, one of the most decorated Olympic athletes in history, was the only woman who had gone sub-50 seconds in the 100 back. Her clocking of 49.97 in 2002 stood at the top all the way until February of 2017, when Stanford’s Ally Howe dropped a 49.69 at the Pac-12 Championships. It’s been just over a year since Howe joined Coughlin under the barrier, and in that time three more women have joined the elusive club, setting up an epic battle at the 2018 NCAA Championships.

Kathleen Baker did it twice at the 2017 NCAAs, ultimately winning the title in 49.84 (she led off the medley relay in 49.80). Cardinal senior Janet Hu, a two-time NCAA A-finalist in the event, defeated Baker to win the 2018 Pac-12 title in 49.93. With Baker being the 100 back Olympic silver medalist and Hu an established top tier swimmer in the NCAA, neither of those two going sub-50 was a big surprise, but the other woman who did it certainly was.

Wisconsin sophomore Beata Nelson, who was 27th at the NCAA Championships in her freshman year, dropped over a second during the Invite season to go 50.78, and then dropped another full second at Big Ten’s for a 49.78. That makes four women, the four fastest in history, all within a quarter of a second of each other, set to go to war in this 100 back.

Baker, the only one of the bunch to go sub-50 twice, was slightly faster at Pac-12s this year than last, indicating she’s on track to go below 49.8. Howe wasn’t able to match her record swim at NCAAs last season, placing 4th in 50.58. She led off the medley relay at Pac-12s in 50.21 (opting out of the individual event), and if the speculation of Stanford resting less than usual for Pac-12s is true, then she’s in line to crack 50 once again as well. However, the consistency and clutchness of Baker tips the scales in her favor.

Throughout her career Hu has never really dropped much time from conference to NCs, either staying relatively the same or adding a bit. With that being said she has a ton of experience on her side, and simply matching her Pac-12 time could be enough to snag the win. Nelson also added in all three of her events from Big Ten’s to NCAAs last year, but it was only her freshman year and she’s on a completely different level now. She’s essentially an unknown to these established veterans, and could definitely pull off an upset win. It is worth noting that after leading off Wisconsin’s relay in 49.7, she was 50.5 in the 100 back prelims and 51.0 in the final at Big Ten’s. She’ll need to prove herself on the biggest stage.

Behind those four, three of the next four seeds come from the SEC. Seniors Hannah Stevens (Missouri) and Lisa Bratton (Texas A&M), along with Kentucky sophomore Asia Seidt, had an exciting race at the conference championships. Stevens, a member of the 2017 U.S. National Champion in the 50 back, used her speed to get out to the early lead, but Seidt managed to make up six tenths on the final 25 to steal the title in 50.86. Stevens came in at 50.91, and Bratton was right there in 51.10 as they hold seeds 6, 7 and 8. Stevens was 3rd last year, while Seidt is one the rise and Bratton is swimming the fastest she ever has. It could very well take sub-51 to make the A-final, something Stevens and Seidt have done and Bratton is on the cusp of.

Along with Baker, Howe, Hu and Stevens, Texas’ Claire Adams swam in the championship final last season, finishing 6th in 50.95. Faster both at the Texas Invite and Big 12s relative to last season, she is in position to improve last year’s finish.

NC State’s Elise Haan unleashed a PB of 50.75 to win ACCs, putting her in the mix for her first individual A-final berth. Last season she was in the consols (13th), along with Seidt (12th) and Cal’s Amy Bilquist (9th). Bilquist has been sub-51 on four separate occasions and was solid at Pac-12s (51.28). The battle for a spot in the top-8 is going to be tight, but with Bilquist consistently under 51 throughout her career she’s in a good spot to jump up from her 11th seed.

Others knocking on the door to sneak in the A-final in this event include Indiana’s Ali Rockett, Georgia’s Kylie Stewart, Missouri’s Haley Hynes and North Carolina’s Caroline Baldwin. Rockett, Stewart and Hynes all registered best times at their respective conference meets in times ranging from 51.2 to 51.5, while Baldwin was within two tenths of her 51.38 best at ACCs in 51.58.

This final will be so close to get into. Prelims will be very fast!!

I’m sure Baker will take this one, but I’d love to see Ally Howe win an individual title her senior year

I’m not sure why, but I have a feeling Hu will beat Howe

Underwaters is why, Hu is a beast at them!! Hope she wins something this time!

I’d imagine they train for those, but still, both are very leg heavy swims. Hopefully doesn’t hinder her performance in either