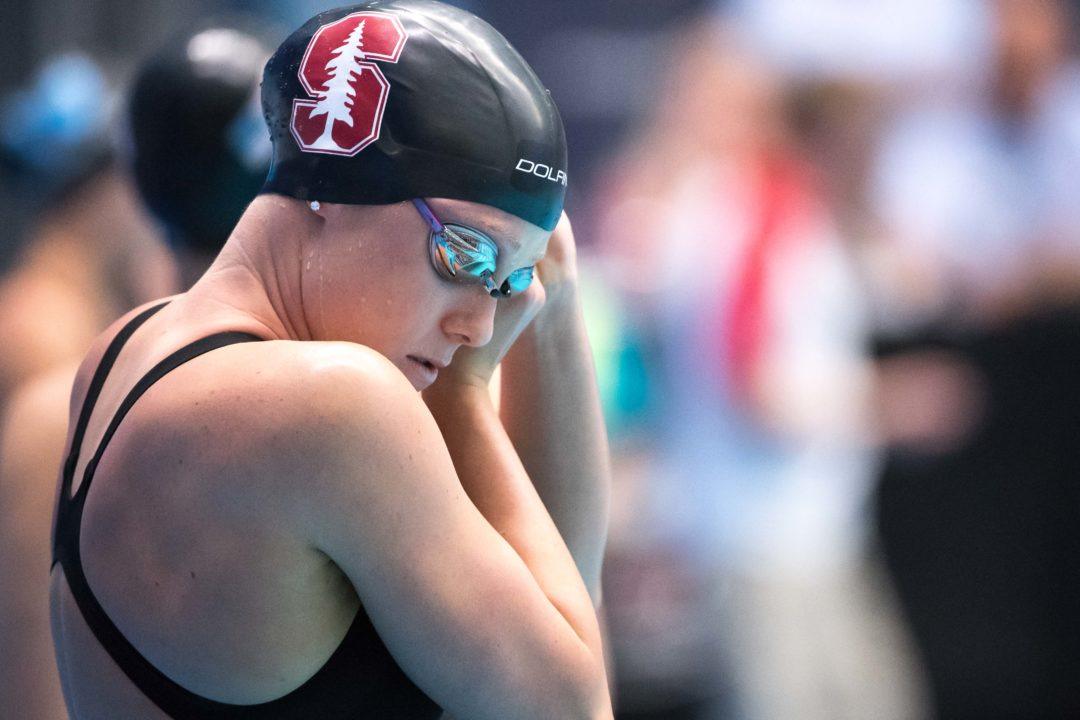 For Eastin, the conqueror of all four strokes, it may be the 200 butterfly where she'll have the fewest obstacles on her path to an NCAA title. Archive photo via Mike Lewis/Ola Vista Photography

Stanford’s Ella Eastin has been very good at the 200 fly for a few years now. While her ventures in IM, which have extended to international successes that reach past the NCAA season (silvers in both IM races at the 2016 SC World Championships), have been the cornerstone moments in her career, her 200 fly has reached new levels this season.

Now, Eastin is a clear favorite for the 200 fly crown later this month. The same can’t be said for the IM specialist’s two other events– the 200 and 400 IM. Funnily enough, the events she’s known for are going to be her toughest to win; in the 200 IM, she’s up against defending NCAA champion and Bay Area rival Kathleen Baker as well as international IM competitor Sydney Pickrem. In the 400 IM, she must face Katie Ledecky, of all people. So, for Eastin, the conqueror of all four strokes, it may be the 200 butterfly where she’ll have the fewest obstacles on her path to an NCAA title.

Only two other women, USC’s Louise Hansson and Stanford’s Katie Drabot, have been faster than 1:52 this season. Hansson, who took out her race against Eastin at Pac-12s with a blazing 51.81 and somehow held on after that, has been 1:51.13, while Drabot’s been 1:51.74. Whereas Eastin has found a new resurgence in this event, it’s a newer race for Hansson and Drabot. Both are sophomores, and neither swam it at NCAAs last year. Both women are insanely versatile, though, so it’s no surprise that they’re at the top of the national rankings this year in this event.

Past those three, only one other swimmer has even broken 1:53 this season– UGA senior Megan Kingsley. A more seasoned veteran in this event, Kingsley has battled back against injury (including two knee surgeries in 2017), and her 1:52.62 from SECs, a PR, ranks her fourth in the nation this season.

USC junior Maddie Wright (1:53.38), Texas sophomore Lauren Case (1:55.18) and junior Remedy Rule (1:55.25), Cal junior Katie McLaughlin (1:54.97), and UVA senior Jen Marrkand (1:53.55) return from last year’s A final. Case and Rule made the final last year for the Longhorns, only to have Rule disqualified in the final for allegedly going too far underwater off of the start. That DQ caused controversy at the conclusion of the meet, as UGA finished 4th in the team standings ahead of Texas by just a half point.

Cal’s McLaughlin is still looking to throw down the big times that her 2:06 LCM swim from 2015 suggest she’s capable of.  She’ll push for an A-Final along with teammate Noemie Thomas. Meanwhile, Virginia’s Marrkand could come forward with some intriguing time drops under the new direction of head coach Todd DeSorbo in her final NCAA Championships.

Texas A&M freshman Jing Quah (1:53.05), Michigan sophomore and Big Ten champion Vanessa Krause (1:53.44), Louisville sophomore Grace Oglesby (1:53.87), and Tennessee sophomore Meghan Small (1:53.97) are the remaining swimmers to have broken 1:54 this season. Quah, from Singapore, is a wild card as a freshman in her first season in yards, while the sophomores are a bit more experienced having grown up in the United States and having raced at NCAAs last year.

Dark horse: UGA’s Chelsie Britt. The senior was 1:54.44 to take 9th in prelims last year, three hundredths off of qualifying for the A final. This year, she’s seeded 14th in the nation with a 1:54.34.

I hope I am speaking for those of us who were watching live when Ella broke the AR. Correct me if this is wrong, but all eyes – & until the last length – all attention were on Louise Hansson, who had taken it out so fast. Louise was not passed by Eastin till her full length underwater off last turn, but in the excitement of the moment, it wasn’t until the race was over that anyone realized the record had been broken.

She has three individual tough races, so she’ll just try to take them one at a time.

If she won 2 out 3, that would be a great meet. The 400 IM might be the toughest of all, having to battle Ledecky and Pickrem.

“…with the Katie Ledecky’s, Simone Manuel’s, and Lilly King’s of the world…”

Apostrophes don’t make something plural, they make it possessive.

And I can’t wait to see what Eastin can do in this event, she is amazing.

Not only Ella, we want to see what they ALL can do, yeah? 🙂 It ought to be amazing.

What will be interesting is that other than Eastin’s outright fave status, high placement in this event will depend on energy management and meet endurance. 200 fly is already gruelling but on the last day of NC’s? Some of the faves may falter for this reason. Last day fatigue— it happens.

Swim Swam team, please try to get a hold on these mobile malware ads that are ruining the mobile user’s experience. It took me 5 attempts just to make this comment from my phone, while having it scream “CONGRATULATIONS YOU’VE WON” with other around. It’s a major nuisance

Use chrome app instead of safari

Still happens to me with Chrome

I don’t have these. Maybe it’s an issue with your server?

It is a known issue, we’ve been working on it with the company that serves 3rd-party ads for a few weeks. They believe they’ve put in a fix, but feel free to email us if you guys continue to see them after today.

Eastin is a heavy favorite but I think Hansson has a shot. She dropped time at NCs last year, and if she can improve on that 51.8 / 59.3 race plan, she could push the 1:50 barrier.

Agreed, I’m looking forward to see if Hansson is able to make the pacing adjustments.

Hope so – the “piano” alternative (a scenario so many of us have either witnessed or experienced – I am in the latter group) is so painful.

noemie thomas hasn’t been 2:06 LC. I think there’s confusion of her vs. Katie McLaughlin

zswam – I can see where that sentence is confusing – but as written it actually reads that it is talking about McLaughlin. The bit about Thomas is an appositive. I’ll rewrite so that’s more clear.

I think I’d pick Krause to be in that A-final, personally. She went a speedy 1:53 at B1Gs, and I think she has some room for improvement.

I’m really hoping McLaughlin does well. After Worlds 2015, I was convinced she would be the next star for the U.S., but then it seems she struggled a little bit as she started at Cal and had some injuries and such. I was heartbroken when she didn’t make the Olympic Team. She’s slowly rising back up again, and while she’s definitely a much better swimmer in the big pool, I hope she can at least break 1:52 this year.

Eastin is certainly untouchable though. Her underwaters are crazy. Her last underwater is… Read more »