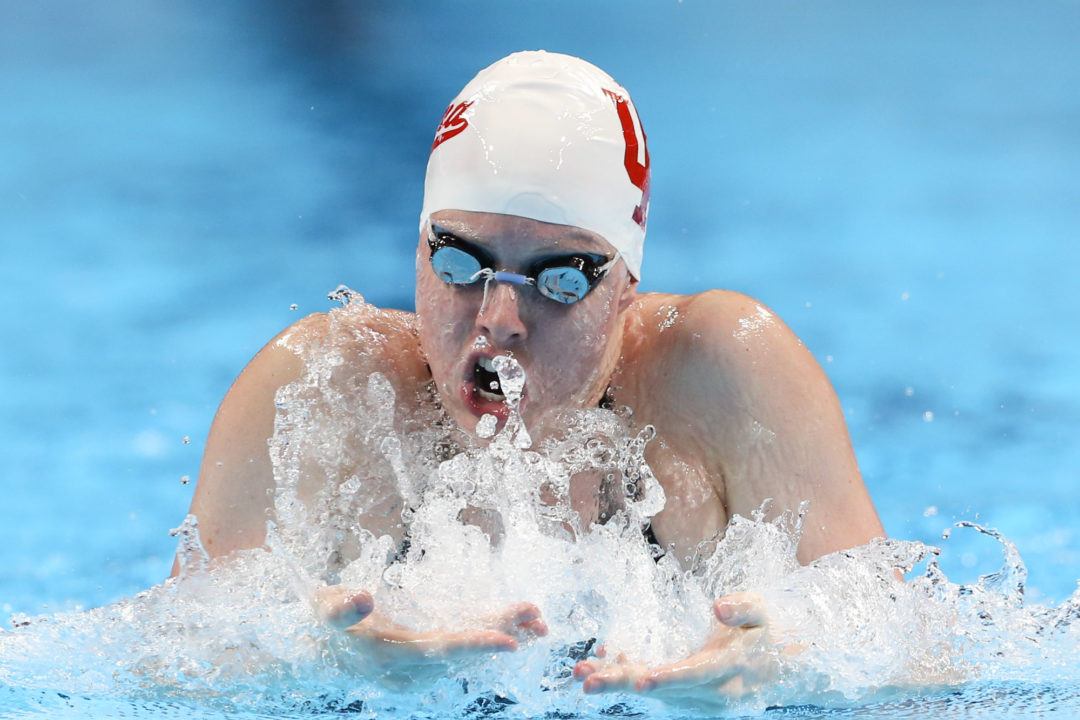 The 100 breaststroke belongs to the Big Ten this year, with the top three seeds belonging to schools from the power midwest conference. Archive photo via Tim Binning/TheSwimPictures.com

The 100 breast LCM world record holder, Lilly King, probably won’t have much competition. Like Ledecky, it’s a race against the clock, and the IU junior has been 56.46 this season already, just .16 off of her NCAA, American, and U.S. Open records. Could a 55 be in the cards?

The 100 breaststroke belongs to the Big Ten this year, with the top three seeds belonging to schools from the power midwest conference. 2nd seed Lindsey Kozelsky and 3rd seed Miranda Tucker represent Minnesota and Michigan, respectively, while Tucker is a transfer from IU (making her twice as Big Ten, right?). Kozelsky and Tucker are the only other swimmers to have broken 58 seconds this season besides King, with Kozelsky having been 57.91 and Tucker 57.93. They’re neck and neck, and little, if anything, separates them. Well, two hundredths separate them, technically. Let’s just say it’ll be close.

The fourth seed might be a name you’ve never seen before. Coming in with a 58.37 is Eastern Michigan junior Delaney Duncan, and it’s about time we pay her some attention. The Illinois native headed to Eastern Michigan with a high school best of 1:04, then transformed into a NCAA qualifier with a vastly-improved 59.46 at the 2016 MAC Championships. Duncan went on to place 14th at NCAAs as a freshman from a mid-major program, an impressive feat. She regressed a bit as a sophomore, posting a 59.89 at MACs in 2017 and then missing scoring at NCAAs with a 1:00.58 to tie for 29th. This year, though, she has found yet another gear, and her 58.37 ranks her 23rd all-time in this event.

Kansakoski entered last season’s NCAA Championship meet, as a freshman, with a top-4 seed. In her freshman meet, she had a little trouble with her prelims swim, and while she was better in the evening, she couldn’t match her season best. She’s about half-a-second slower in-season this year than last, so an optimist’s view is that she’s got more left for NCAAs – if she can ‘get up’ for her morning swim.

Stanford’s Kim Williams sits 9th (59.07), just ahead of Texas’s Kennedy Lohman (59.25). Lohman transferred from Arizona, and is Texas’s highest qualifier in this event. Kentucky has two well-ranked swimmers in this event, with sophomore Madison Winstead at 13th (59.38) and freshman Bailey Bonnett at 16th (59.48).

Dark horse: Pitt’s Lina Rathsack. The German native and Pitt senior Rathsack was 13th last year with a 59.00– it’ll probably take a 58 to make the A final this year, so a big swim from her could secure a top 8 spot.

I’m pretty sure Rachel Bootsma won NCAAs one year in the 100 Back, then consoled in it the very next year. Clark Smith won NCAAs in the 500 his sophomore year, then failed to make it back the next year. I’m sure there are other crazy examples like these two. It’s rare but it does happen.

Pierce has been 59.3 this year which is a great time, but a second off her best time. I guess we will see how rested she was when she went 59.3.

Yes, and in Boostmas case she bounced back and ended up winning the 100 back 3 out of her 4 years

That’s true. My point was that weird things have happened with NCAA finalists before. I remember being very surprised Bootsma was 50 point her sophomore year to win it, 52 her junior year, then wins again her senior year by going 50 point low.

Or, not tapering for conference. She’ll be in the final this week.

Watch for Maggie Aroesty — This girl became the youngest swimmer ever to break the 59 second barrier, at just 16 years of age. She thrives under pressure. She should be in the A Final, and if she here she will easily be in the 200 A Final, she is a better 200 swimmer. She has a fantastic back half, she just needs to get out fast and hold on. Would love to see her and Scott in the final!! GO USC!!!! GO MAGS!!!!!!!!!!!!!!

I think the Florida sun has gotten to you.