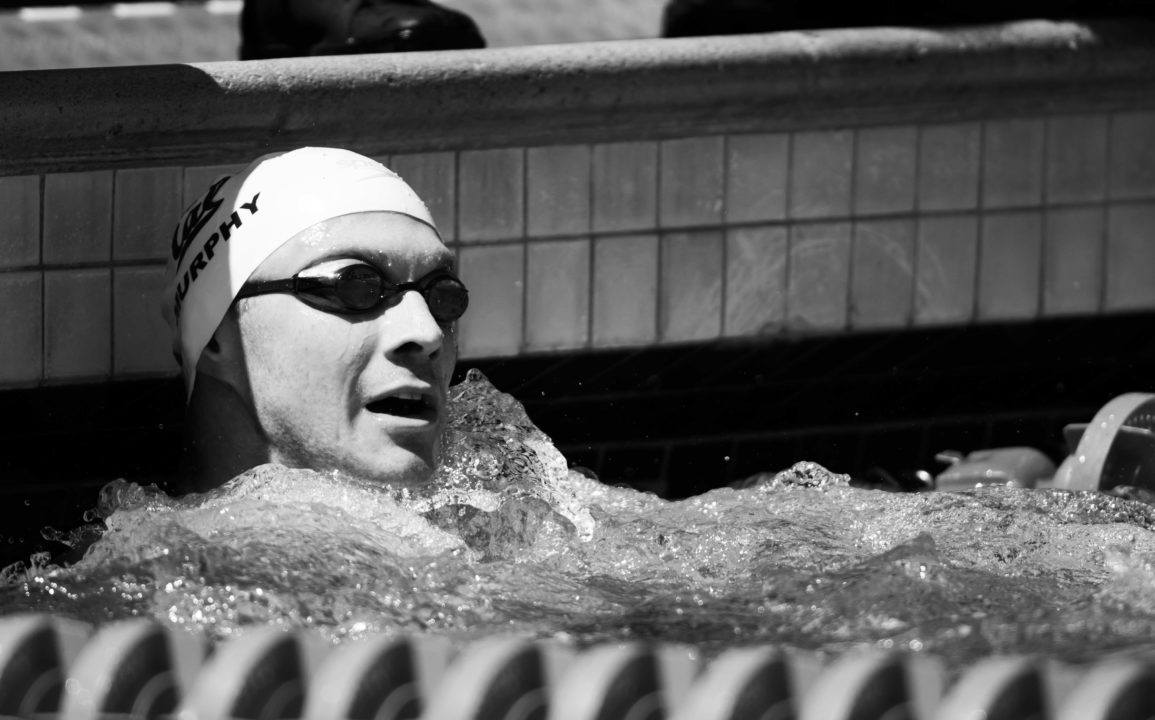 Ryan Murphy and Jacob Pebley are virtual locks for the top two spots in the men's 200 back at the upcoming U.S. National Championships in Irvine. Archive photo via Mike Lewis/Ola Vista Photography

For many years Aaron Peirsol and Ryan Lochte reigned atop the U.S. and the entire world in the men’s 200 back. Peirsol won Olympic gold in ’04, Lochte won in ’08, and after Peirsol retired, Tyler Clary joined Lochte in representing the U.S. internationally, winning an Olympic gold himself in 2012.

Lochte began to stray away from the event in 2014, and Ryan Murphy took over as the second U.S. entrant at the 2015 World Championships alongside Clary. But Murphy’s training partner from Cal, Jacob Pebley, was chomping at the bit to join his fellow Golden Bear atop the country’s rankings heading into the Olympic year.

After winning the 2015 National title in San Antonio, Pebley noted that Clary had gone a few one-hundredths faster (1:56.26) at the World Championships than he had gone earlier in the summer at the World University Games (1:56.29), and that being faster than Clary was his goal. “I didn’t quite get that, so I guess it’s just back to work”.

Fast forward to the Olympic Trials in Omaha 11 months later, and Murphy and Pebley completed the Cal takeover in the event, finishing 1-2 and qualifying for the Games as Murphy cracked 1:54 and Pebley 1:55 for the first time.

Murphy would win the 2016 Olympic title a month later in Rio, and Pebley joined him on the podium last summer as they won silver and bronze at the World Championships.

The two of them are virtual locks to make the Pan Pac and Worlds teams in this event. However, the men behind them do have a lot to race for, with the top-3 and potentially 4 swimmers qualifying for Pan Pacs in Olympic events.

With Clary retired and Lochte not seriously pursuing this event for years, that #3 spot has been wide open since 2016. Last year Robert Owen and Sean Lehane were 3rd and 4th at World Trials, but both appear to be done swimming. But the man who did emerge as the 3rd fastest American of 2017 was Austin Katz, who was 5th at the Olympic Trials, 5th at World Trials, and then had a breakout of sorts in winning silver at the World University Games last August.

He pushed his best time down to 1:56.70 there, and followed up with a huge freshman campaign with Texas, winning the NCAA 200 back title (the only freshman, men or women, to win an individual title in 2018).

He’s been 1:59.40 so far this long course season – his first time ever sub-2:00 at a non-championship meet – and has to be considered the front-runner for 3rd behind Murphy and Pebley.

Besides Murphy, Pebley and Katz, only one other swimmer who’s active this year was under 1:58 in 2017: Carson Foster.

Twelve months ago, at the age of 15, Foster walked into the U.S. World Championship Trials with a best time of 2:04.43. He earned a second swim by taking off four seconds and going 2:00.33, then won the U.S. junior title at the beginning of August with a pair of 1:59s, and then at the end of the month dropped all the way down to 1:57.87 to win silver at the World Juniors.

He was 1:59.05 last weekend in Columbus, his 2nd fastest swim ever, and looks to be in position to challenge Katz for the 3rd spot. Still only 16, the sky is the limit for him.

Sitting 3rd, 4th and 5th among Americans this year are Clark Beach, Joey Reilman and Nick Alexander, all of whom have gone lifetime bests in-season in the 1:58-mid to high range.

Reilman, a rising senior at Tennessee, is the only one of the three who was an A-finalist last summer at Nationals. After going 1:59.9 in 2015, he’s consistently chipped away at his best time every summer, and based on his in-season swims in previous years, his 1:58.8 in early July signals a big drop could be coming later in the month.

The 8th swimmer who has been under 2:00 this season is Bryce Mefford, who is coming off an impressive freshman year at Cal.

Mefford got a best time in the event for the first time in two years last summer at World Trials, winning the B-final in 1:58.63, and followed that with a pair of A-final appearances at his first NCAAs. He’s now been 1:59.18 in-season, his second fastest swim ever, and is on the rise big time.

There’s also medley specialist Abrahm DeVine, who dropped three seconds last summer to take 6th at World Trials. His primary focus in Irvine will be the 200 and 400 IM, but with the pressure off here, could easily find himself in the A-final again.

Other names who will be in the mix for a spot in the championship final include Peter Larson, a 17-year-old who has put up the four fastest swims of his life in 2018 (getting down to 2:00.24), along with Zachary Poti and Ian Grum, both of whom swam lifetime bests this past weekend in 2:00.68 and 2:00.74 respectively.

As for Lochte, though he swam a very solid 2:00.34 in Santa Clara, chances are he’ll race the 200 free instead of the 200 back on day 2, with Murphy and Pebley having a stranglehold on the top-2 spots and the potential relay implications of the 200 free.

He seemed to decline @florida so we’ll see what happens

[Joyfully singing “Sons of California,” with particular emphasis on how they/we “march on to vic-tor-y.”]

Hurrah for California, and for the Blue and Gold!

You neglected to mention Jacob Steele of Indiana who swam a 2:00.33 in Columbus with 2 personal bests.

What about John Shebat?

2
-2
Reply
JP input is too short
Reply to  Wethorn

Think he’s more of a sprinter in long course.

He looked really strong and good in the 200 at NCs, just not sure he had his conditioning given the injury the prior month.

Yeah, I agree with Shebat being more of a sprinter, although, he has stepped up before like he did at 2017 NCs and really surprised himself and everyone so you never know.

It’s fun to watch Carson Foster walk out for the finals to compete with all these older swimmers. He’s coming on strong this year.

It will be a fight for the third spot. Just like every other event, it will be exciting to see who really wants that spot the most!

I think Ian Grum will find his way into the championship final. He swam his 2:00.7 without shaving/significant rest last week, indicating he may have a 1:58 or so in the tank.