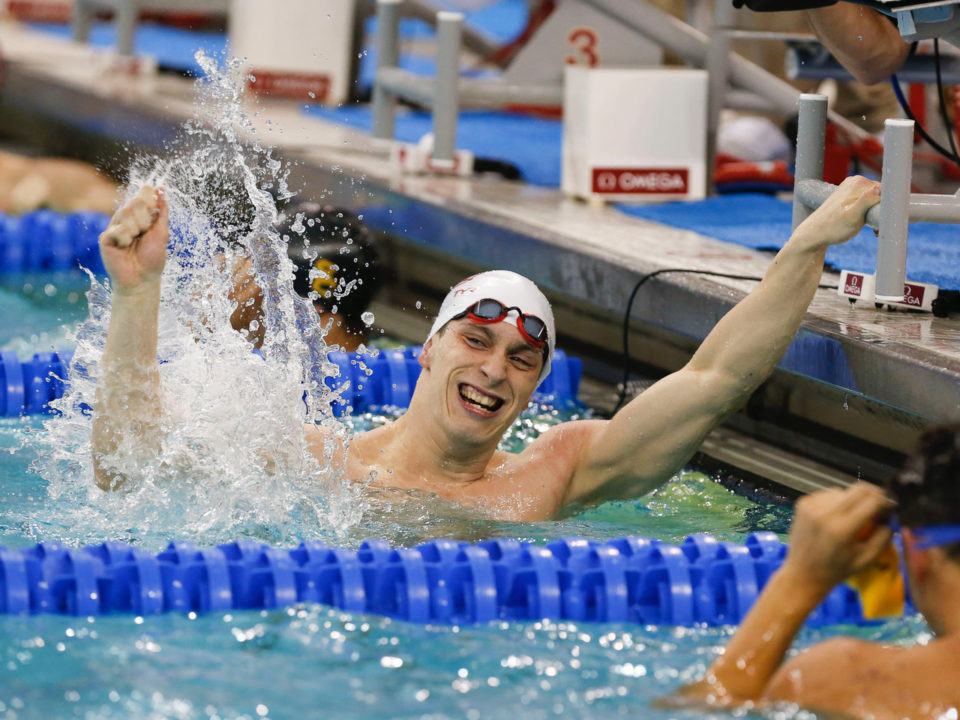 Indiana leads a brutally-close team battle, and also has several event title contenders tonight: among them Ian Finnerty (pictured) in the 100 breast and Blake Pieroni in the 200 free. Current photo via Tim Binning/TheSwimPictures.com

The plot thickens in the unprecedented five-way battle for the NCAA team crown tonight – the top five teams are separated by just 16.5 points heading into tonight’s finals. Here’s a quick rundown of the current standings and each team’s scoring opportunities tonight:

We’ve got the busiest session of the meet tonight, with 7 event finals. Things will start with the 400 IM, where top qualifier Andrew Seliskar looks to hold onto #1 after falling from 1st to 5th in the 200 last night. Jonathan Roberts of Texas is the top challenger, but anyone in the A final could theoretically have a shot.

In the 100 fly, Caeleb Dressel looks to make history again, challenging his own American record and looking for yet another event title. He’ll face Indiana’s Vini Lanza and two-time NCAA champ in this event Joseph Schooling of Texas.

The 200 free is a showdown between two-time defending champ Townley Haas of Texas and American record-holder Blake Pieroni of Indiana.

Indiana’s Ian Finnerty was the class of the field this morning in the 100 breast, but could push further into the all-time top 10 after moving up to 3rd all-time this morning.

The 100 back, then, is the definition of wide-open, with .22 separating 1st from 8th this morning. NC State’s Coleman Stewart has been the fastest in the nation this year, but Texas’s John Shebat is the top returner from last year and USC’s Robert Glinta is the top prelims qualifiers.

Then there’s the 200 medley relay, where USC leads, but has a mob of Cal, Florida, Indiana, Texas, Tennessee, NC State and Louisville breathing down their necks. Just .59 separate spots 2 through 8, with most of those teams able to make lineup adjustments before tonight.

The 400 IM A final was a very tactical race – the top two seeds in the middle of the pool went out hard, but perhaps a little bit too hard. Stanford’s Abrahm Devine made his move at the right moment, blasting to the front of the pack during the breaststroke leg and surging home with a killer instinct on free. His 3:35.29 ultimately obliterated the field by three seconds.

Arizona’s Nick Thorne roared in for second at 3:38.56, cutting almost a second from this morning. Andrew Seliskar was the top seed. He went out very aggressive and seemed to be making a move on breaststroke, but ran out of gas badly on free and faded to just 3:38.73, eight tenths off his morning swim. Same goes for Texas’s Jonathan Roberts, who was leading the way early but faded all the way to 7th by the end in 3:40.30.

South Carolina’s monster Brazilian import Brandonn Almeida came through late, surging to fourth. Behind him was Georgia’s Jay Litherland, who moved from 7th to 5th over the course of his legendary crushing free leg. His teammate Gunnar Bentz was 8th, with Michigan’s Charlie Swanson in between them.

Cal’s Mike Thomas came out with a gutsy swim in the B final, leading through fly and back before yielding the lead to Florida’s Mark Szaranek in the breaststroke. Szaranek ultimately won in 3:37.64, but Thomas moved up to 3:37.75 – both guys moved up by big margins to help their teams in the points battle. NC State’s Anton Ipsen was third in that heat as the title-contending teams really showed up to swim in the night’s opening event.

In a crazy-fast event, the 10th and 11th place finishers in the B final went faster than any swimmer in either final did in prelims, and would have been second and third in the A final.

There was no question about this race from 15 meters onward. Caeleb Dressel has the best burst in swimming, and he showed it, going out in 19.99 and finishing in 42.80 to become the first man ever under 43. That’s the second major barrier he’s broken this week, and he gets a chance at #3 tomorrow in the 100 free.

It was a massive event for Florida, with Jan Switkowski taking 2nd overall in a Gator-chomped 1-2. Indiana’s Vini Lanza was third in 44.50, and two-time event champ and Olympic champ Joseph Schooling was relegated to just 4th in a field where an astounding six men broke 45.

NC State’s Ryan Held finished 5th in 44.88, and Cal’s stellar freshman Ryan Hoffer came through in sixth, going 44.93 from an outside lane. His teammates Justin Lynch and Matthew Josa rounded out the A heat.

Texas’s Townley Haas wanted that American record back, apparently. The junior flew through the individual 200 free, going out in a blistering 43.12 to break Pieroni’s two-day-old American record with a 1:29.50.

Blake Pieroni looked like he was closing for a brief moment, but ultimately had to settle for second place in 1:30.23 – still the third-fastest swim of all-time and Pieroni’s 9th swim of the meet so far.

Auburn’s Zach Apple was third in 1:31.18 as his range continues to expand drastically. Indiana put two into the top four, with Mohamed Samy moving up to 4th in 1:31.73.

Florida’s Khader Baqlah was also under 1:32 in a blindingly fast field. Dean Farris took sixth for Harvard with USC’s Dylan Carter and Cal’s Bryce Mefford rounding out the field.

Back-to-back heat wins wasn’t enough to put Texas into the lead, but it was enough to cut Cal’s lead to 7.5 points. Indiana is 10.5 back and Florida 13.5. NC State is really feeling the loss of Justin Ress, who would have scored double-digit points if not for a back injury, and is now 33.5 points out of first place with no breaststroking scorer and no divers.

Indiana’s Ian Finnerty might have the best second-25 in swimming. He powered away from the field over that lap and carried his speed through to the first sub-50 in breaststroking history at 49.69.

Hometown favorite Conner McHugh was 51.48, followed by Louisville’s Evgenii Somov and A&M’s Mauro Castillo. All 8 of the finalists went faster than prelims in a spirited championship final battle.

Peter Stevens went out like a rocket in the B final and barely held on for the win in 52.11. Cal’s Carson Sand closed hard and nearly stole the win, but ended up moving up from 16th to 10th in 52.32. That’s a +6 in points for Cal, which really needs to build a point lead before the backstroke and diving.

Cal currently leads by just half a point over Indiana in what has been the tightest team battle we can ever remember at the NCAA Championships. Texas has fallen to 31 back, but should make up at least that much on Cal in the diving final tonight. Indiana has diver of its own and might be looking like the title favorites after a great first three days.

In what was easily the closest race of these championships so far, NC State’s Coleman Stewart had the outside smoke, coming from lane 1 to win the event in 44.58. That required a comeback on Texas’s John Shebat, who was 44.59 after going out with reckless abandon in the front half.

NC State went 1-3, and they really needed those points after not having a scorer in the 200 free or 100 breast. Andreas Vazaios was 44.81 for third.

Texas, meanwhile, went 2-4 with Austin Katz fourth (44.99). That’s a big run for the Longhorns, who will probably be battling with Indiana for the team lead tonight.

USC’s duo of Robert Glinta and Ralf Tribuntsov took 5th and 8th, with Louisville’s Nicolas Albiero and Denver’s Anton Loncar in between.

Purdue’s Steele Johnson came through with a massive final dive, nailing it to pass up Colin Zeng and defend his 2017 NCAA title on 3-meter. To make things more dramatic, Johnson actually changed his final dive from the board to grab a higher degree of difficulty to overcome what was a solid lead from Zeng.

That’ll yield Texas 26 points and Indiana 40 as they’ll overtake Cal for the points lead with only the double-point 200 medley relay remaining tonight.

In a blistering battle for the win, USC outlasted Cal despite a monster 18.2 anchor leg from freshman Ryan Hoffer, who might be the exciting young sprint story of the meet if Dressel weren’t so… Dressel. USC went 1:21.82, getting the fastest breaststroke split in recorded history from Carsten Vissering at 22.56.

Cal was 1:21.88 and broke the American record, which USC was ineligible for. Cal got the field’s best back split from freshman Daniel Carr, who had himself a great night. He was 20.85, Connor Hoppe was 23.01, Justin Lynch second-best among flyers at 19.77 and Hoffer second-best among freestylers at 18.25.

Florida got a 21.0 from Michael Taylor on back and 23.83 from Chandler Bray on breast. They elected not to use Switkowski on fly, opting instead for Mark Szaranek, who split 20.10. That means Switkowski can swim the 400 free relay tomorrow.

But Florida really surged on free, as proven meta-human Caeleb Dressel went 17.37 to roar back into third place.

Indiana was fourth in 1:22.87. Ian Finnerty was the third-best breaststroker at 22.97. Behind them, Texas got an 18.43 anchor from Brett Ringgold along with a 20.98 from backstroker John Shebat.

Tennessee’s Peter Stevens had the second-best breast split at 22.96 and Kyle Decoursey was 18.58 on free. Meanwhile Louisville was 7th with an 18.76 from Andrej Barna on free and NC State finished 8th, swimming without the injured Justin Ress and switching up their order to minimal success.

Jacob Molacek moved interestingly to fly, as the Wolfpack apparently rested Coleman Stewart after a 100 fly/100 back double. Molacek was 20.69, with Andreas Vazaios going 21.10 on back.

With one day of racing to go, it’s still Indiana leading team points. They are 19 points up on Texas and 33.5 ahead of Cal, with NC State and Florida mostly relegated to fighting for the 3-5 spots tomorrow:

And the second when Dean brings it home in a negative split.

Dressel is really good, but a sub 40.00 100 fly? Only Dean Farris can do that. And Schooling. with a dragshort on. in practice

I was joking that Dean would go out under 40 in the 200 and come back faster.

Dressel won’t go 40 tonight…but he’ll get closer than any mammal without a blowhole should.

Are you from the future? Can you let us in on when Caeleb went in the Fly tonight?