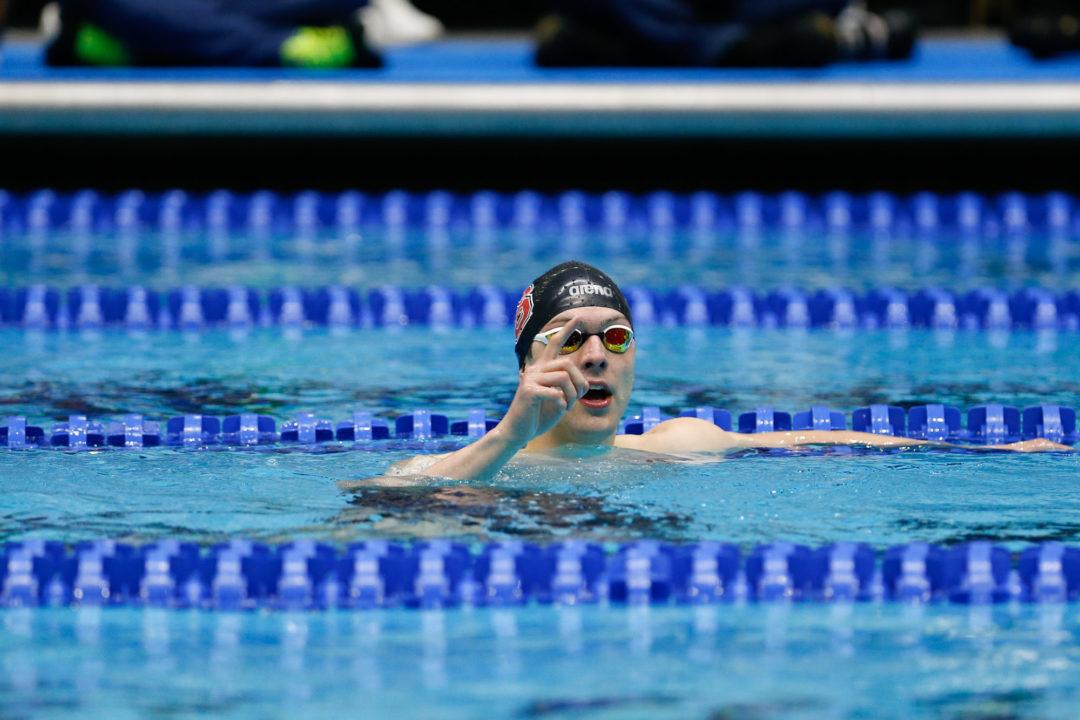 The 2018 NCAA Championships should culminate in duel between NC State and Texas that could see the 2:45 mark broken in the 400 free relay. Current photo via Tim Binning/TheSwimPictures.com

The final race of the 2018 NCAA Championships should be one of the most exciting races of the meet for a few different reasons.  Last year, the Texas Longhorns put a cherry on top of their championship sundae by winning this event in NCAA and U.S. Open Record fashion.  Last month, the NC State Wolfpack put the Longhorns on notice by throwing down the 2nd-fastest time ever, and an American Record, at the end of a meet at which several of their top stars didn’t appear to be fully rested/shaved.  There’s a good chance that both teams could go under Texas’s time from last year Saturday.

Additionally, we’re expecting the battle for the team championship to be a close race between Texas and Cal, and unlike previous years, where Texas could have won the overall title without even swimming this event, it could be close for this race to make a difference.  Finally, this figures to be Caeleb Dressel‘s last chance to swim a 39-something 100 free, if he hasn’t done it yet earlier in the meet.

Of course, NC State’s time from ACC, a 2:45.69,  puts them at the top of the psych sheet.  Ryan Held led off that relay with a 41.45 (with a beard), Justin Ress split a crazy 40.87 after him, and  Jacob Molacek, and ACC breakout star Coleman Stewart both split under 42. Remember, it was two years ago in this race that the current NC State squad earned their first NCAA relay title by just touching out Texas, and after finishing 7th last year, you have to assume that Wolfpack is going to be coming into the final night very motivated.

Last year, Florida was in the lead for 3/4 of the race, thanks to a 40.48 leadoff leg by Caeleb Dressel, plus strong splits by Jan Switkowski and Maxime Rooney before Joseph Schooling finally was able to run down Mark Szaranek the last 100.  All four Gators swimmers return this year, although Khader Baqlah swam in Switkowski’s spot at SECs last month.  Their time of 2:47.06 from SECs puts them 2nd on the psych sheet this year.

Texas comes in seeded with a 2:48.35 time from the Big 12 Championships.  They return 3/4 of last year team, after losing Jack Conger and his 41-low split.  That’d be a big deal for most teams, but the Longhorns still have Townley Haas, Brett Ringgold, and Joseph Schooling.  Add in Tate Jackson, who split 41 in prelims last year, then went 41.2 at Big 12s last month, and you’ve got three swimmers who all have 41-something flat starts, plus Joe Schooling, who  split 41.1 in 2016 and 41.0 last year.  On paper, this is a team that’s capable of a 2:44-mid on this relay.

The Cal Bears have the 4th-fastest time this season, a 2:48.42 from back in December.  That squad featured three of the four men who swam this relay at NCAAs last year: Justin Lynch, Michael Jensen, and Andrew Seliskar.  The Bears lost Ryan Murphy, who was a reliable sub-42 split, but they brought in freshman Ryan Hoffer, who went 41.23 as a highschooler.  Cal finished 4th at NCAAs last year, and that looks to be about where they should be again this year, given the strength of the first three schools.

Auburn sits 5th on the psych sheet this year, and appears to be in a better position than they did last year, when the Crimson Tide missed the A-final.  They’re led by returners Zach Apple and Peter Holoda, who registered 41s on this relay at SECs last month.  Liam McCloskey and Hugo Gonzalez both split 42-high at SECs, where the Tigers finished 2nd behind the Gators with a 2:48.58.

The Indiana Hoosiers have one of the best freestylers in the country in senior Blake Pieroni. Classmate Ali Khalafalla split sub-42 at NCAAs last year, but he’s been rather quiet this year, and he wasn’t on this relay at B1G champs.  Still, Mohamed Samy went 42.15 leading off this relay last month, Vini Lanza is good for a 42-split, and freshman Bruno Blaskovic has been solid this year.  The Hoosiers are seeded 6th with their 2:48.81 win from the B1G champs.

Last year, Ohio State was seeded 6th in this event and ultimately finished 15th.  They’re seeded 7this year.  They finished 2nd behind Indiana at B1G champs, with freshman Paul Delakis, who’s also a 200 breast guy, leading off in 43.0, and Matthew Abeysinghe, Andrew Loy, and Mossimo Chavez all splitting under 43.  If the Buckeyes have managed to hold their taper, or otherwise replicate their 2:50.12 time from last month, they should be right on the edge of making the final.  Last year, 4th-8th in prelims ranged rom 2:49.26 to 2:49.64.

Seniors Santo Condorelli and Dylan Carter give the USC Trojans a solid 1-2 punch at the top of this relay.  Ralf Tribuntsov also returns from last year’s 3rd place relay.  Reed Malone graduated, and while freshman Justin Nguyen took the 4th spot on the A-final relay at Pac-12s, Robert Glinta was faster than Nguyen on the B-relay.  USC is seeded 8th, with its 2:50.18 time from Pac-12s just a bit faster than last year’s seed time.

It’s a bit hard to decide what to make of Stanford — they return three of four legs of last year’s 5th place relay, and they’re seeded almost two seconds faster than last year, but they do look to have taken hit after losing Tom Kremer and his 41.89 split to graduation.

4 Deans could win no problem

I would love to see the Team title come down to this relay!