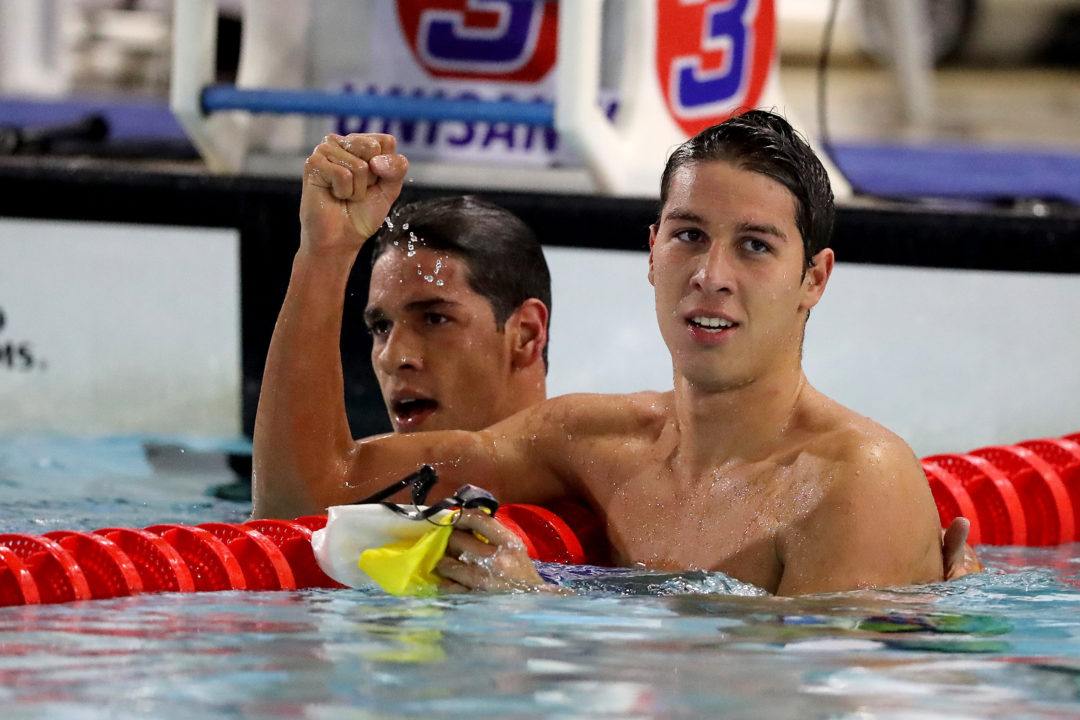 In a field laden with seniors, freshmen Brandonn Almeida and Hugo Gonzalez have a shot at the podium. Archive photo via Satiro Sodre/SS Press

With last year’s fourth-place finisher Gunnar Bentz (injury) failing to secure an invite in this event and not looking like he’ll pull off an upset in his bonus event, and 2017 champion Chase Kalisz graduated, the men’s 400 IM is set to see some fresh faces in the A final.

Auburn Freshman Hugo Gonzalez had an absolute breakout meet at the 2018 SEC Championships. Though he was overshadowed by Caeleb Dressel‘s 1:38.31 in the 200 IM, Gonzalez threw down a 1:40.67, tying him with Mark Szaranek as the 10th-fastest performer of all-time. He went on to win the 400 IM at that meet in 3:35.76, almost two seconds ahead of Szaranek, the #3 performance of all-time — making him the #2 performer behind Kalisz. However, the monster swim was a 3.52-second drop off of his previous best, so it’s unclear whether he’ll be able to match it, let alone improve, next week.

Florida senior Mark Szaranek, on the other hand, has over the last two years proven to drop time between SECs and NCAAs: in 2016 he dropped two seconds between the meets, and in 2017 he dropped a few tenths. He went 3:36.31 at NCAAs last year after going 3:36.54 at SECs — but Caeleb Dressel himself said that Szaranek had yet to drop down his yardage before going 3:37.50 at SECs this year.

Last year, Cal junior Andrew Seliskar went 3:39.53 at Pac-12s before going 3:36.18 at NCAAs. This year, he’s already been 3:38.65, pointing to good things to come at NCAAs. He, Szaranek, and Gonzalez are the top contenders for the podium, we can’t count out South Carolina freshman Brandonn Almeida, who went 3:39.08 at SECs. Due to issues with NCAA eligibility paperwork, Almeida only made his college debut this semester and has only swum two SCY 400 IMs in his life — both of them were in February. His LCM time of 4:13.00 that placed him 7th at the 2017 FINA World Championships converts to 3:36.59 in short course, so consider him a real podium threat.

Finally, seniors Jonathan Roberts and Anton Ipsen. Texas’ Roberts took sixth in 3:38.18 at 2017 NCAAs, but barely secured an invite this year with his 3:43.72 entry time, swum at the 2018 Big 12 Championships. Granted, we don’t know what his rest was like for that meet. NC State’s Ipsen is in the midst of perhaps the best season of his life — he dropped substantial time every event at the 2018 ACC Championships (including his 3:40.48 400 IM), we can be pretty sure he wasn’t well-rested (check out this tweet). Last year, he was 3:44.77 at ACCs, and lowered his time to 3:41.57 at NCAAs, so expect a drop at his final NCAAs.

If you look at the psych sheet, you’ll see sophomores Charlie Swanson and Ted Schubert are entered with 3:39.16 and 3:39.52, respectively. But both dropped considerable time (read: “insane” for Schubert) at their conference championships. Swanson dropped from 3:41.13, while Schubert dropped over 7.5 seconds, from 3:47.52, so it seems somewhat unlikely that they can match their conference times.

This promise is just meaningless. How could you know who the upvoters are and whether they upvoted it before or after the race? And how would you give the upvoters that money? Actually the upvoters may not even want to waste their time simply asking a dollar from you. You know you won’t have to pay anything even if your prediction goes wrong.

it a joke calm down

you must be fun at parties

I can see Szarenek or Seliskar beating Gonzalez, but Gonzalez in 5th behind Devine and Almedia? I don’t think so.

Yeah no way. I can see it being a battle between Seliskar, Gonzalez and Szarenek . With a 3:35, Gonzalez is not going to finish 5th. He is a freshman so maybe the lack of experience might get to him but he will definitely be on the podium

Seems like a stretch for Gonzalez to go from just becoming the second best performer ever to 5th in the final.

I wonder why the author of this article believes Gonzalez will add around 3 seconds to get 5th? Maybe the author knows something we don’t

it’s not so much that I think he’ll add 3 seconds. He might add one or two but if the four other guys have good swims they’ll be in the 35-37low range. He could be there too, but after that big drop I’d be somewhat surprised if he repeats.

Is that what they’re racing in?

Jay is the fastest at Long course….4:09 He beat Lochte so if anyway has a chance to make moves

or…. he will finish 7th in his heat in prelims…

3:35.76. Sencond best performer ever. Double world junior champion in this event long course, 2015-2017. Yes, it would be somewhat surprising if he “repeats”

He would have to add 3 seconds to go a 3:38 for 4 other swimmers beating him. I highly doubt 4 swimmers not Hugo are going 3:38 or faster.

Guess we overestimated him.

Know I’m going to get some hate here, but should you really be a “freshman” if you can legally buy a drink at the hotel during the meet? Just sayin’. On the other hand, huge props to Hugo Gonzalez swimming that fast having just barely turned 19.

I think he just turned 18 actually.

Multiple sources (including SWIMS DB) have him at 19. Birth date in Feb 1999.

agree with the commenters, why would Hugo drop to fifth, any real reason? 3:35 is crazy fast and as a young freshman he is probably hungry for more

Swanson and Schubert will rise up. This isn’t their first rodeo with these guys. True talent and certainly accomplished champions. Both Club teammates at NOVA Aquatic with Texas’, Townley Haas. They know how to win and just might thrive as underdogs………

And Swanson’s “big” drop came in a time trial… I think in a heat with legitimate competition, he will go faster than his 3:39!!

Schubert’s drop came in a time trial. Swanson’s as he claimed the Big12 Conference Swimming Championship.

oops… getting those fast NOVA boys mixed up…..

Hugo Gonzalez can swim all the strokes. He’s can even swim the breaststroke leg in 1:00. At the SEC meet, he took the lead in the backstroke, and then no one could close the gap in the breast and free.