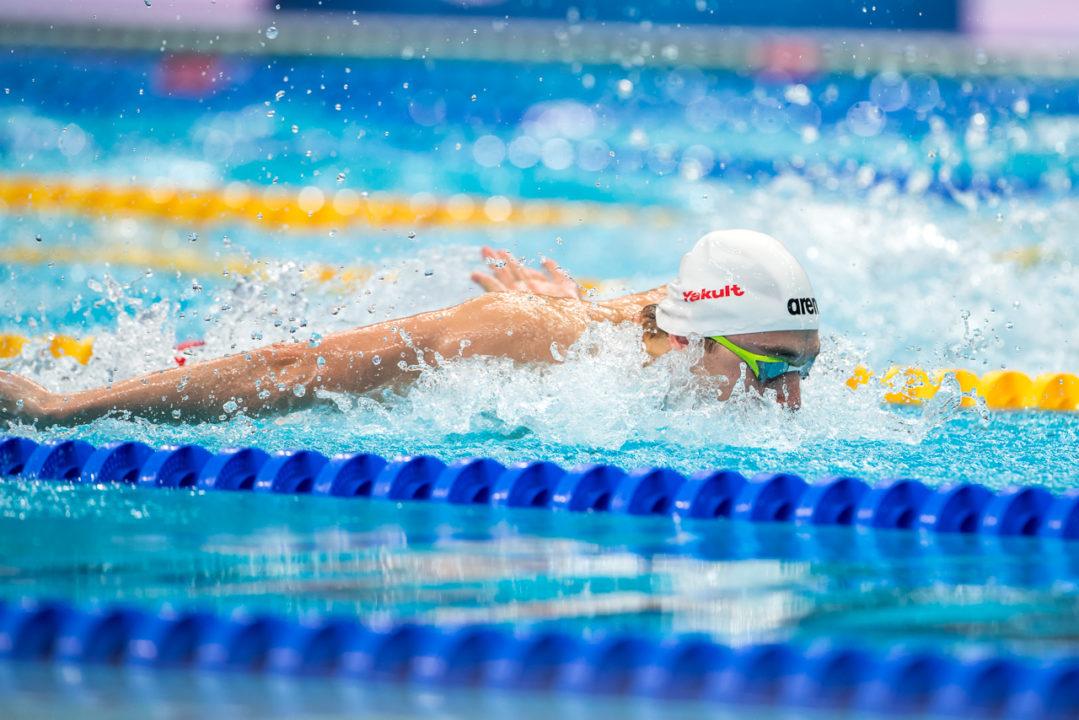 The second preliminary session from the 2018 European Championships in Glasgow will feature the men’s 100 freestyle and 200 butterfly, the women’s 100 breast and 50 back, along with the mixed 4×200 free relay and the men’s mile.

After the 400 free relay on day 1, we already have an idea of what type of form the male sprinters are in, with Alessandro Miressi standing out the most after splitting 46.99 on Italy’s anchor leg. He’ll swim in the final heat of the morning alongside countryman Luca Dotto and top seed Mehdy Metella of France. Also splitting sub-48 on the relay was Vlad Morozov, who will swim in the penultimate heat alongside countryman Danila Izotov and Hungarian Dominik Kozma, and Kristian Gkolomeev, who will contest heat 7 where Duncan Scott will have lane 4.

The women’s 100 breast will be the meet debut for Yuliya Efimova, who leads the world rankings this year in 1:04.98. She’ll be looking to put up a time that will hold up as the fastest of the year, with Lilly King likely to hit a 1:04 at Pan Pacs in less than a week. We’ll also see 2012 Olympic champ Ruta Meilutyte, who showed she was on good form on day 1 by breaking her own National Record in the 50 free.

We’ll see some more marquee names hit the water for the first time in the men’s 200 fly, led by a trio of Hungarians. Olympic bronze medalist Tamas Kenderesi will swim in heat 2, 2015 World Champion in the event Laszlo Cseh will go in heat 3, and the fastest man in the world this year Kristof Milak headlines heat 4. Only two of these three will be able to advance to the semis, so look for them to throw down some quick times. James Guy will also swim his first individual race of the meet after a very solid prelim relay split on day 1.

Anastasiia Fesikova, Georgia Davies and Mie Nielsen headline the women’s 50 back, and Fesikova’s Russian teammate Mariia Kameneva will also be dangerous after breaking the National Record in the 50 free on day 1.

There are only eleven entries in the mixed 800 free relay, which makes it’s debut here, and thus it will be interesting to see how big of a risk teams are willing to make in leaving off their top guns in the morning. With the likes of San Marino, Estonia and Israel entered, the top teams shouldn’t have any trouble advancing.

After winning the 400 in a best time, Mykhailo Romanchuk will certainly cruise through heat 2 of the men’s 1500, with Gregorio Paltrinieri facing off with Florian Wellbrock in heat 3.

Props to Cseh for sticking around as a 32 year old

Lazlo not recovery yesterday 400free. This was bad. +30 swimmers can not doing hard race each day. Between two hard start is must one or two rest day.

Dont forget about Bence Biczó, he will also have a shot at it.

The question of which finger would you bite.