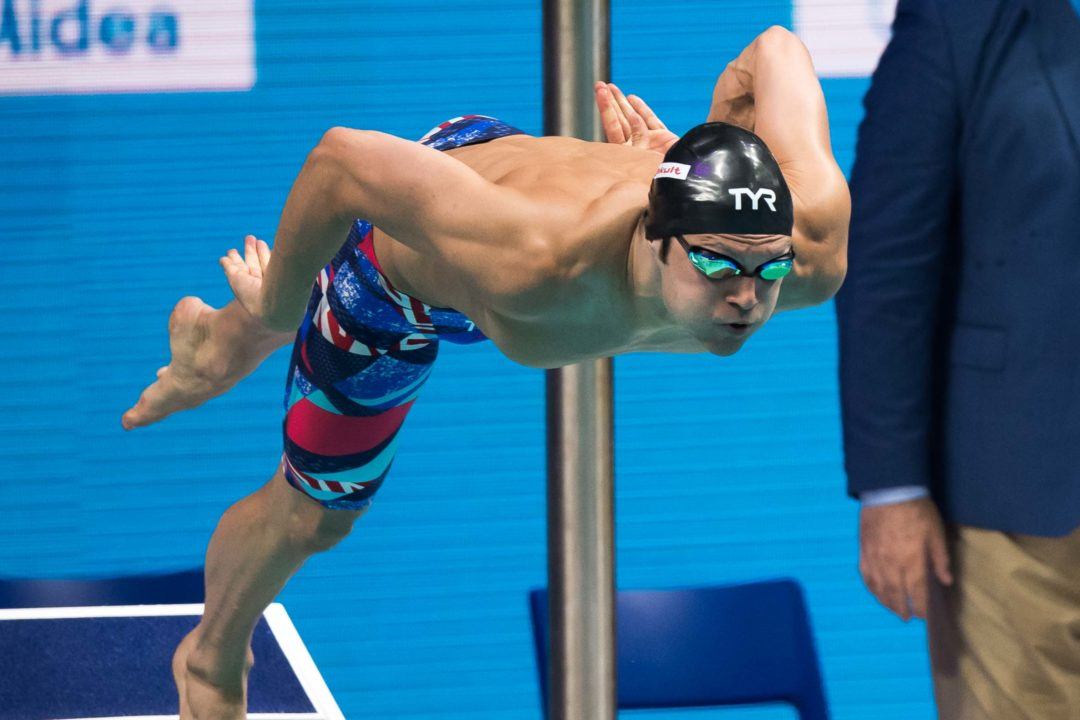 Return of the breaststrokers: with Cody Miller and Kevin Cordes back in action, the dynamics of the SwimSquad roster battles change drastically. Check out our team-by-team projections for Atlanta. Archive photo via Mike Lewis/Ola Vista Photography 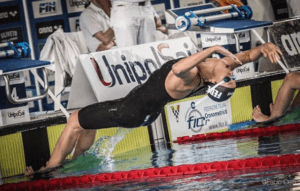 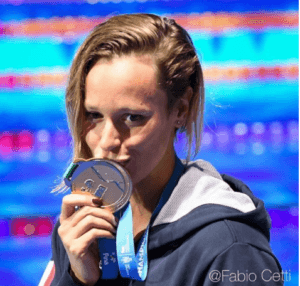 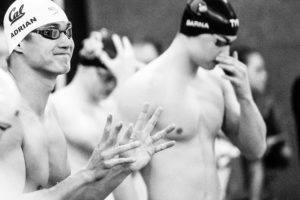 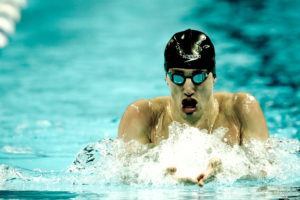 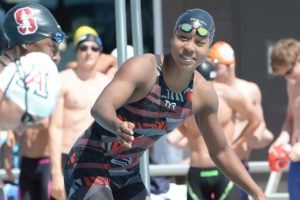 Lia Neal Has Traveled More Than You This Fall (Video)

Before competing in Atlanta this past weekend, Lia Neal has been… pretty much every other place in the world you can imagine 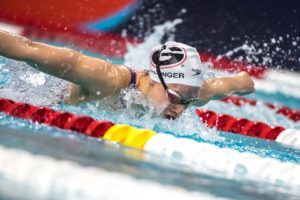 Hali Flickinger and Kelsi Dahlia Worrell were neck-and-neck, 1:02.26 to 1:02.31, at the halfway mark. Flickinger pulled ahead through the back half, winning gold with the #3 time in the world this year

The Atlanta stop of the 2018 Pro Swim Series kicks off tomorrow morning, and it’s time to project each SwimSquad’s starting lineup.

There are no stroke 50 shootouts in Atlanta, nor are there mixed medley relays to project. That means the scoring meta shifts a bit more to favor rangy types, without 50s of most strokes to pad points for sprinters. In Austin, every team used at least one starter in a stroke 50 – Team Krayzelburg was reliant on the sprints, starting Olivia Smoliga (50 back), Nic Fink (50 breast), Amanda Kendall (50 fly) and flex-man Matt Grevers (50 back) to ultimately win the Austin points by 19.

Team Coughlin had just a single starter in a stroke 50 (Molly Hannis, 50 breast), as did Team Sandeno (Katie Meili, 50 breast), while Team Lezak had two (Tim Phillips, 50 fly and Justin Ress, 50 back).

In Atlanta, most of the top college athletes are not entered, providing a big boost to teams who favored pro athletes in the draft. While active rosters were pretty even in Austin, this time around, Jason Lezak will have his pick of 11 athletes, while Natalie Coughlin and Kaitlin Sandeno only have 10 active swimmers from which to pick. Lenny Krayzelburg will have the toughest time selecting a starting lineup with only 8 swimmers active to fill 6 starting roles.

Though the Krayzelburg Squad is short on depth this week, they’ve still got a pretty impressive lineup. The first few spots are easy. Olivia Smoliga is the only active swimmer on the roster swimming any backstroke, so she has to be the back starter despite only swimming the 100. Kelsi Worrell is the only swimmer in two fly events, so she’s a natural fit for the fly starter. Chase Kalisz is as sure a thing as there is for 20 points in the IM events, so slot him in there.

The freestyle spot is a question mark, and comes down to distance swimmer Ashley Twichell or sprinter Amanda Kendall. Kendall swam great in Austin, but also splits her focus with butterfly. Her events are much tougher this time around, too, with world record-holder Sarah Sjostrom in town along with Canadian youngsters Penny Oleksiak and Taylor Ruck. We’ll go with Twichell in the softer distance events, even though this will be her first long course meet of the season and it’s hard to know what to expect.

Krayzelburg has a tough choice on breaststroke. Will Licon confirmed that the Texas pros are tapering for Atlanta, which makes him the best option here, but it makes sense to use either Nic Fink or Breeja Larson in the flex spot to double-dip on this great roster of breaststrokers. (A second option would be to use Licon as a flex and include one of his great IM races, but it’s hard to predict whether his IM will be significantly higher scoring than either breaststroke).

Team Lezak has a league-high 11 swimmers active, and yet not a single one is swimming a single event backstroke. That’s a big downer that means Lezak will forfeit any points out of the backstroke starting spot. (We’re hoping he technically ‘starts’ one of his breaststrokers as a joke, because who doesn’t want to see Kevin Cordes listed as a starting backstroker?). That starting depth is great, but is really stacked up in breaststroke and freestyle, creating some tough decisions for Captain Lezak.

Mallory Comerford is listed on the psych sheets, but it seems somewhat unlikely she’d go compete in long course just two weeks out from her NCAA Championship meet (though she did it last year). We’ll assume Lezak has the inside info on whether Comerford will swim or not, and we’re not including her in our starters. Lezak has plenty of other options as it is. Nathan Adrian is the obvious free choice, a consistent machine of a sprinter who puts up points every time he enters the pool, and a better start than Comerford with Sarah Sjostrom swimming in Atlanta.

The fly is a tough choice. Pace Clark scratched out of Austin and hasn’t competed since October. Cassidy Bayer has been pretty good this season, with a season-best in the 200 fly that would have been 4th in Austin. We’ll go with Bayer, narrowly.

The breaststroke decision is made a little easier by taking Josh Prenot out of the mix and slotting him in as the IMer. Team Lezak has nobody else entered in two IM races. Then the breaststroke comes down to a choice between Olympians Kevin Cordes and Cody Miller, with the other joining a competition with Clark Smith and Pace Clark for the flex spot. We’ll take Miller (who is generally very good in-season) and Smith, though any combo of those guys is pretty formidable.

If Comerford does indeed compete, she probably replaces the flex guy, with great scoring chances in the 50 free, 100 free and 200 free.

Team Coughlin is built on versatility, and she has a challenge every meet to decide where to slot in multi-discipline talents Melanie Margalis, Hali Flickinger and Madisyn Cox. You have to find a starting spot for all three or risk giving up major points. Margalis should be the top female IM scorer after winning the 400 and taking 2nd in the 200 to the now-absent Sydney Pickrem in Austin. Cox was 2nd in the 400 and 3rd in the 200 in Austin, so she fits well as a flex play.

We’ll add Flickinger to the fly. Tom Shields was downright awful in Austin (1:00 in the 100 fly followed by a full-meet scratch), so the question is whether he was fighting a bug at the time and how healthy he is for Atlanta. Flickinger is the safer bet in fly, though Shields might be a more high-ceiling choice.

Molly Hannis is the only other breaststroker on the roster. Ryan Murphy is a no-brainer starter in backstroke, especially with Matt Grevers absent. That leaves freestyle, where we could enter Shields again or go with sprinter Michael Chadwick (who hasn’t swum long course yet this season) or distance swimmer Erica Sullivan (who is entered in 7 events in Austin).

Here’s the issue for Team Sandeno: she’s rostering two of the best distance freestylers in the nation (Leah Smith and Zane Grothe), but also has a tailor-made flex play in Michael Andrew. Fitting all three into the starting lineup is difficult. Luckily this month, the problem is solved by a lack of IMers. Sandeno only has Andrew and Conor Dwyer with IM swims, and both are only entered in the 200. That makes Andrew a natural IM starter (even though we’re giving up big potential flex points in his 50 free) and allows Sandeno to start Smith at free and Grothe at flex (or vice-versa).

As an aside, we’ll take the 400 and 800 for both Smith and Grothe given the propensity for swimmers to scratch the 1500 in-season. That’s especially true with the miles being bumped to their own session on Sunday morning, when many athletes may elect to fly home instead.

That just leaves butterfly, where Sandeno has a choice between two talents. Jack Conger won the 100 and was 3rd in the 200 in Austin, so he’s probably a higher-scoring bet than Gibson, who was 7th in the 100 and 8th in the 200.

Top to bottom, Sandeno’s starting lineup looks the deepest by far. She’s the only one not starting an iffy choice at at least one position and probably has the best potential for big points. Both Coughlin and Krayzelburg have a handful of potentially huge hitters with one shaky spot or two. Things should get a lot closer between those three teams after Atlanta, but we’ll project Krazyelburg hanging onto a lead with dead-even Sandeno and Coughlin right behind.

Lezak’s team is going to be hurt by the lack of a backstroker (maybe he can pull off a late-breaking trade for Taylor Dale or Ali DeLoof?) and is already staring down a 40-point deficit against Krayzelburg. He’s going to have to hope for a triumphant entry from Kathleen Baker or Justin Ress after NCAA season to get back in the hunt over the final four stops.

Here’s our full projected scoring breakdown. Bear in mind that we’re not fortune-tellers, so these are only our best first-glance projections based on how swimmers have swum at this time in past seasons, how well they swam in Austin and how the psych sheet looks in their events:

I like this addition to the series. The shootout 50s were also cool. The mystery IM is a little weird but different, wouldn’t want to see it at every meet but kinda cool to watch.

A clarification question: when the captains choose a swimmer for that squad do they also have to designate the events that they score in or is it just the top two events in that category they score in. This would mostly apply to flex swimmers but if you have a swimmer in 50/100/200 stroke do you have to choose just two?

Swimsam – good question. The captains have to choose which two events will score for every swimmer in advance. So in Austin, they had to choose between 50, 100 and 200s of each stroke, and in Atlanta, they will have to select two events ahead of time for their flex play.