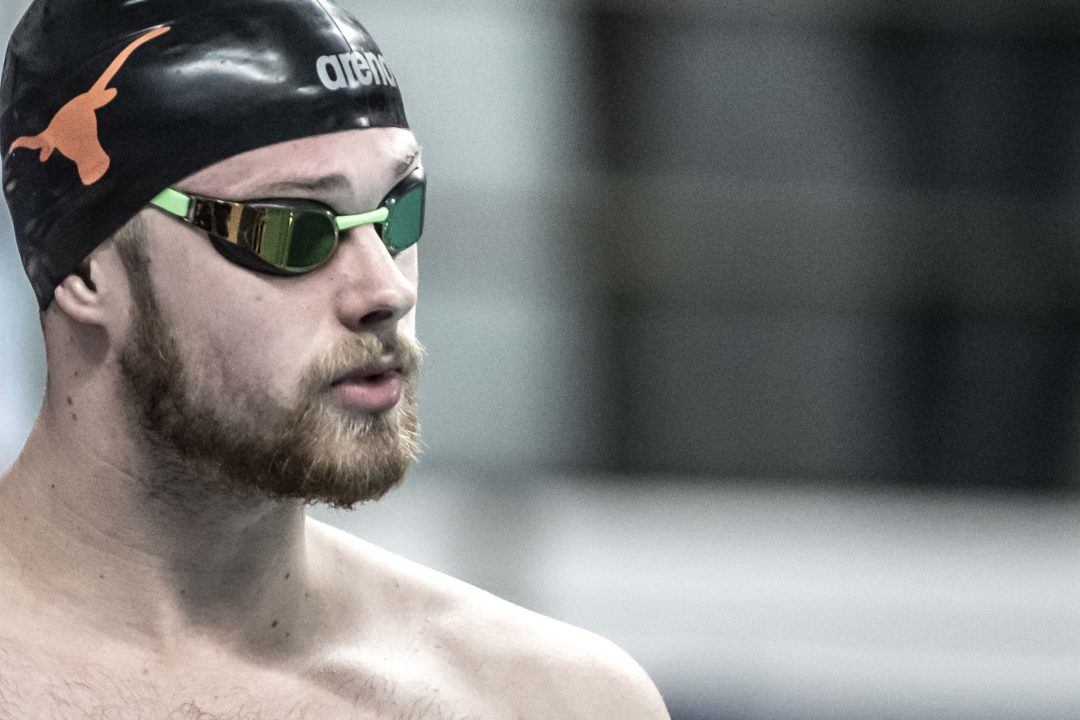 Jack Conger shot to the top of world rankings in the 100 fly with a lifetime best of 51.00. Archive photo via Mike Lewis/Ola Vista Photography

As per usual, there was a lot of fast swimming at the latest TYR Pro Swim Series stop. In Atlanta, age groupers, high school standouts, national team hopefuls, and Olympians clashed– here’s a quick, hit-by-hit, and by no means comprehensive recap of the big things that stood out to us from the meet.

U.S. National team-ers Andrew Wilson and Jack Conger upped their game at this meet, hitting personal bests and shooting up the world rankings in long course.

Wilson, a star for Division III Emory who is currently training with the Texas pro group in Austin, is setting himself up to make the Pan Pacs roster this summer. Wilson was 2nd in the 50 breast and 4th in both the 100 and 200 breast at the 2017 U.S. Summer Nationals, just missing the World Champs team. In ATL, he posted best times of 59.19 in the 100 and 2:08.52 in the 200– he’s now third in the world this year in both races, making him the highest-ranked American in both events right now.

Meanwhile, Conger is making a move to be a major American player this summer. Conger dropped a lifetime best 51.00 in the 100 fly to win the race in ATL, shooting him to the top of the world rankings this year. Additionally, Conger was 1:55.88 in the 200 fly to take 2nd behind Chase Kalisz and 1:46.96 to win the 200 free by over a full second.

#2 SARAH SJÖSTRÖM RACES FOR A DAY, WITH MORE EUROPEANS IN TOW

On her way to clinics on the east coast of the United States, Swedish star Sarah Sjöström raced the 100 free and 100 fly on the first day of competition in ATL.

A couple other Swedes raced over the weekend, including national record holders Simon Sjödin and Erik Persson. Other European standouts to compete included Ukraine’s Andrii Govorov, Russia’s Vladimir Morozov and Yulia Efimova, and Hungarian Liliana Szilagyi. Italy’s Federica Pellegrini made an appearance, too.

Rose has since aged up out of the 13-14 age group, but he has progressed considerably since as recently as this summer. Check out how fast he’s gotten over the last three seasons, and how much faster he already is in 2018 compared to 2017.

What does it mean? Where’d she come from? Your guess is probably as good as mine. But the more we see the Wang Jianjiahe‘s, Bingjie Li’s, and Ariarne Titmus’s of the world climbing closer and closer to Ledecky’s times, the more pressure she’ll have to beat, match, or at least come very close to her bests. Ledecky’s throne isn’t in jeopardy, but Wang Jianjiahe‘s arrival spells trouble for the growing cluster of young distance swimmers trying to make international podiums.

To be fair it would be nice to mentioned that Ledecky’s 4:04.34 at the age of 15 was shown during her 800 race in London. I think that everybody agree that should she swim 400 only without keeping in her mind that she has to do 400 more at the decent speed then her time would under 4:04 and even under 4:03 and maybe even faster

katie will more than likely be there

Sure, but if previous years she could swim casually 8:19 for the win then now more efforts will be needed.
It is like “Tiger effect”. It was statistically proven that tournaments with his participation showed higher level of performances from other players. Whoever will swim against Ledecky will try to do their best regardless if there is or there isn’t a chance to challenge her.

Am I the only one who thinks she could swim up to and including the 2020 Olympics and disappear off the map and quickly as she appeared?

Looks like he’s coming down in distance but he’s still more of a 200 guy than a sprinter. Hard to say if fly or free will be his best.

WANG JIANJIAHE has a lot of potential in the 400 free. Look for her in the WC and Olympic finals.

She and Li Bingjie will have each other to race in China, so that may push them closer to the 4:00 barrier.

Underwater video of her stroke during the races showed a lot of graceful movement & streamlining. It was impressive to see her swim. Also, she is quite big (tall & muscular).

Jianjiahe, Bingjie, And Ai Yanhan all have beautiful freestyle strokes, especially Yanhan. I wonder if they all train together?

for #1 didn’t the texas guys say they did rest/taper.. and why would conger care about NCAAs being “a couple of weeks away” ?

Yes, but throwing down big pb’s and world leading times sure deserves comment…

Of course, not even for the Olympics. Every Texas swimmer is building for when they finally gloriously taper for the final swim meet of the Gods, located in Valhalla. Until then, every single Texas swim is completely unrested, and untapered.