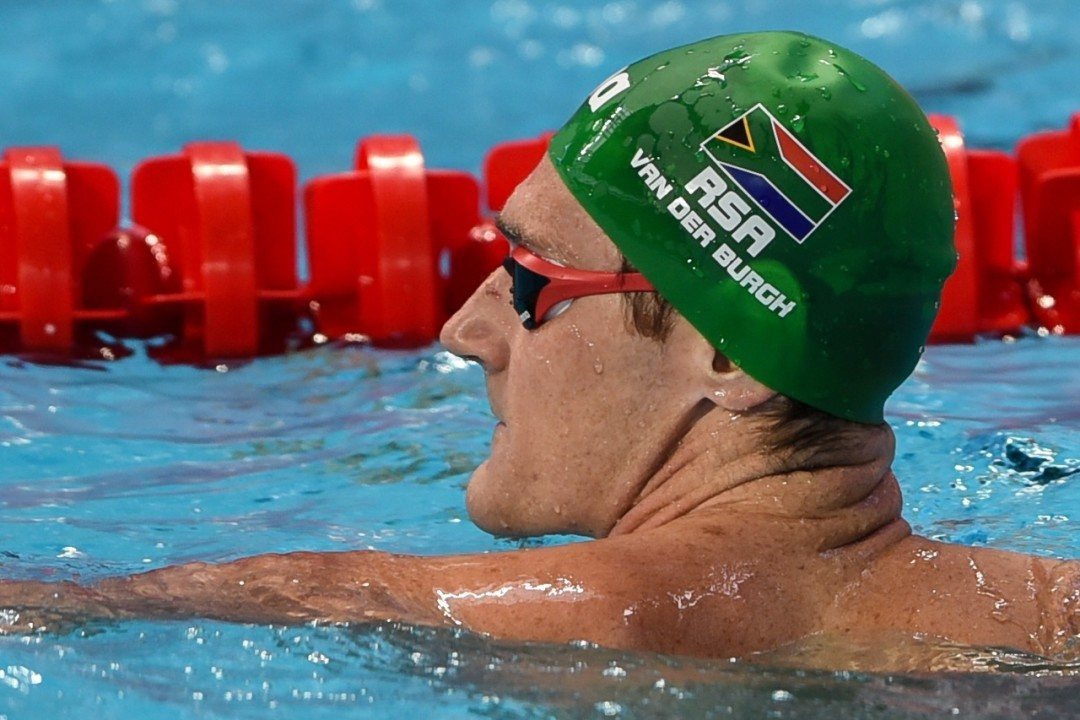 Arguably the biggest storyline from the continent of Africa on day 1 was one that didn't happen: Olympic champ Cameron van der Burgh elected to scratch the 100 breaststroke prior to heats, taking out what was very likely the continent's biggest medal threat of the first two days. Archive photo via Peter Sukenik/www.petersukenik.com

Arguably the biggest storyline from the continent of Africa on day 1 of the FINA World Championships was one that didn’t happen: Olympic champ Cameron van der Burgh elected to scratch the 100 breaststroke prior to heats, taking out what was very likely the continent’s biggest medal threat of the first two days.

Van der Burgh was the 2012 Olympic champ and 2016 Olympic silver medalist in the 100 breast, and was once the most dominant breaststroker on the planet. He’s been supplanted in that role by Great Britain’s Adam Peaty, but was still very much a potential medalist in Budapest. The 29-year-old van der Burgh hasn’t had a great year in the 100, only going 59.73 at South Africa’s national meet in April.

That leaves van der Burgh pretty much all-in on the 50 breast, which takes place Tuesday and Wednesday. He’s currently ranked #5 in the world this season in that event, and just over a tenth out of second:

While van der Burgh was the most notable absence, probably the best swim of the day came from Egypt’s 4×100 free relay on the men’s side. Ali Khalafalla, Mohamed Samy, Youssef Abdalla and Mohamed Khaled combined to smash their national record by two seconds, taking 15th out of 20 teams. Though relay entries are much lighter this year, Egypt is starting to hone in on the top 12, which typically earns Olympic relay berths in the World Championships directly prior to an Olympic year. That should make the field a lot deeper and more serious in 2019, but Egypt is starting to make a push in that direction, rising to become the kind of solid swimming roster that no nation in Africa outside of South Africa can currently boast.

Though we can’t say for certain that we caught every record (and though many nations don’t have well-maintained databases of their official national records), here’s a look at all the national records we found in day 1’s prelims and finals sessions. If you find one we missed, let us know and we’ll work to verify it.

One more correction… I know the federations don’t keep the records up. Ralph Goveia was 24.33 at South African Nationals in April in the semi-final heat. That’s the actual Zambian Record.

While the Egyptian relay was VERY good, I think Marwan Elkamash’s 9th is place and Egyptian Record in the 400 Free was even more impressive.

You realize Serbia is in Europe, right?

I can see it from my house.

Ups, didn’t realize it was Africa only article… sorry. I’ll wait for another chance to be a smart ass 🙂

Somehow I doubt this is the biggest story line on the continent of Africa today.