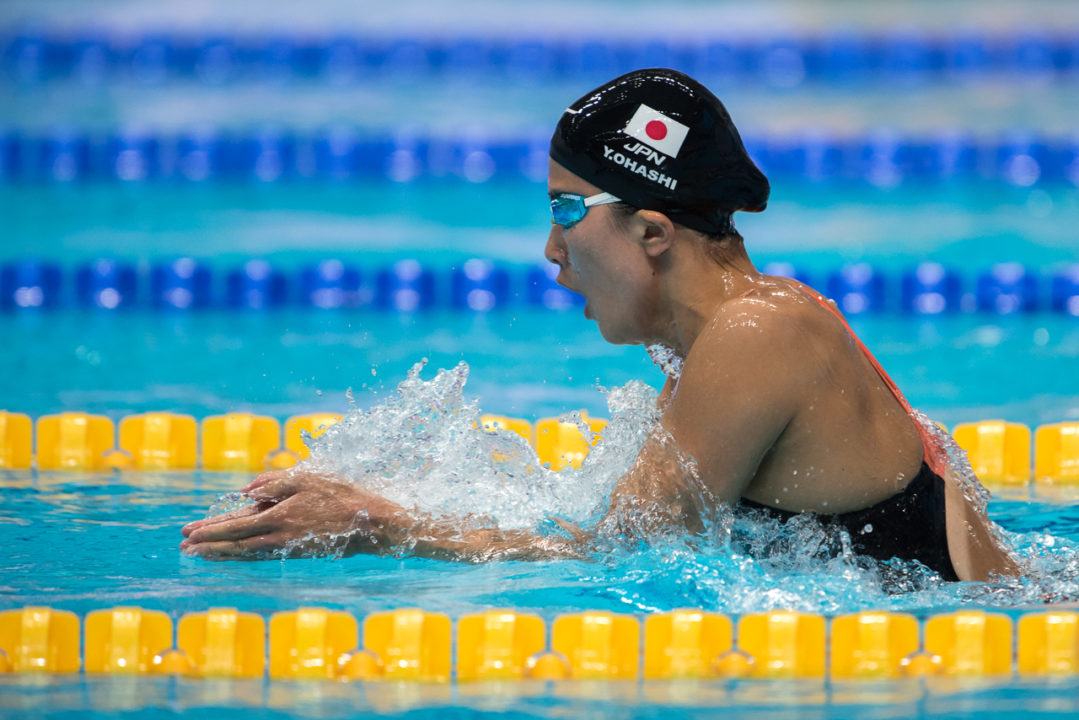 It's day 4 of the Summer Universiade (also known as the World University Games) in Taipei, and tonight's finals session schedule is loaded with big events, including the 200 IM led by Japan's Yui Ohashi. Archive photo via Peter Sukenik/www.petersukenik.com

Ali Deloof will compete for gold in tonight’s 50 back final.

Japan’s Kanako Watanabe brought home a gold in the 200 breast, but Olympic gold medalist Ryan Held (100 free) and Hellen Moffitt (100 fly) brought in 2 wins for the Americans to bring it to a tie between the 2 countries with 6 gold each.

Katie McLaughlin will race the women’s 200 fly on day 6 at the World University Games.

It’s day 4 of the Summer Universiade (also known as the World University Games) in Taipei, and tonight’s finals session schedule is loaded with big events.

Keep refreshing this page for live, event-by-event updates from Taipei, and follow @SwimSwamLive on Twitter for more up-to-the-second highlights of all the swimming action.

Italy completed a sweep of the men’s and women’s 1500 frees as Simona Quadarella went 15:57.90 to pick up the women’s win this morning. Quadarella was the bronze medalist at Worlds, and here was only about 4 seconds off her third-place time from Budapest.

Germany’s Sarah Koehler kept her honest, swimming just a tick behind her but within striking distance much of the race. She snuck under 16 minutes for the first time in her career and took silver.

Japan’s Yui Ohashi was hundredths off of the World University Games record in semifinals, but she smashed it in the final. Ohashi rode her unstoppable back half to a massive win of 2:10.03, smashing two full seconds off of the meet record.

Behind her was a cloud of dust, with American Ella Eastin getting to the wall first. Eastin was 2:11.12, well over a second faster than she went in semis. She was a half-second up on Korea’s Kim Seoyeong, who led early but fell off on breaststroke. Kim was 2:11.62, with Japan’s Miho Teramura fading from the 2nd qualifier to 4th in 2:11.85.

Ryan Held won a tough second semifinal in 48.50 to lead all swimmers into tomorrow night’s medal final. He held off a surging Polish Kacper Majchrzak (48.68) as well as a pair of Brazilians: Gabriel da Silva Santos (48.71) and Pedro Silva Spajari (49.09).

The only other swimmer under 49 was Katsumi Nakamura, who won the opening semifinal for Japan. Ukraine’s Serhii Shevtsov and Russia’s Nikita Korolev both made the final from that opening semi as well, just on the other side of the 49-barrier.

The second American will also be in from the second semi. That’s Maxime Rooney, who went 49.16 and sits 7th. Great Britain’s Jack Thorpe and Hong Kong’s Kenneth To were the first men out after going 49.50 and 49.53 in semis.

Italy’s Elena di Liddo was the only woman under 59 seconds at semifinals, riding a big back half split of 30.49 to pick up the second semi win and the top qualifying spot in to the final. Also back-halfing the field was semifinal #1 winner Hellen Moffitt, who went 58.32 for the United States Moffitt was 30.90 over the final 50 meters, and those two were the only ones to come home better than 31.0. That sets up an intriguing matchup tomorrow night for gold.

The second semi was a bit faster, with 5 of the 8 finalists coming from that heat. Great Britain’s Rachael Kelly went 58.93 for the third-best time overall, and American Katie McLaughlin also made the final with 59.12. Japan’s Yukina Hirayama and Germany’s Aliena Schmidtke were pushing the pace early, and though they faded, they still made the final in 7th and 8th.

Out of the first semi, Daiene Dias (59.04) and Kinge Zandringa (59.19) both made the final, with Dias’ Brazilian teammate Daynara de Paula just missing the final in 9th.

American Andrew Wilson backed way off in the semifinals, but turned on the speed in the final to crush the field for a huge gold medal win. Wilson was 2:08.45, a tenth off his own meet record he set in heats. He beat out Olympic champ Dmitriy Balandin (2:09.70) by 1.3 seconds for that title.

Australia’s Sian Whittaker had already won the 200 back earlier in the week, so there was no doubting her back-half speed. And she proved it once again, back-halfing the field in a big way to win the 100 and complete a sweep of the Olympic-distance backstroke races in Taipei. Her 1:00.14 snuck by early leader Hannah Stevens of the United States (1:00.23) for gold. Whittaker came home in 30.71, two tenths better than anyone else in the field.

Stevens had the field’s best opening split at 28.92. She held on for silver, getting passed up by Whittaker but holding off Japan’s Anna Konishi (1:00.33) in a thrilling finish.

Back in April, Horomura was 1:55.37, which would have broken Li Zhuhao’s standing junior world mark, had Zhuhao not lowered the record by about a half-second two days earlier. Now the record belongs to Hungarian Kristof Milak at 1:53.79. Horomura – eligible to break that record through December – is just over a tenth off it with his winning time in Taipei. That record is significant in that it is legitimately faster than any junior in history has swum. Many junior world records are not yet faster than times swum by junior before FINA started tracking junior world records, but Milak (and now Horomura) are faster than Michael Phelps was at age 18 – a 1:53.93 that was believed to be the fastest junior time in history prior to Milak and Horomura.

Seto went 1:55.09 for second, with the two Japanese flyers well ahead of the field. Bence Biczo took third for Hungary in 1:56.16, topping Brazil’s Leonardo de Deus (1:56.29) and Russia’s Aleksandr Kudashev.

Japanese teammates Kanako Watanabe and Reona Aoki traded the lead back and forth in the second semifinal, but it was Watanabe who accelerated away late to take the top spot. Watanabe was 2:26.15 and will grab the middle lane for tomorrow.

Semi #1 went to South Africa’s Tatjana Schoenmaker in 2:26.50, which will hold up for the second-best time overall.

Aoki dropped back a bit in her semi, with hard-chargers Yang Jiwon (2:26.82 for Korea) and Mariia Temnikova (2:26.95 for Russia) rolling by late. The top 5 from that heat made the final, though, including Aoki and American Kayla Brumbaum (2:27.65).

Behind Schoemaker in her heat, Germany’s Jessica Steiger moved on in 2:27.81 after leading much of the way. And Russia’s Sophia Andreeva gives the Russians a pair of finalists after going 2:28.33. American Miranda Tucker was fourth in that heat and just missed the final after going 2:29.39.

Top semifinal qualifier Shane Ryan backed up his big early swims, going 24.72 to lower his own Irish record and win World University Games gold. He needed every hundredth, beating out American Justin Ress (24.73) by just .01. Both were only a tenth off the World University Games record set in 2009 by a super-suited Junya Koga.

Korea’s Won Youngjun took the bronze in 25.06, beating out the other American entrant, Taylor Dale (25.15).

The night ended with an entertaining back-and-forth showdown between Russia and the United States. The Russians tended to go out fast in each of their legs, but the patient Americans would climb back into the hunt late in the 200. Russia led early on a 1:58.84 leadoff from Anastasia Guzhenkova, but Team USA’s Claire Rasmus was 1:58.85 to trail by just a hundredth. Katie Drabot put the Americans into the lead with a 1:58.75 split, compared to 1:59.00 from Russia’s Valeriia Salamatina.

A tight battle for third turned into a blowout when Japan’s Yui Ohashi, also coming off the 200 IM, split 1:58.86 to push her relay to the bronze medal by about a second and a half.

Great Britain was third, getting a 1:59.60 leadoff leg from Kathryn Greenslade, and Canada took fifth, powered by a 1:59.66 anchor from Kennedy Goss.

Rooney must be the most consistent 49. freestyler this year – when is he gonna be in the 48’s ?

I don’t think that’s true. Dressel had massive drops during his freshman year and the summer afterwards in LC.
It really took him no time to blossom, and certainly not years. He’s just continued to have even more massive drops.
I think Rooney will be fine though.

I think he was talking mostly about his drops in the short course pool. Dressel took significant time off before going to Florida (almost a 6 month break if I remember correctly) so looking at his times the summer before going to college and the summer after he started college is going to be a little bit different for him than it would be for Rooney. While Dressel did immediately show some improvements, you could argue that it took until now for him to really shine in the long course pool, so maybe it will be the same in Rooney’s case.

German record for Sarah Köhler. KL in her current shape not too far away now.

Congrats to Stevens – Silver in 100 back

Went out fast and hung on. Looks like a smart adjustment to the race plan he tested in prelims–tonight he pushed the 3rd 50 and held rather than eased up on the 3rd to keep some in the tank for the end. Nearly identical time.

Well, Wilson’s strategy was somewhat similar to Baladin’s at the Olympics.

Ella Eastin got her silver at WUG, good.

She’s an excellent swimmer, but she’s better in SC than LC at this point. Probably due to her “underwaters.”