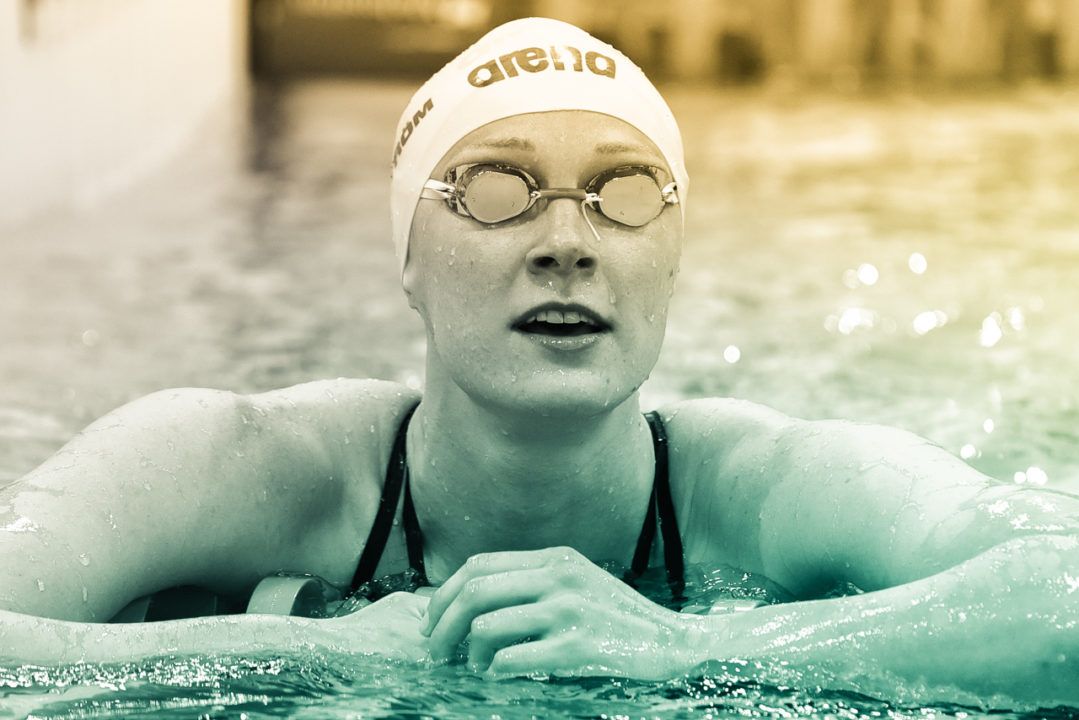 Sarah Sjöström has shimmied her way right up to world records in the 50 and 100 free this year, on top of already being a threat to her own 50 and 100 fly WRs. Archive photo via Peter Sukenik/www.petersukenik.com

With the start of pool swimming coming in just under a week in Budapest, take a look at some world records that will be put on notice at the 2017 World Championships. This isn’t a prediction for world records being broken– rather, it’s a guide to the records that are within striking distance for the top swimmer(s) in that event. Also, note that these are listed in no particular order.

Italians Gregorio Paltrinieri and Gabriele Detti will be battling for golds in the distance free events in Budapest. In the 1500 final in Rio, Paltrinieri was untouchable at 14:34.57, with Detti settling for bronze (14:40.86). It’ll be more than just gold, though, as Sun Yang’s record is just a few seconds away in the mile. Despite it being the longest pool race, three seconds is no easy feat to drop– still, Paltrinieri was 14:37.08 this April.

Meanwhile, Detti is looking stronger of the two in the 800 with his 7:41.64 from April. The 800 will be a harder record to bust; it’s a suited record from 2009, done by a swimmer who was barely heard from again, and at 2015 Worlds, even Sun Yang was over seven seconds behind when he won gold in Kazan. There’s intrigue here, however, as the men’s 800 is an Olympic event in Tokyo, and guys who have a sweet spot in this race rather than the 400 or the 1500 will be able to spend more time focusing on this intermediate distance.

Ryan Murphy was electric leading off the medley relay in Rio, blasting a 51.85 to break Aaron Peirsol’s world record last summer on a relay leadoff. He has not looked the same since Rio, whether that be from the post-Olympic hangover to finishing up school at Cal to transitioning to a pro athlete (or a combination of multiple factors), but he still earned his spot on this Worlds roster and will be a contender for gold in Budapest.

It might not be Murphy who is testing that record, though, but China’s Xu Jiayu. Xu nearly matched Murphy’s record in April, blasting a 51.86 to come within a single hundredth of Murphy’s mark. Besides Murphy, Xu, and Peirsol, no other man has ever broken 52 seconds in this race. In terms of proximity to the record, this is the closest any Budapest entrant has been to a world record this year other than Sarah Sjöström, who was .02 off of the 100 free WR last month.

The sprint records will be tested by the man who set them– GBR’s Adam Peaty. Peaty was very close to his 50 record in April at British Trials (26.48), and that’s the event that he’s more likely to break the WR in. He didn’t get to swim a 50 breast in Rio, as it isn’t an Olympic event, but he’ll get a chance to race it this summer in Budapest. His 100 has been great this year (57.79), but it’s looking more plausible to see him set a new WR in the 50 than in the 100.

Meanwhile, in the 200, we finally saw a WR and a sub-2:07 performance from Ippei Watanabe this January. Is it time for a men’s 200 breast WR at a major summer international champs? Did Watanabe’s swim open the floodgates for the flurry of 2:07-speed swimmers in this event to follow suit and drop under 2:07? It doesn’t have to be Watanabe– his teammate Yasuhiro Koseki has been on the cusp of breaking 2:07, and Kevin Cordes has been on fire this year.

Cate Campbell has left the conversation for the time being, setting her focus on 2018 for now. Her sister, Bronte Campbell, has been strong this year, but not WR-breaking strong. Sweden’s Sarah Sjöström has stepped in as the ultimate sprint weapon, putting all of her marbles in races 100 meters or less. She has been no more than a tenth away from the world records in the 50 and 100 free, and a pinch of salt (rest/recovery) might just put her in world record territory in both sprint free events.

It’s difficult to confidently call WRs for sprint events, as a slight hesitation at the start or an extra breath could be the difference between gold and off the podium, the difference between a world record and, well, not a world record. Sjöström has been faster than ever, though, and as a fast in-season swimmer, she might not have huge time to drop– and that’s okay. She only needs hundredths. It’s more likely we’d see a WR in the 100, as she has less to drop and the race is longer than the 50, but with the ferocity she’s been bringing to every race, those WR’s will be shaking in their boots in Budapest.

200 free: Katie Ledecky. Definitely the hardest of these four for her to crack, but she was less than eight tenths off in Rio, and nobody steps up to a challenge quite like her. If she doesn’t break the WR, it might be partly due to her having nobody to push her.

Fu Yuanhui of China was very close to breaking the 50 back WR in Kazan, going 27.11. She leads the world this year with a 27.36, about two tenths ahead of her teammate Wang Xueer (27.55), and it’s going to take a perfect race as its a 50 meter swim. We could also get a surprise swim from Brazil’s Etiene Medeiros, who was the silver medalist in this race in Kazan.

Meanwhile, Canada’s Kylie Masse has been on a tear this year, having turned in a 58.23 already which sits just .11 back from Gemma Spofforth’s suited record. She has the hot hand heading into Worlds, though Emily Seebohm and Kathleen Baker are dangerous a few tenths back.

King definitely has the advantage in the 50 over Efimova, as the Russian typically relies on otherworldly back-halves to finish first, making her better in the 100 and 200. The 100 is a toss-up, but Ruta Meilutyte’s WRs in both are definitely in danger.

Sjöström again, and this time it’s her specialty. She’s just now reaching WR territory in her freestyle, so it would be more expected for her to break WRs in the sprint free than in the sprint fly, where she’s been better and more focused for years. The 100 WR is more in reach– it’s possible that her 24.43 in the 50, on that sunny day in Borås, Sweden, was some sort of Scandinavian swim of utopian proportions. It was the right day, at the right time, so on and so forth.

Like most of these events, if anyone is going to break a WR, it’s one specific swimmer. For the IM’s, that swimmer is Katinka Hosszu. Hosszu has been good this spring, but not great. She hasn’t been throwing down incredible times left and right like we’re used to seeing her do. Perhaps that’s a good sign– maybe she’s been training so hard that her taper will be fantastic and she’ll blow her own best times out of the water. Or perhaps her years of exhausting Iron Lady meet schedules, where she samples every event on the menu, are catching up.

I think the women’s 100 free will be broken. Looking forward to seeing what Ledecky will do. Peaty is a beast.

I think Mack Horton could be a sleeper for the 400. Someone’s going to go under 3:40 someday, it’s just a matter of putting together the right swim.

I’d be surprised if the women’s 50 fly went. That record is out of this world.

SS can swim it easily, as she swam it.

You said, that you are Hungarian, aren’t you? You are kindly invited to forum.index.hu (úszás). We wait you there too. Riez is invited already.

Mixed free could actually been smashed if AUS had both C sisters + Chalmers to join Mcevoy.. but even if they were there, if it is not an olympic event, what´s the need?

I know it seems unlikely, but I do think Kalisz has an outside shot at the 400 IM record.

You must be joking.

Thorpe, Hackett, Yang could only managed around 7:38 and we are talking about the greatest mid and distance swimmers ever.

Not now, but Detti cen swim it sometimes.

blows my mind just thinking about it, considering the 1500 world record is a 14:31. With new technology and training styles every year it will eventually be broken, just not for a very very long time.

I could see quite a few WR’s in Budapest. That itching Olympic pressure is off and overall this season has produced very good times already.