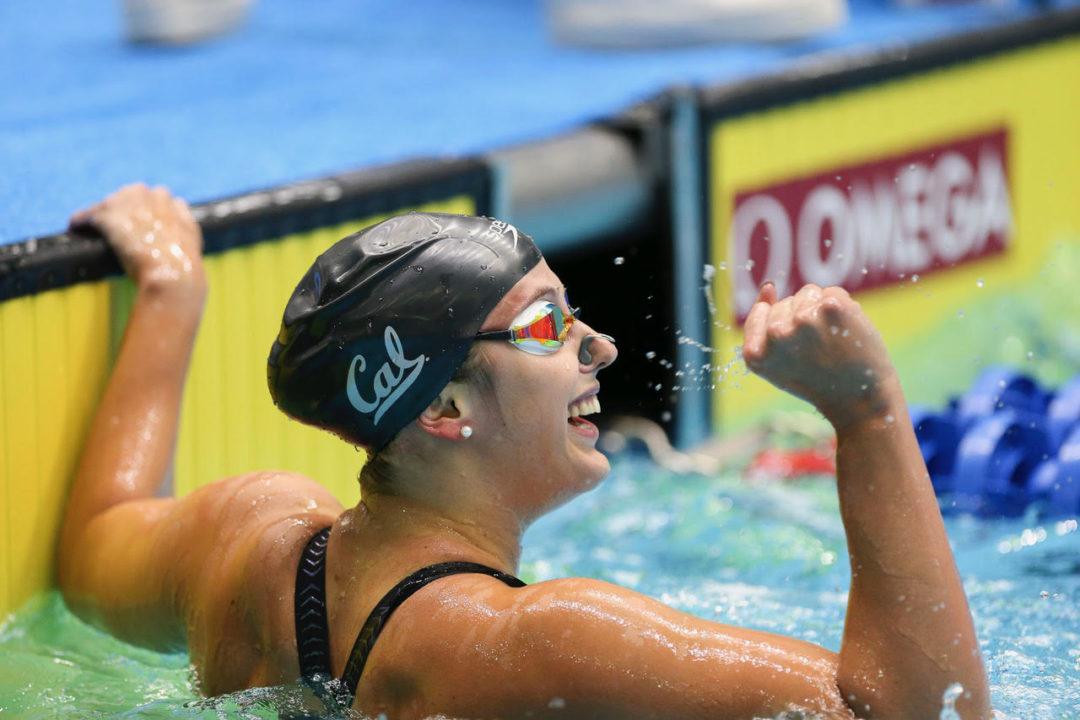 With three and a half of the five relay races now complete at women's NCAAs, relay lineups are becoming more clear for the teams who entered the meet with multiple options. Archive photo via Tim Binning/TheSwimPictures.com

With three and a half of the five relay races now complete at women’s NCAAs, relay lineups are becoming more clear for the teams who entered the meet with multiple options. This morning’s 200 medley relays featured mostly full-force lineups, but a couple key lineup slots could see major changes tonight.

The main team in question is Cal. Coach Teri McKeever is both blessed and cursed to have about 10 different viable relay lineups she could use throughout the meet, though at this point, her choices aren’t quite that wide-ranging. Expect Cal to make a couple of lineup changes tonight after qualifying 3rd in the 200 medley relay this morning.

It seems likely Farida Osman will take over for Valerie Hull on the freestyle leg. Hull was a key contributor on the national title-winning 200 free relay last year, but has been displaced by some of Cal’s young talent. She split 21.84 this morning, a solid anchor leg, but with Osman going 20.91 on the 200 free relay, that Golden Bear medley could be a full second faster.

The other probable change is subbing Kathleen Baker for Amy Bilquist on backstroke. Bilquist had the best leadoff split out of the A final qualifying teams this morning (23.95), but Baker very nearly rivaled that split opening up her 100 back on the 400 medley relay last night. (Baker was 24.18 to her feet at the 50). Baker had the second-fastest 100 back in history on that relay (though the team was DQ’d), so it makes sense to keep letting her show off her relay prowess.

Stanford is the other team with a deep enough roster to shuffle some relay legs around, but they went pretty much straight-up with their best swimmers this morning. Ally Howe, Kim Williams, Janet Hu and Simone Manuel should each reprise their legs. The only other option would be to try out a different breaststroker if Stanford thinks it can improve a relatively pedestrian 27.5 from Williams. But there’s really no one on the roster who seems likely to do it, outside of maybe Ella Eastin, who will be coming off of two 400 IMs on the day.

Williams was also able to drop a lot of time between prelims and finals on the 400 medley relay (59.67 split to a 58.51), so the spot probably remains hers.

How does a&m not get dqed with huge jump of -.86 reaction time – obvious from the stands

Mom – while I don’t know if she left early or not, nor can I speak to how obvious it was from the stands, I can tell you this: .86 seconds is somewhere between 5 and 6 feet. If a swimmer at the NCAA Championships leaves 5 or 6 feet early, it’s because they tripped and fell off the blocks. If they jumped by 5 or 6 feet, we’d have received at least 45 emails about it, along with a few dozen Tweets.

Probably wouldn’t generate as much traffic as Nathan Adrian’s suit malfunction, but sounds like it’d be a solid bump.

Did Williams really split :58.5? I thought most people were convinced that Howe had a very soft touch on the Back leadoff (which would explain her :51.4 – almost 2 seconds slower than Pac 12s), so Williams real split was more like a :59.3-5.

Interesting how slow Stanford swam but I would assume that they can rank top 3 tonight in that. I think I would call Cal for the win tonight though if whoever they put on breastroke can split decently, I’m assuming they will leave weitzeil breastroke instead of Garcia?

Smoliga had the best backstroke split of 23.88.