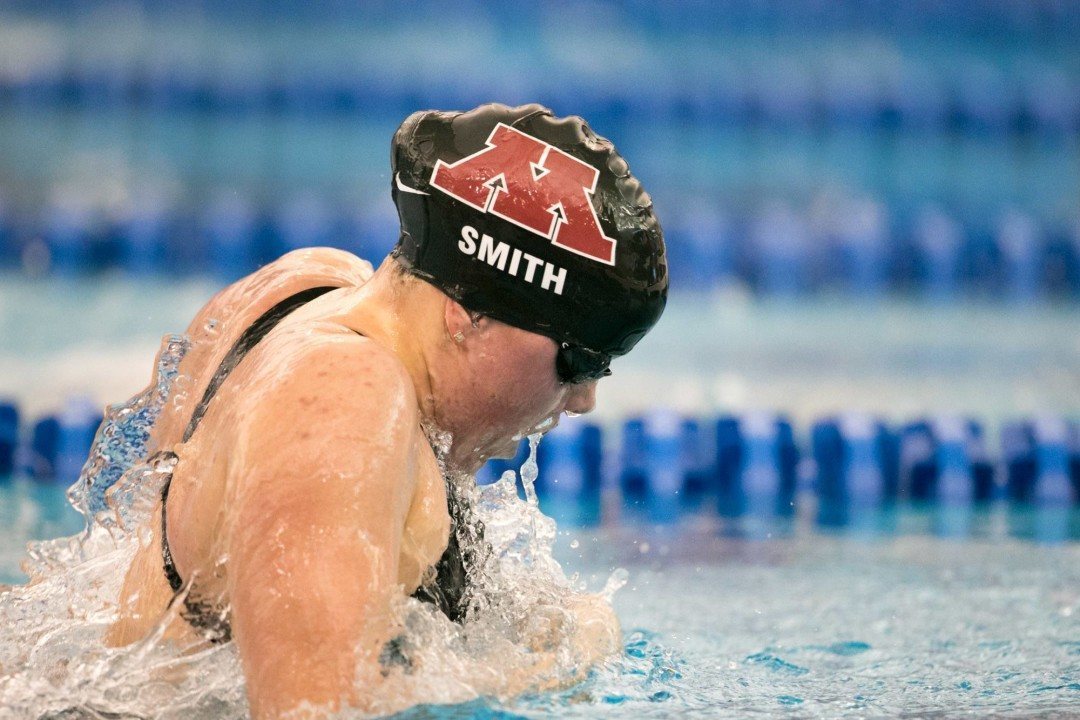 King is the heavy favorite at this point, but Minnesota's Kierra Smith, a Canadian Olympian, shouldn't be counted out. With her killer back-half speed, Smith could possibly pull off an upset. Archive photo via Tim Binning/TheSwimPictures.com

Indiana’s Lilly King turned heads last season when she smashed American Records en route to a sweep of the NCAA breaststroke titles. This season, King returns to defend those titles as an Olympic gold medalist in the 100 breast.

King is the only woman to have ever broken 2:04 in the 200 breast after dropping a 2:03.59 in last season’s final. She’s the heavy favorite at this point, but Minnesota’s Kierra Smith, a Canadian Olympian, shouldn’t be counted out. With her killer back-half speed, Smith could possibly pull off an upset. She was the 2015 NCAA champion in this race and enters with a personal best 2:04.37 from Big Tens.

The rest of the field is a couple of seconds behind King and Smith, but that should make the race for 3rd interesting. Returning All-Americans include UMBC’s Emily Escobedo, Texas A&M teammates Bethany Galat and Esther Gonzalez Medina, and USC’s Kirsten Vose and Riley Scott. Escobedo and Scott lead the way among the returners, as they’re tied for 3rd seed with a pair of 2:06.20s.

Also bunched into the 2:06-range are ASU freshman Silja Kansakoski, Texas A&M’s Sydney Pickrem, Louisville’s Andee Cottrell, and Virginia’s Laura Simon. As a freshman, Kansakoski shattered the ASU school record at Pac-12s to enter NCAAs with a 5th-seeded 2:06.41. Just a couple tenths back is Pickrem, who looks for redemption in this event after finishing just 27th last season.

Others to keep an eye on include Texas’ Madisyn Cox, NC State’s Kayla Brumbaum, and Texas A&M’s Ashley McGregor. All 3 are entered with times in the 2:07-range and are likely to challenge for a top 8 spot.