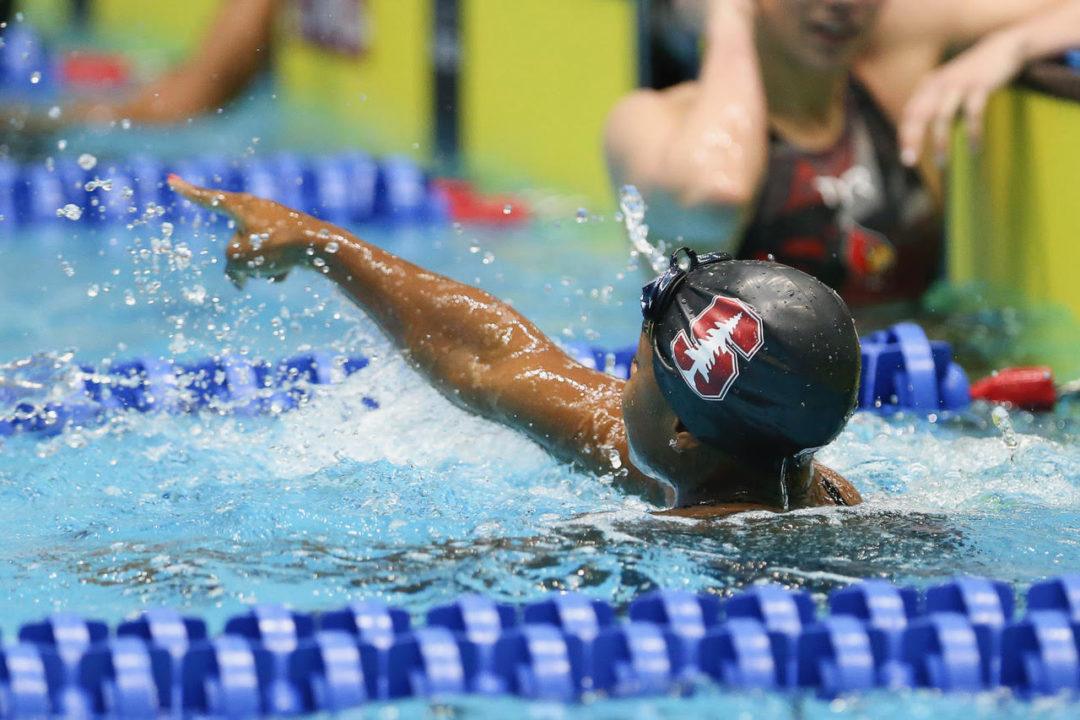 Defending champ Simone Manuel will look to go 3-for-3 in the 100 free at her final NCAA Championships. Archive photo via Tim Binning/TheSwimPictures.com

Stanford senior Simone Manuel has been the best female 100 freestyler in the world over the past two years. Though that statement could be disputed, with both Campbell sisters faster than her in 2016 and Sarah Sjostrom quicker in 2017 (long course), it’s impossible to deny she’s the best when the pressure is on.

After crushing the American Record to win the NCAA title in her freshman year, the 21-year-old took a redshirt year to go win Olympic gold in the event, and followed up with another NCAA title and a World Championship title in 2017, both in American Record fashion. This season Manuel will go for the trifecta, a third national title, to close out her college career. Though she technically would still have another year of eligibility if she wanted, her coach Greg Meehan confirmed in February this would be her last college season.

The Texas native sits atop the college rankings with a season-best of 46.43 from the Pac-12 Championships, right in line with where she’s been leading into NCAAs her other two seasons. Last year, before unloading the fastest swim ever in 45.56, she was 46.36 at Pac-12s. An early season injury doesn’t appear to have held her back at all, and a third title in both this and the 50 free seems almost inevitable.

In Manuel’s two NCAA title swims she won the race by an average of about nine tenths, a massive margin in a 45-46 second race. However, this year, chances are the gap won’t be so big.

Though four of the next five highest finishers last year have all graduated, two women still pose a threat in this race: Abbey Weitzeil of Cal and Mallory Comerford of Louisville.

Weitzeil, who, like Manuel, took a redshirt year for the Olympics, had a relatively rough transition to college swimming in her freshman season.

After being as fast as 46.29 in high school (which was the American Record until Manuel broke it in her freshman year), her fastest last year was 47.22 (in December) and managed just a 47.79 to take 8th in the NCAA final.

Her sophomore year has been a different story, going 46.95 in December at the Georgia Invite and then 46.63 at Pac-12s. Those times are trending in the right direction heading into NCAAs, as the 21-year-old sophomore looks to get under her high school bests. Despite being just two tenths off Manuel at Pac-12s, she’ll need a monster swim to challenge the defending champ.

Comerford, a junior with the Louisville Cardinals, has been on an upward trajectory since moving to Kentucky. After finishing a close 2nd in the 200 in her freshman year, the 20-year-old shocked everyone tying Katie Ledecky for the crown in 2017, and added a 3rd place finish in the 100 after opting to scratch the event the year prior.

She took her best time down a full two seconds in one season, from 48.3 to 46.3, and after proving to be one of the world’s best in the LC version of the event (placing 4th at Worlds), there’s no reason she shouldn’t be even faster this year and flirt with the 46-second barrier. She was 46.65 at the ACC Champs, one tenth better than a year ago.

Behind the perennial top three there is an abundance of women who will be fighting it out in the prelims for a berth in the championship final. There are seven who have been between 47.1 and 47.5 this season, with an additional six under 48 seconds.

Tennessee sophomore Erika Brown has had the biggest rise of anyone in the NCAA this season, going from being a relay-only swimmer in 2017 to coming in as the favorite to win an event (100 fly). Her sprint freestyles have also been sensational, and she comes in ranked 5th in the country at 47.17 in the 100 after coming into the year with a best of 48.46.

North Carolina’s Caroline Baldwin knocked a big chunk off her best early in the year in 47.14, and with an NCAA spot locked up likely didn’t taper much for ACCs where she was 47.44. The senior had her fastest swims last season at NCAAs, and if that holds true this year, she’s in the hunt for a top-4 spot.

Like Brown and Baldwin, seven of the next eight seeds have all swam their personal best times this year. Siobhan Haughey (47.20) of Michigan, Annie Ochitwa (47.58) of Missouri and Julie Meynen (47.61) of Auburn all did their PBs early in the year at the Invite meets in November/December, while Alyssa Tetzloff (47.39, Auburn), Liz Li (47.43, Ohio State), Claire Adams (47.46, Texas) and Veronica Burchill (47.66, Georgia) all did theirs recently at their respective Conference Championships. It will come down to who can peak at the right time.

The one swimmer seeded in the 6-13 range who hasn’t gone a best this season is Texas senior Rebecca Millard, who was less than a tenth off her NCAA best from last year (47.56) at Big Ten’s in 47.65. She was able to drop nearly four tenths from Big 12s to NCAAs last year, and if she does it again she could sneak into the A-final.

Along with Adams, both Amy Bilquist of Cal and Gabby DeLoof of Michigan will swim this event for the first time at NCAAs after usually doing the 200 back. Bilquist comes in with a season best of 47.79 after leading off the NCAA relay last year in 47.55, while DeLoof has gotten all the way down to 47.86 this season after coming into the year with an all-time best of 49.58. Both are outside shots at the A-final, but should be good bets to make it into the consols.

Adams and her teammate Rebecca Millard (12th seed @47.65, 11th at NCAAs last year) are both swimming only 2 individual events at the meet. Both are capable of getting into the final, and the Texas women had a very good taper at NCAAs last year, but for now, we only see room for one of the two in the final.

One big wildcard is Ohio State’s Liz Li. While she’s swum some very good 50s at the NCAA Championships, she’s struggled to hit best times in the 100 (last year at NCAAs, she was seeded at 47.50, but missed any final in 48.20). After skipping competition for the fall semester, she came back with a 47.43 at Big Tens – faster than she was last year, and a time worthy of an A-Final. But, she still has to prove that she can hit this 100 at NCAAs.

Darkhorse: Texas A&M senior Béryl Gastaldello was absent at the SEC Championships due to illness, but was back in action over the weekend and will be a factor if she’s at 100%. She was an A-finalist last year (47.34), and comes in with a season best time of 47.77.

The Hy-Tek results have the wrong dates. I’m sure they’ll get it updated before the meet begins.

Question: is Claire Adams doing the 100fr instead of the 200bk? Is she doing both?

Sorry to ask. I’d check the psych sheet, but my computer is being stubborn and refusing to load it.

Regarding 200 free competition: more intriguing than the question “Manuel vs Comerford” is the question if Katie Ledecky leads 4×200 relay. That is the first her event on the first day of the meet, clear water all the way, no pressure.
Should I was Ledecky I would do it only if I felt like American record. Otherwise it can only get her in the trouble no matter if she would be faster or slower the winner of individual 200 race.

No shade to Ledecky’s undeniable greatness but I keep saying she doesn’t have the front half speed to go for Missy’s yards AR. Missy split near Katie’s 100 free PB.

Katie Ledecky’s personal best at 100scy is 48.28. That is well behind Franklin’s first 100 in her 200 record race. Franklin’s first 100 was only half a second slower her second ever time in 100 individual race. And with that done her second half in 200 race was also one of the fastest in the history of this race. I was surprised of how little was discussed about this exceptionally unique performance.
I agree with you that it isn’t obvious where Ledecky can find this 1.2 sec of improvement to get even with Franklin’s record. It is not even clear what is less challenging 1:52.98LCM of Pellegrini or 1:39.1SCY of Franklin.

And then announces she is dating Dean Farris…

Despite there was a noticeable difference in results of Manuel and Comerford in 200free race last year and Comerford proved later that such a performance wasn’t just lucky circumstances, I think that Simone Manuel prefers to race Mallory Comerford than Katie Ledecky. She has more tactical options competing against Mallory and what is more important she mentally absolutely isn’t intimidated by Comerford. Remember how she was frustrated standing two steps bellow Comerford on podium. Revenge is coming. Of course if Mallory Comerford is capable now (who knows) of threatening Franklin’s record there is no more talks but if they both are still 1:40 swimmers then Simone will win . No doubts.
As much it is nice to see Manuel… Read more »

Manuel should take it but interested to see what Comerford goes. Weitzel after them in my book.

Very weird to consistently rank Brown over Baldwin when Baldwin’s been faster in the event and won head-to-head.

Has Simone lost a 100 free since Trials?

Manuel looked peeved after Comerford beat her. Maybe she thinks of the 100 free as her Baby.

No she didnt, thats just how she looks like…she has RBF…lots of ppl have it

I think the 200 is her more interesting event. She’s often leading going into the final lap. Can she put together a final 25 to take the NCAA title? She just has to adjust her pace a little bit to have enough at the end.