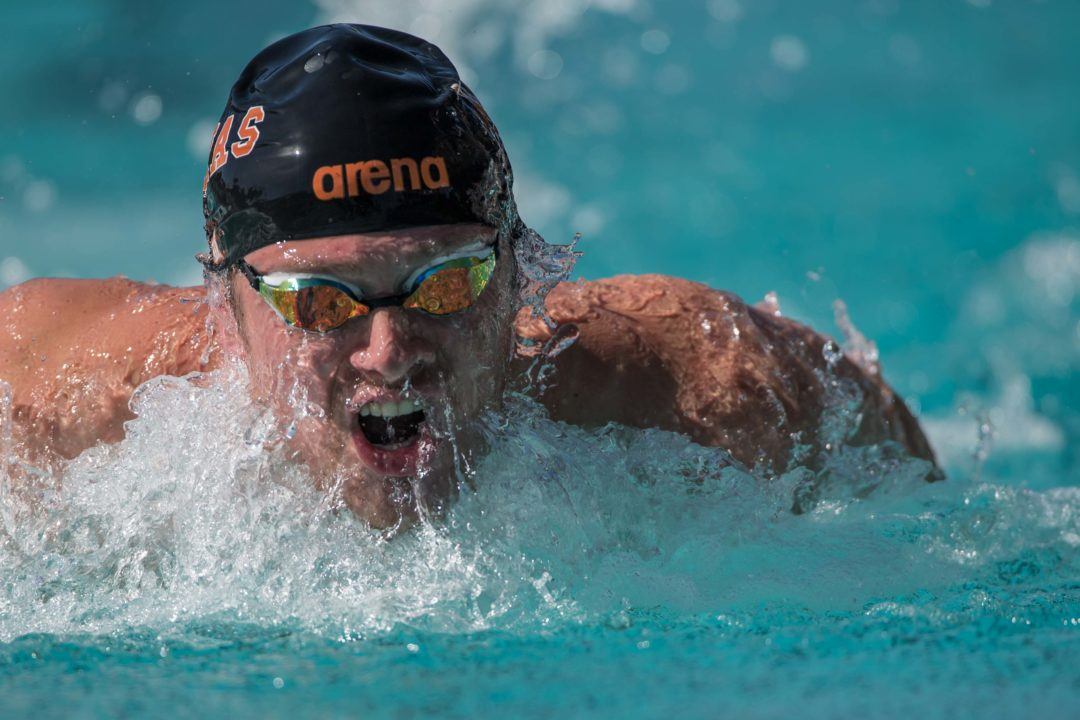 The men's 200 fly shapes up to be a three-man race at the front for two World Championship spots. Archive photo via Mike Lewis/Ola Vista Photography

After Michael Phelps‘ epic return to Olympic glory last summer in the men’s 200 fly, the post-Phelps era is set to begin (again).

Tom Shields had his long course breakout swim in this event at the 2014 Nationals, winning in 1:55.09, and even went on to beat Phelps head-to-head in the 100 at the same meet. He was a finalist in the event at the 2015 World Championships, and took the 2nd Olympic spot behind Phelps last summer.

Shields was doubted by many to make the team in this event last summer, but got the job done and won’t be doubted this time around. Not known for his in-season swims, especially in the 200 fly,

Shields has been very consistent this year with four long course meets under his belt and four showings between 1:58.0 and 1:59.0.

With his front-end speed he’ll likely be the early leader, but the true test for Shields will come on the last 50. In the Olympic Trials final he brought it home in 32.0, something he probably can’t afford to do this time around. I think he’s in line to finally crack the 1:55 barrier in Indianapolis, especially with this event on the opening day of competition.

The man picked by many to take that second spot behind Phelps last summer was Jack Conger, who looks to be primed for an international breakout this year.

After the NCAA Championships, where Conger finished off his collegiate career, he stated he wanted to be racing a lot of events in Budapest. The 200 fly will be first on his list. He dropped a big swim at the 2015 Nationals in 1:54.54, which created many expectations last summer. A day after a very impressive 1:45.7 200 free, he wasn’t quite on point going 1:56.4 to take 3rd.

Now with the 200 fly on day 1 that’s no longer a problem, and coming off an NCAA & American Record performance in the event at the NCAAs, he’ll be raring to go and could easily hit a best time.

If there’s one guy who could upset Shields or Conger for a spot, it’s Chase Kalisz. Kalisz has long been revered in the 400 IM, but has really turned up the heat in his other events this year, especially the 200 fly. Entering the year with a best of 1:56.48 from the Olympic Trials, he’s already been under 1:56 twice this season, including a PB of 1:55.82 at the Mesa Pro Swim. Not only is he the fastest American this year by nearly a second, his time from Mesa is faster than everyone else in the field was at any point last year, except for Shields who was 0.01 faster in Omaha.

All three men look to be somewhere in the 1:54-range, and it’s going to be a very exciting race for those two spots. The only real issue for Kalisz is that the 200 fly fits his schedule well for U.S. Nationals, but would force him to swim a double with the 200 IM at Worlds. Still, Kalisz is a tough enough swimmer that it’s not out of the question for him to at least give that event lineup a shot in Budapest, if he qualifies in both events.

Kalisz’s Georgia Bulldog teammates Gunnar Bentz and Pace Clark will be major factors in this event as well, after strong showings at Olympic Trials placing 4th and 6th.

At the Santa Clara Pro Swim earlier this month Bentz discussed how he has trouble producing fast in-season swims like his teammates Kalisz and Jay Litherland, but once he gets his taper he’s good to go. After busting out a 1:56.4 for 4th in Omaha, Bentz threw down a massive best in the 200 fly at NCAAs to take 3rd in 1:40.07. He’s only ranked 10th in the U.S. this year, but look for him to be right there in the mix. Watch for him particularly on the back half, as he had the fastest second 100 in the field at both the Olympic Trials and the NCAA Championships.

Clark is actually ranked 2nd among Americans this year at 1:56.75, less than a half a second off his best time from the Olympic Trials. He’s been 1:56 three straight years now, but this is the first time he’s done it in-season. In fact, his fastest in-season swim prior to this year was 1:59.09, so look for a dip into the 1:55s from him.

Another one to keep an eye on is Louisville sophomore Zach Harting. After famously dressing up as Batman in the walkout at Olympic Trials, he backed it up with some fast swims including a pair of sub-1:57s to ultimately place 7th. He’s currently not a threat for a spot on the Worlds team, but could add some spice to an already loaded final.

Three others with a shot to make the final are Trials semi-finalists Mick Litherland and Justin Wright, along with 2015 World Junior bronze medalist Mike Thomas. Wright just missed the final last year in 9th at 1:57.24, and Litherland has looked strong this season, tied for 7th in the country at 1:59.08.

And then there’s Andrew Seliskar, who was a finalist in Omaha but hasn’t been seen in competition since the NCAA Championships. He was strong in the event last summer through 150m, but couldn’t quite put together the last 50, bringing home both the semis and finals in 32-plus. If he’s competing in Indy he’ll be a factor to final, but to have a shot at the team he would need to get back to his 2015 sub-1:56 form.

Darkhorse: Recent Stanford commit Jack LeVant from the North Texas Nadadores broke 2:00 for the first time at the Arena Pro Series in Austin, and if he hits his taper he could find himself in the A-final.

Harting 1:50 WR. Batman has cloaking tech that can be applied to fins and paddles. and suits

I think people are Shields a lot of unfair criticisms for his 200 fly. When he first broke out and won the event at nationals he commented that whether he goes out conservatively or fast he always dies off on the last 50. Knowing that he has made the strategic choice to go out on the fast side and at that meet, it worked out. He was out almost 2 seconds faster at the 150 in finals and his last 50 was essentially the same, and he dropped from a 1:57 to a 1:55.0. Also, there’s a lot of disrespect towards someone who has qualified in both the 100 and 200 fly at all major meets since 2014. The dude… Read more »

I hope Tom Shields has a great nationals, but does not make the 200 fly for Budapest. Should focus on the 100 fly, not swim three rounds of the 200 fly (at best) on a second taper. It didn’t work in Rio.

And I don’t know of Shields got the job done so much as Conger choked.

USA desperately needs a new big talent in the men’s 200 fly. Like for women. I don’t see a US medal in that event, men and women, at next worlds.
Maybe Sam Pomajevich is the answer for 2020 and 2024. I think he has a big potential and he goes to Texas. Too early for 2017.
For this year Conger vs Kalisz vs Shields on paper. Bentz could surprise too. But I’ve been so much disappointed by him for several years…. 🙂 Pace Clark should be in the conversation too.

The key for the field is NOT to swim next to Shields. Don’t forget at trials last year, Phelps swimming next to Shields in the finals and coming of the wall at the 150 that Shields piano clipped the goat as well. He almost didn’t make it into the wall….

I am very excited for the trials. Does anyone know when the entry lists come out?