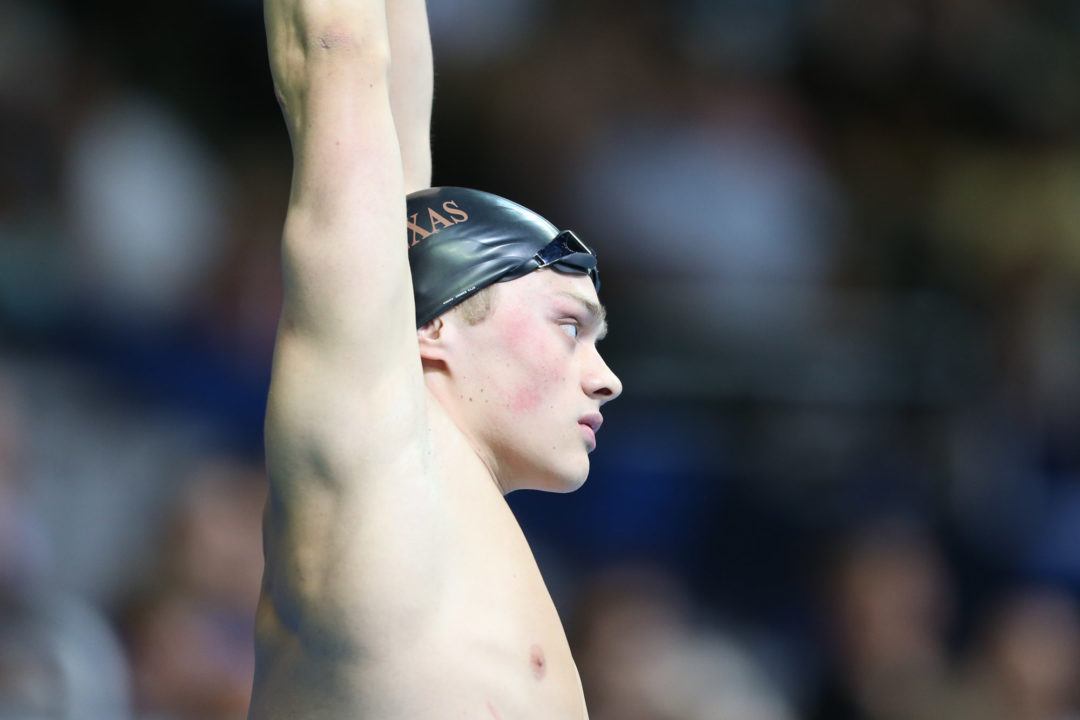 Teammates Ryan Murphy and Jacob Pebley are the frontrunners in the 200 back, but Texas' John Shebat could come out of nowhere after his explosive NCAA season. Archive photo via Tim Binning/TheSwimPictures.com

The 200 back will bring both 2016 Olympians back to compete for a spot on the World Championships roster: Cal teammates Ryan Murphy and Jacob Pebley. In Rio, Murphy swam his way to Olympic gold, while Pebley earned a spot alongside him in the Olympic final. This season, Pebley has been battling closely with Murphy, and he owns a slighlty faster season best than the Olympic champ. In Indianapolis, we could see a close race between the two Golden Bears as they’re the frontrunners for the spots in Budapest.

Texas teammates John Shebat and Jonathan Roberts could also give their team 2 swimmers in the top 8. Roberts has been under 1:59 before, boasting a lifetime best 1:58.74 which he swam in 2014 before tying it in 2016. Shebat’s best time is a 2:03.94 from 2015 Nationals, but after an explosive NCAA season where he dropped nearly 3 seconds, he seems due for a big drop. He didn’t swim the event in 2016, so we can be pretty sure he hasn’t shown all of his cards in this race yet. Shebat is also the 3rd fastest performer in history in the yards version of the event.

Another man who could break up the Cal 1-2 is National Teamer Sean Lehane, who is the only other man to enter with a best time under 1:56. Lehane dropped a personal best 1:55.56 at Speedo Sectionals last summer, and went on to place 4th at Olympic Trials. Lehane was the 2015 Pan American Games champion, leading a 1-2 charge with fellow National Teamer Carter Griffin. Though he was slightly off his best last summer, Griffin placed 9th at 2016 Trials and is a strong contender for a finals spot this summer.

Both Michael Taylor and Robert Owen made big strides last summer to land in the 1:56-range. Taylor, a Florida commit, has this season as his last chance to chase Aaron Piersol’s 17-18 National Age Group Record of 1:55.15. He placed 7th at Olympic trials, just one place behind Owen, who went on to take 2nd at the2016 U.S. Open.

Additional returning Trials finalists include Austin Katz and Hennessey Stuart. Like Taylor, Katz is an age group standout, as he took 5th at Olympic Trials and brought his time down to a 1:57-low. Stuart finished 8th inthe Olympic Trials final, and boasts a personal best 1:58-low.

Stuart’s teammate Justin Ress turned heads with a very fast 100 back at Charlotte UltraSwim. He hasn’t swum the 200 back this season yet, but we could see him make a big drop there as well. His currrent best time is a 1:59.04 from 2016 Trials, where he placed 11th in semis.

DARKHORSE: Carmel Swim Club’s Drew Kibler has already destroyed his best time this season. He came into 2017 with a best time of 2:10.49, but slashed 10 seconds off of it to lower his best to a 2:00.22 in March. If he hits his taper, we could see him swim under 2:00 and make it into the final.

No arkady vyatchanin? I thought he was a citize

what about that young dude from Harvard – what’s his name? Didn’t he have a big drop in 200 yd back?

I think if anyone is beating either pebley or murphy it’s Patrick mulcare.

If Pebley gets off that lane line he could challenge Murphy….. plot twist: is he pulling on the rope?

I think Clark Beach will make the final. He went 1:59 last summer and dropped 3 full seconds this short course season in 200 yard back.

I love Shebat but I believe he’s more suited for the 100 long course. 1:55 seems like a stretch this summer. I’d love to be wrong though.

After the NCAA meet he put together (and he proved last summer he’s not just a short course guy), I wouldn’t put it past him.

No mention of Mulcare who has a 1:57.34 pb and dropped time in that event in yards