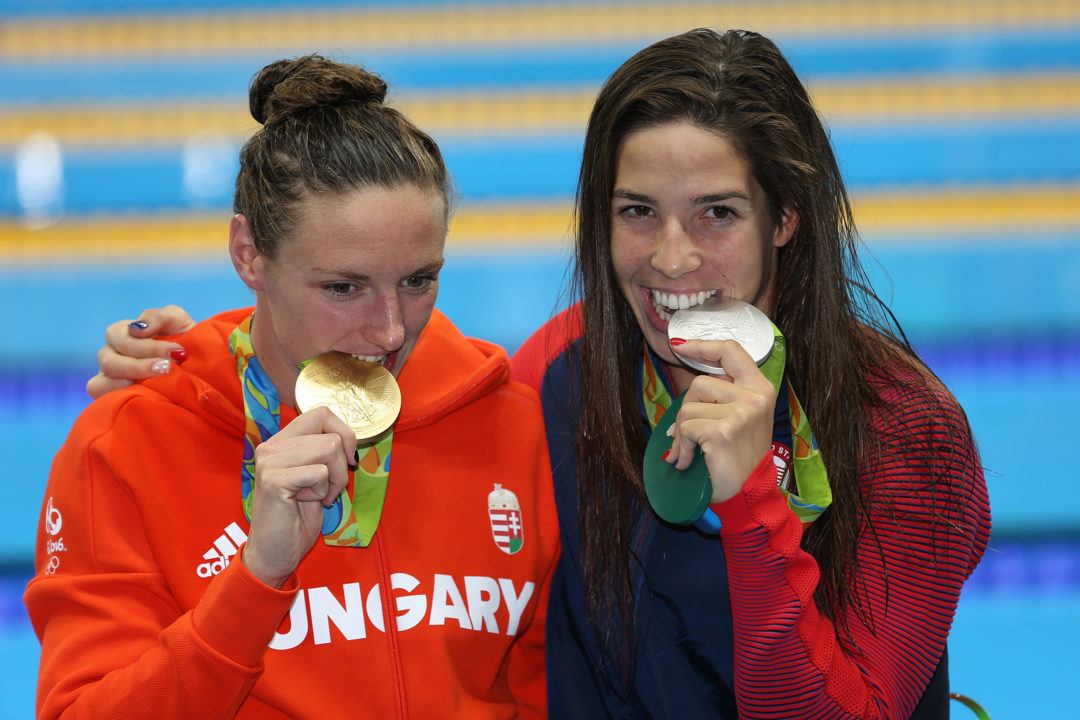 The first finals session of the 2016 Rio Olympic Games takes place tonight and with it brings potential for several world records and countless national records as athletes attempt to solidify their names in Olympic history.

Chase Kalisz will look to hold off both Daiya Seto and Kosuke Hagino of Japan in order to take home his first Olympic gold in an event that has been won by an American male at every Olympics since 1996. Kalisz’s teammate Jay Litherland will be looking to get past one of the Japanese in order to claim an individual medal.

Sarah Sjostrom, Dana Vollmer, and Penny Oleksiak were all out fast this morning in the heats of the 100m butterfly. Look to see if they’ll continue to drop time heading into the final, and if Oleksiak at just 16 can re-break her junior world record en route to her fist individual Olympic final.

American Conor Dwyer led the way in the heats of the 400m freestyle this morning. He’s going to try to hold on for gold with Australian Mack Horton and defending Olympic champion Sun Yang nipping at his heels.

In the women’s 400m IM Katinka Hosszu will be looking for the first Olympic medal of her career and the world record. This morning she was just 15 one-hundredths shy of Ye Shiwen’s record from the London Games and will likely be eyeing that tonight.

Adam Peaty was in a league of his own this morning, breaking his world record in the 100m breaststroke with a 57.55. Almost a full-second faster than anyone else in history, the storyline of this event is how fast can Peaty go?

The women’s 4x100m freestyle relay will bring the heat tonight. The Australians are favored heavily, and there’s plenty of competition for the remaining two medals. The Americans, Canadians, and Italians are all in the mix

Kosuke Hagino was fresh as can be in the final tonight, moving way out in front with his countryman Daiya Seto at the halfway point in the race.

Hagino continued to lead on the breaststroke, where American Chase Kalisz began to close the gap. At the 300-meter wall, Kalisz passed Seto and began to put the pressure on Hagino.

Kalisz managed to swim up to Hagino’s hip, but couldn’t get any farther than that as Hagino held him off in order to win his first Olympic gold medal, and his second Olympic medal in this event. Hagino was second in 4:06.05, Kalisz was second in 4:06.75.

Seto faded to third overall in 4:09.71, slower than the time he swam in the heats this morning. Max Litchfield closed the gap on him slightly, finishing fourth for Britain.

The United States has won 8/13 Olympic 400m IMs now. This is only the second and third medal for Japan in this event ever, adding to Haginos’ bronze from 2012.

If anyone needed anymore reason to predict Olympic gold for world record holder Sarah Sjostrom she gave it to them tonight. With a win in her semifinal, Sjostrom broke the previous Olympic record held by Dana Vollmer at 55.98.

Sjostrom was a 55.84 in semifinal two, further establishing herself as unbeatable. Second to her, almost a full second behind, was Emma McKeon of Australia in 56.81. McKeon managed to defeat Canada’s Penny Oleksiak who was a 57.10 to finish fifhgt overall.

Rikako Ikee of Japan broke her own national record that she set this morning in the event en route to a 57.05 performance. Ikee came very close to cracking the 57-second mark, something four swimmers managed to do this morning.

Denmark’s Jeanette Ottesen was right behind Ikee in the first semifinal with a time of 57.06 to take the third seed overall.

Dana Vollmer, Lu Ying, and Chen Xinyi made up the remaining finalists. American Kelsi Worrell was ninth and just missed out on her first Olympic final.

Things between Australian Mack Horton and rival swimmer Sun Yang have been heating up over the last few days in anticipation of this final.

Horton called Yang out for his previous doping violation, and backed up his talk with a gold medal performance in the 400, dethroning Yang who was the defending Olympic champion.

James Guy of Britain took things out fast, leading the way at the  halfway point under world record pace. Quickly, he fell off that pace and both Yang, Horton, and America’s Conor Dwyer emerged in front.

At the 350-meter wall, Yang took the lead ahead of Horton and Dwyer. With 50-meters to go, Horton wouldn’t lose. He passed Yang, held on for the touch, and grabbed his first individual gold medal with a 3:41.55 performance.

Yang lost it all at the touch, with a 3:41.68. The two were icy to each other following the swim, not even acknowledging the race with anything but a tough stare.

Gabriele Detti of Italy picked up the bronze in 3:43.49, making him the first male Italian medallist in swimming since the 2000 Olympic Games.

Hosszu was under world record pace the entire race, turning at the 300-meter mark over five-seconds under that pace. She won by almost five-seconds, churning well ahead of the rest of the field for the entirety of the race.

While Hosszu was the dominant force for gold, Maya DiRado from the United States was the most dominant force for silver, taking things out second for the majority of the race. DiRado ultimately did finish second with a 4:31.15 performance.

That time for DiRado took down Mereia Belmonte Garcia’s 4:32.39. Belmonte Garcia closed on her a little on the last 100, but didn’t have enough in the tank to pass her. She settled for third overall.

Britain’s Hannah Miley was left of the podium, touching fourth by just fifteen one-hundredths of a second in the 4:32.54. Miley turned third at the 300-meter wall but wasn’t able to hold off a charging Belmonte Garcia.

Adam Peaty of Great Britain let forth another monster swim, putting up a 57.62 swim in order to qualify first heading into the final almost a full second and a half ahead of second place qualifier Cody Miller of the United States.

Peaty’s time was just seven one-hundredths slower than the world record of 57.55 that he swam this morning in the heats. It’s the second fastest performance in the history of the sport. Peaty now owns the top three times ever.

Miller was second in 59.05 with Cameron van der Burgh just behind him in the second heat. Miller was a 59.05, a strong time when not compared to Peaty’s. Van der Burgh was third overall in 59.21

Yasuhuro Koseki and Kevin Cordes both made the final in the fourth and fifth spots respectively.

As expected, the Australians managed to win the women’s 4x100m freestyle relay. The standout team managed to also break their own world record with a time of 3:30.65.

The Americans led for the first 200-meters, until the Campbell sisters dove in for the Aussies and took the lead from the Yanks and held it until the end of the race. It was clear the Americans were a safe bet for second, but things heated up in a battle for third.

Young-gun Penny Oleksiak held off the Dutch sprinters in order to secure the bronze for Canada, ending a long medal drought for the Canadians in women’s swimming.

Both the Americans and the Canadians broke their national records.

The Dutch were fourth.

As an honest Chinese, I am really upset about this Sun Yang, a controversial figure in this country, who was involved in lots of scandals but hailed by many as the national hero, just like the notorious Liu Xiang, the gold medal athlete in men’s 110meter hurdles. They’re all bad guys, and they never represent the China I live in.

Get a load of Mack’s insta, pretty bitter messages from half of China.

That’s just sad. The guys WAS suspended for using a banned substance, and continued to work with a coach who was banned for involvement with drugs. Horton called it as it was – if he chose to ignore him, it’s his right. And if he wishes to call him out on his past suspension, then he’s doing more than the officials have done.

5
-2
Reply
OhioSwimmer
Reply to  Not in the Know

It’s terrible. The people just seem to be jumping on the bandwagon and slandering him. Also look at the hashtags #apologizetosunyang and #mackhorton

Well in this age of social media where an athlete puts himself or herself in a more public forum, you have to be prepared for a backlash if you want to dish it to other athletes, whether justified or not. My opinion.

Just re-watched both 100br semi-finals and Peaty’s ‘bad’ start makes sense now – He’s one of very few who actually abides to the 1 dolphin kick rule off the start.

Wish the rules would actually be implemented – Total joke.

Great swim for Canada. One second behind US, a country with 10x the population. Then gold for AUS a country that US is 14x larger than. Would like to see some more recognition from NBC for excellence by non US swimmers

You aren’t going to get it. NBC is notorious for being over-the-top pro-American while ignoring the accomplishments and victories of other nations. Rather than endure NBC, I watched the live stream feed and enjoyed listening to the Aussies speak intelligently without hint of favoritism.

The commentators have to appeal to the lowest common denominator because there are a lot of first time swimming viewers watching. If NBC didn’t focus on the Americans, the first time swim fans would probably be confused or worried that the Americans 1) didn’t win because in America we are told we are the hest in everything, no exceptions 2) were upset by the Australians and didn’t preform to their expectations

Where is the live stream?

Surprise, the American network shows preference to American athletes mainly for American viewers. I agree that the Aussie broadcasters are more impartial, but I do remember one of them saying they hoped Horton would win the 400. (Granted many of us did rather than Yang)

sorry, respectfully disagree, I don’t think the Aussie commentators were unbiased, especially when Horton was racing.

Pellegrini’s anchor split was 53.89. I expected her to be faster.

Is there anywhere else I can find splits other than the Rio website? It is the most confusing results page ever

Yes. Talking of doping, the people who designed the Rio website must be on drugs.

Does anyone the individual split of Aussie team and usa team in 4 x 100 free relay? I know C1 was going to pull away from Ledecky at the last leg but Ledecky fought hard though at last 25… Well anyway Congras to Aussie team and Well done for the US team!