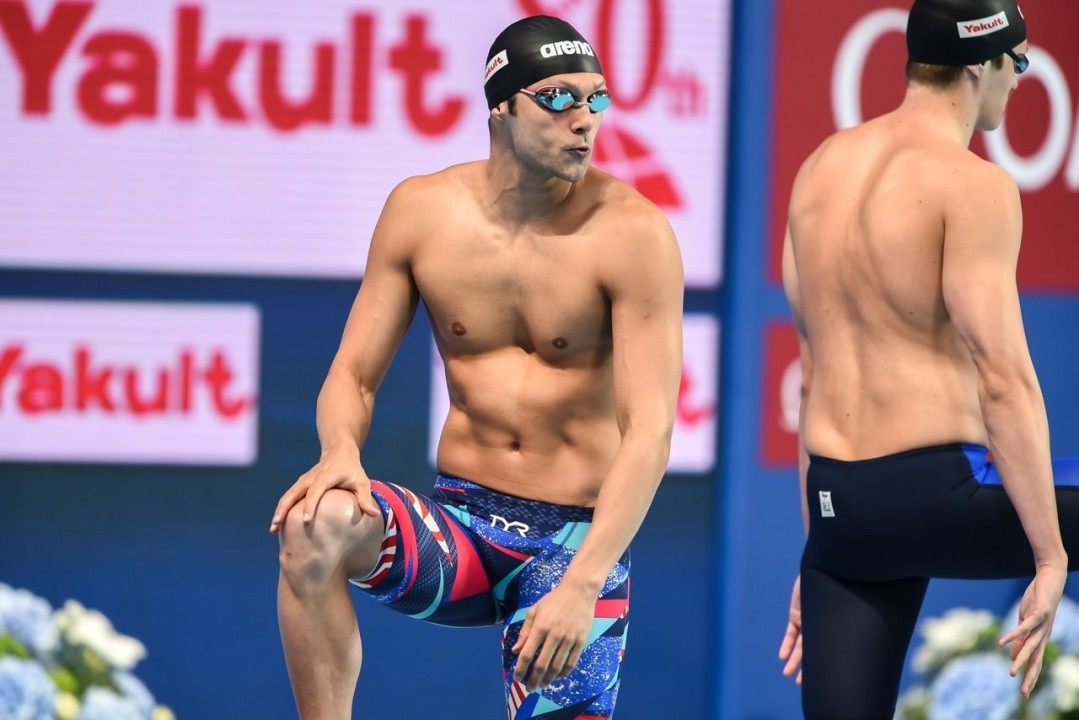 Look here for a report of the scratches before the final preliminary session of the Arena Pro Swim Series - Charlotte. Cody Miller (above) is sitting out the 200 IM in favor of the 50 breast. Current photo via Peter Sukenik/www.petersukenik.com

Most of the big scratches to report this morning are from swimmers who opted not to swim the meet (including Elizabeth Beisel, Kathleen Baker, Laura Sogar, and Grigory Tarasevich), although yesterday’s 200 breast champion Cody Miller is sitting out the 200 IM in favor of the 50 breast.

Women’s 200 IM- The number two and three seeds are out of the women’s 200 IM as SwimMAC’s Kathleen Baker and Bluefish’s Elizabeth Beisel both scratched the event. Beisel is in Atlanta for the weekend. Number eight seed Tanja Kylliainen of Cardinal is out as well, as is Long Island Aquatics’ 17-year-old Margaret Aroesty. Beisel’s Bluefish teammate Laura Sogar has been out for the entire meet, so she won’t swim this event either. 14th seed Marni Oldershaw of Michigan is also out. 17-year-old Carly Cummings of Badger is out as well.

Men’s 200 IM- The UBC Dolphins’ number nine seed Luke Reilly has scratched the men’s 200 IM. Badger’s Cody Miller is out as well to focus on the 50 breast this morning, after winning the 200 breaststroke yesterday. Ohio State’s Chris Depietro also scratched the event from the 22nd seed. Lousville’s Nolan Tesone scratched, as well as Mohamed Elsayed, who is focusing on the 100 free instead.

Women’s 200 Back- As mentioned, Elizabeth Beisel signed up for for the Atlanta Classic and the Charlotte Pro Swim this weekend, choosing the Atlanta Classic, so the second seed is out. Ohio State’s 18 seed Zulal Zeren is out as well, along with South Florida’s number 25 Carolina Colorado.

Men’s 200 Back- Grigory Tarasevich scratched out of all his events this weekend, including the 200 back. Nolan Tesone of Louisville and Augustus Whiteman of Ohio State are out of the 24th and 25th seeds as well.

Women’s 50 Breast- Bluefish’s Laura Sogar, as mentioned, is sitting out this meet. SMU’s Tara-Lynn Nicholas scratched out of the 9th seed, and Long Island’s age group wonder Margaret Aroesty scratched out of 11th. Ohio State’s Taylor Vargo is also out, along with Mexico’s Ary Medina.

Men’s 50 Breast- Ohio State’s DJ Macdonald has scratched out of the fourth seed of the men’s 50 breast, along with Trojan’s Azad Al-Bazari. Macdonald’s teammate Dustin Tynes scratched from the 18th seed.

Women’s 100 Free- Megan Romano scratched this entire meet, so she’s out of the 100 free. Ohio State’s Sam Cheverton has also been absent this weekend, adding in a scratch in the 100 free.