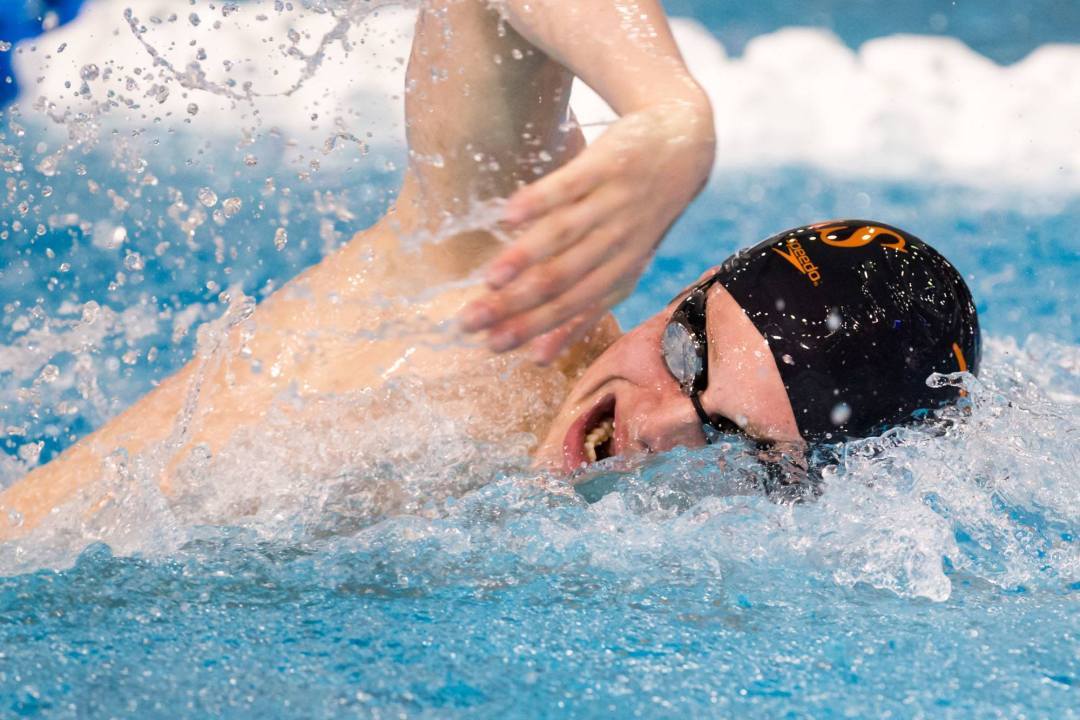 Texas Longhorn Jack Conger is one of several swimmers making their second appearance at the World University Games this week in Gwangju, South Korea. Swimming preliminaries begin in the morning of July 4th.

Swim teams have been in South Korea for several days, with Twitter and Instagram showing us the enthusiastic welcome the hosts provided to arriving teams.  The swimming portion of the Games kicks off the morning of July 4th, which will actually be Friday evening for our American readers and the middle of the night for most of our European audience.

Two years ago, Russia pulled out all the stops in order to dominate at home.  They were successful, winning 17 gold medals in the swimming events alone, and 29 medals total.  The USA came in second in both categories, with six gold, and 24 total medals.

This year Gwangju, South Korea, will serve as the host for the competition.  There was a brief scare about a month ago when South Korea faced an outbreak of Middle East Respiratory Syndrome (MERS), but fears have abated as there seems to be no public health risk, and the games will go on scheduled.

For many swimmers, this will be their first non-junior international meet, but there there will plenty of big names in attendance.  Japan is sending Akihiro Yamaguchi, who broke the world record in the 200 breast almost three years, but whom we haven’t heard much from since.  Yamamoto Kohei will also be returning to defend his gold in the 800 free from 2013.

The Russian team is not quite as star-studded as it was two years ago, but will include NCAA Division II superstar Anton Lobanov and Junior World Record holder Rozaliya Nasretdinova.

Jack Conger will be representing the US once again, but he will not be defending his title in the 200 back.  Instead, he will be swimming the 50/100 back and the 100 free.  Other big names for the US include Olympians Rachel Bootsma and Shannon Vreeland, rising star Andrew Seliskar, and the former American record holder in the 100 yard freestyle, Abbey Weitzeil.

The start lists came out this morning, and at first glance, a couple races stick out.  The men’s 200 breast will feature the aforementioned Yamaguchi, but also Kazakistan’s Dimitry Balandin, who was an honorable mention in our 2014 Swammy Awards for male breakout swimmer of the year, and comes in with the top time.  Josh Prenot of the United States and Craig Benson of Great Britain are the other two men with a seed time under 2:10.

On the women’s side, if the heat sheets are any indication, the 200 fly will be one of the tightest events.  China’s Yilin Zhou comes in with the top seed at 2:08.00, but Hali Flickinger of the USA is seeded second with a 2:08.33 and Italy’s Alessia Polieri has the third seed with a 2:08.62.

In the United States: ESPN3.com

Other Links and Info

All of our event coverage: http://swimswam.com/event/2015-world-university-games/

Link to the schedule.

Each day prelims will begin at 8:30am local time, and the evening session will start at 7:00pm local time.  South Korea’s time zone is UTC +9.

I haven’t followed his LCM times that closely, but it appears that Conger split 47.75 in the 4×100 free relay final, which was considerably faster than anyone else on the team. Can anyone confirm that the third split was indeed his? Love having him on the UT team…he’s like another Doug Gjertsen or (ahem!) Mel Stewart with the tremendous versatility.

Finals at Noon for me? Cool.

I thought Conger would swim the 100 fly. I’m disappointed. Now I want to see him swim a monster 100 free.
Time for Seliskar to swim under 1.55. Yes. He can do it.
And I expect something good from Vissering. He’s in my top 4 contenders for the next olympic trials. A big PB close to the minute barrier would be great.
These are the 3 US guys I will watch the most at that meet.
On the women’s side, I would be happy to see Miss Bootsma swim her best 100 back since the 2012 olympic trials.
What to expect from Abbey Weitzeil? The big meet for her… Read more »

noon
Sorry PVK. It was not a reply.

FYI, Conger didn’t choose the 100 free over the 100 fly. The team was selected on the basis of 2014 Summer Nationals, where Ellis and Josa were faster in the 100 fly than he was.

Pretty sure Pelton is not an Olympian. Maybe you meant Bootsma.

You are correct, thanks!