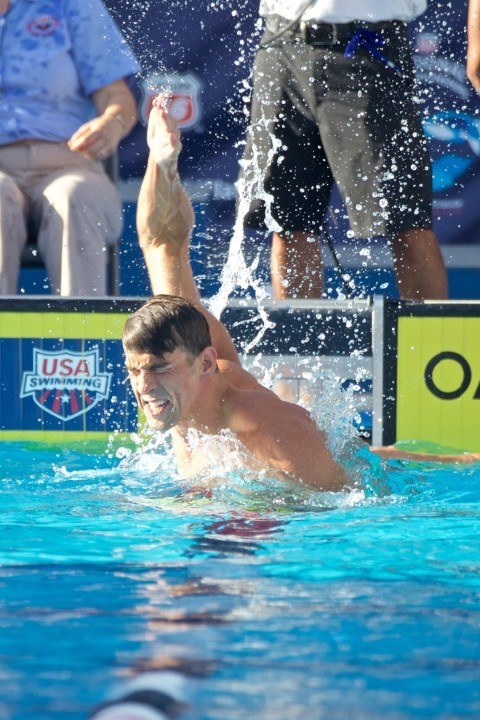 In that men's 200 breast, we'll see Michael Phelps. After a stellar meet, putting up the world's fastest times in the 100 fly, 200 fly, and 200 I.M., it should be fun to watch him challenge an off event. Current photo via Rafael Domeyko

Veteran Amanda Weir topped the prelims of the women’s 100 free. Her 54.64 was good enough to beat out Allison Schmitt in the final heat this morning. She was also close to her season best of 54.36 from the Pan American Games this summer.

After a day off yesterday following a 200 free victory, Schmitt looked very solid through prelims with a 54.81. She’s been a 54.46, also at Pan Ams this year. Those two women should make tonight’s final interesting. Weir is a sprint specialist, but Schmitt has been making improvements, working her way back to her London 2012 form.

50 free National Champ Madison Kennedy grabbed the 3rd seed for finals with a 55.14, just ahead of 17-year-old Katie Drabot in 55.19. Drabot is having a solid meet after swimming a best time to make the championship final in the 200 free. She was the fastest junior swimmer this morning.

Qualifying first in the 200 back, Dynamo’s Michael Taylor posted the third fastest 15-16 time in American history with a 1:58.41. He now only trails behind the legendary Aaron Peirsol and Ryan Murphy in the all-time rankings.

Robert Owen (1:58.92), Austin Katz (1:59.35), and Austin Surhoff (1:59.37) of North Baltimore will round out the A final for tonight. Katz was the Junior National Champion in this event last week and will look to qualify for the Junior World Championships tonight.

Bluefish Swim Club’s Laura Sogar, the bronze medalist in the 100 breast earlier this week, crushed her heat of the 200 breaststroke prelims. Sogar, the postgrad based at Texas, swam the top time of the morning in 2:25.16.

In heat 9, Emma Schoettmer of Tucson Ford hit the wall a whole body length ahead of the competition in 2:26.33. That was a best time by over a second, shattering the 2:27.49 she posted at the 2012 Olympic Trials. The University of Arizona senior will be tonight’s 2nd seed.

Annie Lazor of Auburn hit the wall in 2:28.79 to make the final in the 7th spot, just ahead of Anne Zhu (2:28.86). She came into the morning with the top seed after competing for Team USA at the Pan American Games this summer.

Surprisingly, SwimMAC’s Emma Reaney, the short course American record holder in this event, will not get a 2nd swim after a 2:33.42 this morning.

100 breaststroke national champion Andrew Wilson of Longhorn Aquatics posted the top qualifying 200 breaststroke time of the morning in 2:09.84. That swim moved Wilson into 19th in the FINA world rankings in this event, and makes him the 4th fastest American of 2015.

Wilson’s time will give him lane 4, right next to his summer training partner, Will Licon. Licon dropped a best time of 2:10.10 for the 2nd seed heading into finals ahead of BJ Johnson (2:11.92).

Across his career, Phelps has already won national titles in every other stroke. If he chooses to swim the event tonight, he could become the 2nd swimmer in history to have won American national championships in all four strokes.

Other notable swims include Avon Community’s Chandler Bray’s 2:14.55, the 2nd fastest swim in 15-16 age group history. The 15-16 NAG record holder in that event, Reece Whitley, qualified 10th with a 2:13.42, just a second slower than his NAG record swim from last week’s Juniors.

Someone better tell Phelps, because here’s what Marco Koch said:

https://www.youtube.com/watch?v=mAUY1J8KizU watching Phelps made this springs to mind.

I can’t tell you how many times I’ve heard this joke in the past few days.

Actually that may be a bit optimistic, but if Bob the Builder is right then it doesn’t matter anyway.

This is why I don’t do pick’em contests.

In fairness, however, I predicted his last three splits almost on the nose (0.1 off on the last one). I was just a full second off on the first 50.