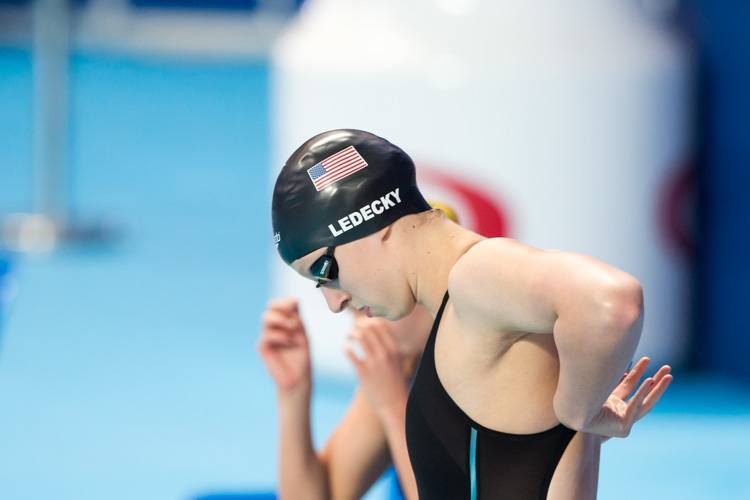 Katie Ledecky will have a tough double tonight with the final of the 1500m and the 200m semi Current photo via Tim Binning/TheSwimPictures.com

After a somewhat shaky prelim swim in which he qualified in 13th, American Ryan Lochte came back with a strong swim last night in the semi-final of the 200 free. The 2011 world champion qualified 1st in 1:45.36, and will have lane four for the final. The final is going to be loaded with talent, as Lochte will be flanked by 400m freestyle silver medalist James Guy in lane 5 (1:45.43) and Australian star Cameron McEvoy in lane 3 (1:46.09) who qualified 2nd and 3rd. Sun Yang will have lane 2 coming off his victory in the 400 free, with short course world champ Chad Le Clos in lane 6 and world record holder Paul Biedermann in lane 7. Sebastiaan Verschuren (NED) and Aleksandr Krasnykh (RUS) will swim in the outside lanes. 1st through 8th was separated by just 1.09 in the semi-final so expect the final to be very tightly bunched the whole way through. Some big names missed the final, including 2013 silver medalist Conor Dwyer, 2013 bronze medallist Danila Izotov and Pan American champion Joao De Lucca. With Yannick Agnel out with an injury and Dwyer and Izotov missing the final, we will have no repeat medalists in this event. It’s going to be a great race.

Australian Emily Seebohm has been dominant in the 100 backstroke the last two years and will look to win her first world title today. She will be swimming in lane 4 after qualifying 1st in a time of 58.56. Teammate Madison Wilson will have lane 3 after qualifying 3rd in 59.05, just off her personal best from earlier this year, and Mie Nielsen of Denmark will have lane 5 after finishing 2nd in the semi-final going 58.84, a new personal best. Those three look to be the top contenders for the medals after posting such quick times, but 2013 champion Missy Franklin can never be counted out. She qualified 5th in 59.42 and will have lane 2. Katinka Hosszu posted the top time in prelims of 58.78, but scratched the semi-final to be ready for the 200 IM final (which clearly paid off). Hosszu was certainly a medal contender, but her scratch opened the door for American Kathleen Baker, who finished 17th in prelims, to swim in the semi-final. She made the most of it swimming almost a full second faster than the morning qualifying for the final in 7th. Also swimming in the final will be Fu Yuanhui in lane 6, Anastasiia Fesikova in lane 7, and Lauren Quigley in lane 8. Among those missing the final, Pan Am champion Etiene Medeiros just missed finishing 9th.

Cameron van der Burgh and Adam Peaty continued their sensational swimming this morning in the preliminaries of the 50 breast posting the top two times. van der Burgh tied Peaty’s world record of 26.62 set earlier this year, and two heats later Peaty came close to doing the same going 26.68 for the second seed. The two other men who broke 27 seconds this morning had statement swims. Damir Dugonjic missed the semi-finals of the 100 breast but wasn’t going to same mistake twice as he qualified 3rd in a very fast 26.70. American Kevin Cordes failed to qualify for the 100m event at this meet so he was no doubt anxious to get his meet going on the third day. He swam a personal best 26.93 to place him 4th. The first semi-final tonight will feature Peaty and Cordes, along with Felipe Lima of Brazil and Giacomo Perez-Dortona of France. The second semi will feature van der Burgh and Dugonjic, along with Felipe Franca Silva of Brazil and Hendrik Feldwehr of Germany. Among those missing out on the semi-finals, 2013 silver medalist Christian Sprenger of Australia just missed finishing 17th and Japan’s Koseki Yasuhiro was well off the pace in 30th.

Everyone expected Katie Ledecky to dominate the women’s 1500 freestyle, but I don’t think anyone expected the performance she put on in the preliminaries yesterday. Ledecky broke her own world record of 15:28.36 swimming a 15:27.71 in third heat. She qualifies 26 seconds ahead of her closest competitor, Lotte Friis of Denmark who went 15:54.23. Jessica Ashwood of Australia was the only other swimmer under 16 minutes, with a 15:56.52. Kristel Kobrich of Chile swam 23 seconds faster than her entry time, qualifying 4th in 16:01.63. Lauren Boyle (NZL), Boglarka Kapas (HUN), Sharon van Rouwendaal (NED) and Aurora Ponsele (ITA) round out the final. We can expect Ledecky to dominate and push for another world record, and then the battle for the other medals should be terrific. Ledecky, van Rouwendaal and Ashwood will  be looking for their second medal of the swimming competition after medal performances on the first night in the 400. van Rouwendaal also won a silver medal in the women’s 10km earlier at these world championships.

Mitchell Larkin of Australia backed up his strong preliminary swim with a fantastic performance in the semi-final, posting a personal best 52.38 and the top time heading into the final. In the final he will be surrounded by a pair of former world champions, with 2011 champion Camille Lacourt swimming the 2nd fastest time in the semi’s of 52.70 placing him in lane 5, and defending champion Matt Grevers posting a 3rd ranked 52.73 putting him in lane 3. 200 backstroke star Rysouke Irie qualified 4th in 53.13, and rising Russian phenom Evgeny Rylov was 5th in 53.14. The field will be rounded out by Xu Jiayu of China and the British duo of Liam Tancock and Chris Walker-Hebborn, who will be in the outside lanes. The battle for the medals will likely take place in the middle of the pool, as those three were the only ones under 53 seconds. The field is still very tightly bunched and anyone could sneak in for a medal. 2013 silver medallist David Plummer just missed the final finishing 9th, and 2011 champion Jeremy Stravius finished 15th.

Heat 5 of the women’s 200 freestyle this morning saw two of the world record setters so far at this meet clash. Katie Ledecky and Katinka Hosszu raced to a 1-2 placing in the overall preliminary standings, with Ledecky leading the way in 1:55.82 and Hosszu not far behind in 1:56.32. Ledecky’s American teammate Missy Franklin qualified 3rd fastest in 1:56.42. Both Ledecky and Franklin will have doubles tonight, as Franklin will have the 100 backstroke final and Ledecky the 1500 final, both taking place before the 200 semi. It will be interesting to see how much the two women have left for the 200 and if they can both qualify for the final. Hosszu would’ve been in the same boat as Franklin with the 100 back had she not scratched the semi-final in favour of the 200 IM final. Among the others qualifying there was world record holder Federica Pellegrini in 6th, Australian Emma McKeon in 7th, and world #1 Femke Heemskerk of the Netherlands in 9th, perhaps looking a little shaky. Heemskerk will be swimming in the second semi alongside Missy Franklin and Katie Ledecky, so look for her to swim much faster than the 1:58.10 she did this morning. Missing out on the semi-finals was Melanie Wright of Australia and Melani Costa of Spain.

The men’s 200 fly was very close this morning, as places 3 through 12 were separated by just seven tenths of a second. 2008 Olympic silver medalist Laszlo Cseh looked amazing this morning setting the pace swimming the fastest time in the world this year of 1:53.71. He appeared especially strong on the last 50, going 29.33 and being the only one under 30. Viktor Bromer of Denmark also looked strong qualifying second in 1:54.47. Daiya Seto of Japan looked smooth and in control qualifying in 3rd. Also qualifying was Leonardo de Deus of Brazil, Tyler Clary and Tom Shields of the United States and Joseph Schooling of Singapore. The favourite in the event Chad Le Clos also qualified, but didn’t look as strong as expected and almost missed the semi-final. Le Clos was looking around like he usually does, but didn’t close anywhere near what we usually see from him. He ended up in a tie for 14th in 1:56.92. After his disappointing performance in the 50 fly we have to wonder if he is on form. Tonight will be very telling of that, as he has this along with the 200 free final to prove himself.

Lithuanian Ruta Meilutyte will look to win her second consecutive world title in the 100m breast today, but she will have her hands full with Russian veteran Yuliya Efimova. Efimova has looked good so far, posting the top time in both the prelims and the semi-finals, placing her in lane 4 for the final. Meilutyte was just four one-hundredths behind Efimova in the semi’s and will do battle with her in the final. Efimova will have the crowd on her side in what should be an excellent race. Those two seem to have separated themselves from the rest of the field, but the battle for bronze should be exciting as well. Kanako Watanabe of Japan, Alia Atkinson of Jamaica, and Shi Jinglin of China should all be close together for that last medal. The other three women in the final can’t be ruled out either, with Arianna Castiglioni of Italy, Jennie Johansson of Sweden and Hrafnhildur Luthersdottir of Iceland rounding out the field. Two-time 50 breast world champion Jessica Hardy fell short of the final, finishing 10th. Also missing out was 200m world record holder Rikke Moller Pedersen.

Anyone know where I can find the video of the 200 prelims? I missed them. Thanks!

Sorry, more specific, womens 200 free ideally, although I’d love to see any of them!

Deportes plus 3 on utube