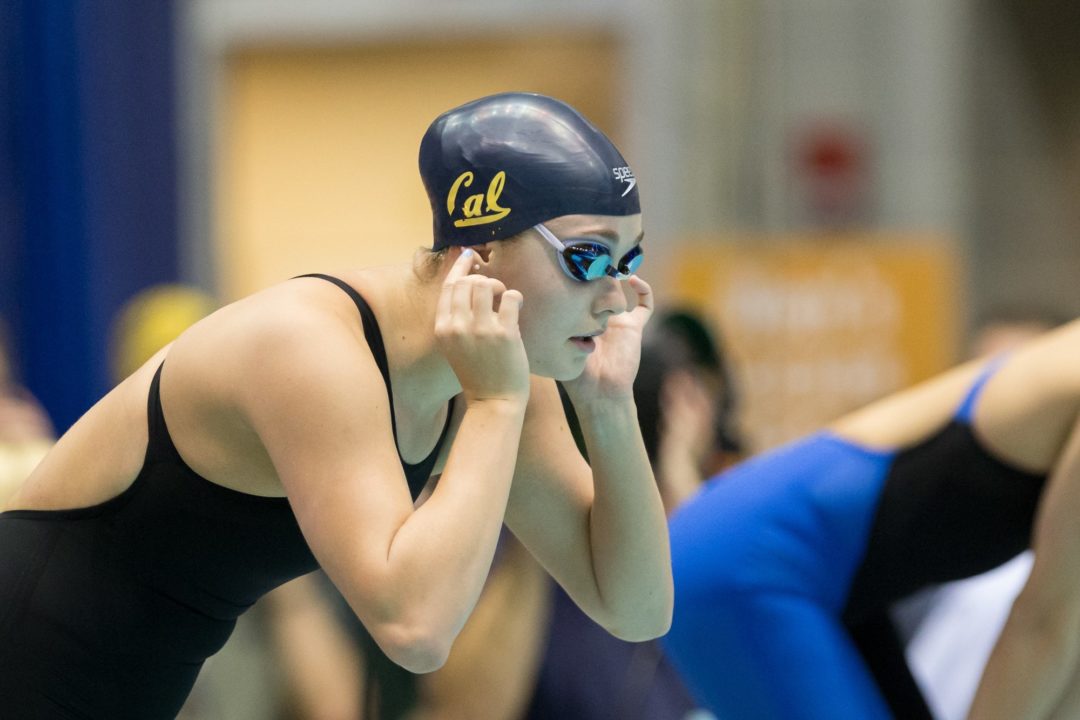 The Golden Bears put 13 swimmers up, almost double what Stanford or USC had this morning. They'll need to make the most of it, though, as they trail Stanford by over 100 and USC by almost 50 after last night. Archive photo via Tim Binning/TheSwimPictures.com

Stanford will look to defend their 2013 title against very strong Cal and USC teams.

Missy Franklin kicked her college dual meet career off with two wins in off events against Oregon State.

From our Conference Primer: The Pac-12 conference is absolutely loaded with female talent. There’s the star-studded California Golden Bears, likely the team to beat for the national title. There’s last year’s conference champs from Stanford, their own roster dotted with huge names and crazy talent. On top of that, there’s USC, who upset Cal in a big way in late January, Arizona and a rising young crew from UCLA. Though some of these teams might be focusing a little more forward, on the coming NCAA championships, conference rivalries still die hard, and for the most part, swimmers will be swimming hard to nab an invite to the national championships, making this an exciting conference showdown.

The top three teams saw their top swimmers engage in a sort of prelims dance to open the morning. The 400 IM is an event that almost necessitates some prelims coasting, and each team’s top IMer swam relaxed enough to finish well off their best, but still grab an inside lane for the final.

USC’s Stina Gardell leads the field at 4:09.87. 200 IM champ Maya DiRado is second with a 4:10.03, while her Cal counterpart Celina Li sits third in 4:12.55. Expect much faster tonight when the three go head-to-head-to-head with a team battle on the line. The 200 IM last night suggests none of these swimmers are fully primed to go, yet holding a bit back for NCAAs, so we might not see a sub-4-minute race like Elizabeth Beisel and Melanie Margalis put up at SECs a week ago, but it should still be an exciting showdown between some of the nation’s best.

Cal’s Kelly Naze did go a season-best, 4:12.84 good for fourth place. Some other teams snatched up the remaining finals spots, with UCLA’s Noelle Tarazona (4:14.68, fifth) and Lauren Baker (4:16.88) making up half that crew. Arizona’s Tjasa Oder was sixth and Arizona State’s Tristin Baxter eighth.

Stanford’s Felicia Lee dropped a 51.58 to lead the field into tonight’s 100 fly final. That’s a lifetime-best by a solid .8 for the senior, and moves her up to 7th in the NCAA so far this year. Once again, she’s followed by representatives of the other two teams in contention for the conference title. USC’s Kendyl Stewart went 52.04 for second, with Cal’s Rachel Bootsma 52.29 for third.

Those two should both have the potential to join Lee in the 51s tonight, making this another solid race at the top.

Cal took the next two spots with freshman Sophia Batchelor (52.54) and senior Cindy Tran (52.63). Arizona’s Ashley Evans is the final swimmer locked into the A final at the moment, going 52.95 for sixth.

The prelims session will end with some drama, as a 3-way swim-off has been set up for 7th and 8th place. UCLA’s Noelle Tarazona and Ting Quah both went 52.97, as did USC Trojan Jasmine Tosky, meaning barring any unforeseen scratches, two swimmers will get in and one will slip to the B final where they’ll race Cal’s Farida Osman, who was just .01 away from making it a 4-way swim-off this morning.

Update: The UCLA gals have triumphed in the swim-off. Tarazona won in 52.71 and Quah was second with a 52.79. They’ll both swim in the A final while Tosky will head the B heat after going 52.94. Faster times for all three women in a tight swim-off.

Cal freshman Missy Franklin is the top seed here, not a huge shock for the woman who holds the NCAA’s fastest time this season. She was 1:43.68 in the morning, a good two seconds off her best. She was quite a bit faster leading off the 800 free relay Wednesday night, and that was coming off anchoring the medley relay, so it’s certain Franklin can go faster tonight, but the question is if she’ll have to. Her Golden Bears hold the top 3 seeds in the event and Franklin is the clear favorite to win.

Caroline Piehl and Rachael Acker will try to hold onto second and third to complete the Cal sweep tonight; they were 1:44.07 and 1:44.43. USC’s Chelsea Chenault is breathing down their necks, though, with a 1:44.74. The freshman is having an outstanding season and was a big part of the Trojans’ big win over Cal a month or so ago. She’ll definitely factor in tonight.

Stanford put a pair of young swimmers into the A heat with Lia Neal (1:45.11) and Julia Anderson (1:45.36). Behind them are USC’s Katarzyna Wilk and Elizabeth Pelton, who snuck into the championship heat in the last qualifying spot.

Stanford’s Katie Olsen has come up big for the Cardinal several times already this year, and she’s put herself in position to do it again tonight. The junior holds the top 100 breast seed as the only swimmer under a minute in prelims. Her 59.89 is just off her lifetime-best and should give her a shot at the conference title.

Stanford’s Sarah Haase and USC’s Andrea Kropp rounded out an A final that features zero Cal Golden Bears. NCAAs is certainly a bigger focus rest-wise for Cal (like many of the other top teams here), but this event should do little to erase doubts about Cal’s hole in the breaststroke events. Yvette Kong was their top performer at 1:01.36 for 10th place; Melissa Bates was also 1:01 and Marina Garcia went 1:02 for the Bears.

On the other hand, Cal’s dangerous backstroking squad should help cover for any adversity they face in breaststroke. The Golden Bears sit on 4 of the top 5 seeds in the 100 back, led by sophomore Olympian Rachel Bootsma. Her 51.61 is almost the perfect result for Cal – fast enough to show Bootsma is back after some late-season struggles, yet well-enough off her best to suggest she’s got plenty more in the tank for NCAAs. She’ll probably have to push things a bit more tonight as Stanford’s Felicia Lee is only two tenths back at 51.81.

USC got one into the A final with Kendyl Stewart‘s 53.18. The fastest freshman in the field is UCLA’s Linnea Mack who sits seventh, and Utah’s Traycie Swartz rounds out the A final, nipping UCLA’s other freshman Madison White for 8th place.

This was a big day for Cal, who trail Stanford by 106.5 and USC by 47.5 after two days. The Golden Bears put 13 swimmers “up” (in the A final) and 9 swimmers “down” (in the B), the most in both categories, and almost double what Stanford and USC put in the A heat. UCLA also outdid Arizona this morning and should be in solid shape to hold onto third – they’re up by 8 at the moment.

Great pic of DiRado, looks like she’s laughing! Though I’m almost certain that nobody has ever laughed during a 4IM in the history of the race. 😛

Nice prelim swim by Felicia Lee- 51.58. Cal is making a move on USC but with diving I doubt they can catch Stanford.

Yeah Flea is continuing her great senior season, so glad to see her fully healthy and reaching her potential, and Bootsma appears to be starting to get back on track too just in time. Tough break for UCLA that Tarazona and Quah both have to expend energy in a swim-off. If it was only a two way swim off for 8th, they could pow-wow with their coach who could make an executive decision to avoid it, but since they need to race for 7th and 8th with a 3rd swimmer, they gotta go for it. Are the results of the swim-off available yet? My “Lo-TEK” “Real-Time” (not) results are not working–again!! thanks.