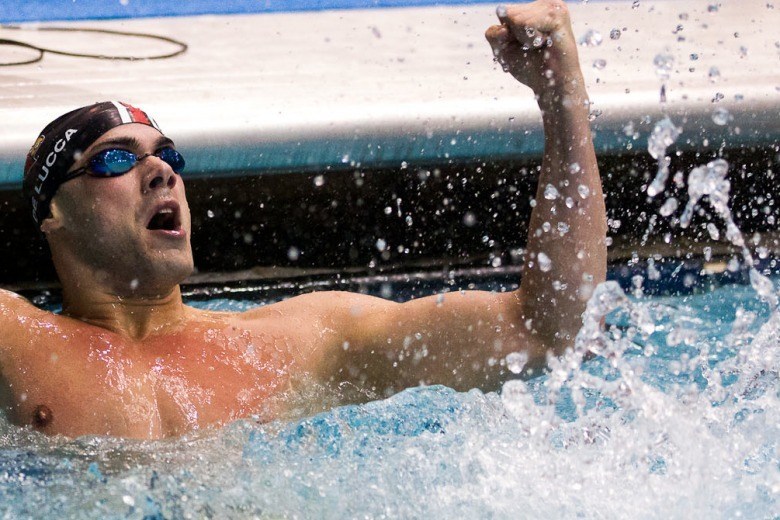 In the 200 free, Joao de Lucca will try to defend his NCAA title, break the NCAA record and perhaps even top his 2013 post-race celebration. Archive photo via Tim Binning/TheSwimPictures.com

This season, the 200 free has shaped up to be one of the more exciting events of the men’s NCAA Championships. Defending champion Joao de Lucca of Louisville has grabbed headlines with another great season, most notably winning a high-profile duel with South African pro and Olympian Darian Townsend to win the Winter National title while nearly besting his winning 2013 time.

Last season, de Lucca cruised his prelims swim, squeaking into the final by a mere .05. But the Brazilian took off at finals, winning the title from the outside lane in what was one of the more memorable races of the entire meet (followed by one of the more memorable post-race celebrations). It’ll be interesting to see how de Lucca approaches prelims this year, but at finals you can bet he’ll be his typically aggressive self, going after the front half like there’s no tomorrow. The hope for fans is that we get to see the first 1:30-point in NCAA history after de Lucca went 1:31.65 in December with a final 50 that really dropped off but should improve with a full taper.

Chief competitor to de Lucca should be Michigan senior Michael Wynalda. A returning A-finalist, Wynalda exploded at Big Tens as the hero of Michigan’s American record-setting 800 free relay on day 1. Wynalda crushed an insane 1:30.60 split, instantly putting himself in the NCAA title conversation. Though he was a bit slower, relatively speaking, in the open 200 (1:32.14), he still won the Big Ten title by a longshot, and clearly has the speed to put up a 1:31 from a flat start.

Praised at Pac-12s for his versatility, USC junior Cristian Quintero probably finds his sweet spot somewhere between here and the 500 free. Quintero was 1:32.81 at the Pac-12 championships, and he’s got the unique combination of speed and endurance to be genuinely scary over this distance.

Those three seem to be the cream of the crop and should probably battle it out amongst themselves for the top three spots. Still, there’s some talent lower on the psych sheets that could jump into the hunt with a big swim. Clay Youngquist was an A-finalist last year for Texas and had the luxury of mostly swimming through the Big 12 meet while still winning a conference title. He went 1:33.72 back in December, so don’t be surprised to see some time drop off that seed this week.

Stanford’s Tom Kremer is seeded way back at 24th, but he’s still well off the time he went in taking 3rd last season as a freshman. A big time drop and a high-scoring finish looks like it’s in Kremer’s future.

USC has a pair of point-scoring threats in addition to Quintero. Dimitri Colupaev was second last year with a huge finals swim, and talented freshman Dylan Carter is seeded 8th in his first semester competing for the Trojans.

After Emma Reaney won Notre Dame’s first NCAA swimming title this past weekend, Frank Dyer will look to put up his own high finish for the Fighting Irish – he’s seeded fourth with his ACC-winning 1:33.20.

Connor Jaeger took 8th place last year for Michigan – he’s all the way below the invite line in the 200 this year, but didn’t swim the event individually at the Big Ten championships. Known more for the mile, Jaeger continually shows that he’s got some speed to him, and he was 1:32.47 on the end of Michigan’s 800 free relay at Big Tens, a meet he probably wasn’t fully rested for.

Georgia’s Mathias Koski and Cal’s Will Hamilton battled it out in the B final last year as underclassmen, and both come in with low seeds but plenty of time to drop this year.

Darkhorse: Zane Grothe, Auburn. Grothe is another guy who wasn’t even invited in this event, but he also didn’t need to key on it much at SECs as the mile was his real ticket into the meet. Grothe is a distance man, but if there’s a school that consistently finds ways to help its freestylers gain speed, it’s Auburn. Grothe was 1:34.1 last year and 1:35.1 the year before that. Another yearly time drop like that would put Grothe awfully high in what’s clearly his third event.

I love seeing them all strive for it with futility during full taper,… and then witness Agnel do it in practice…

Is there video of this feat?

Can´t find any recent news of 50 free.. Alan Vitoria went 22.26 50 free.. That will make some changes on World Ranking