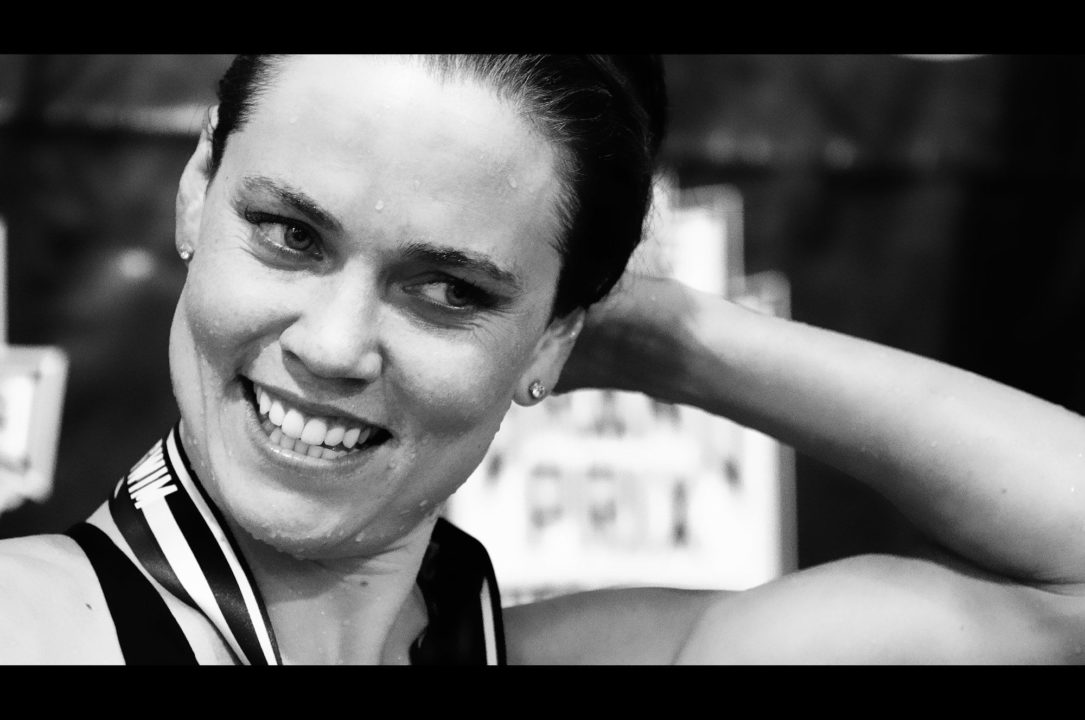 Natalie Coughlin has a new focus and new training partners, and could be a new force in the 50 free. (Photo: Tim Binning/TheSwimPictures.com)

American women’s sprinting is going through a rough stretch at World Championship meets (and if it weren’t for the ageless, now-retired Dara Torres, the same would be true at the Olympics).

The American women haven’t won a World Championship medal of any color in the 50 free since Amy Van Dyken in 1998. That’s a 6-meet scoreless streak: the longest on the World Championship schedule for women, by five years (or two meets.)

That’s a streak that doesn’t look totally likely to end this year, either. The best chance may lie not in a new face, but a familiar one taking on a new focus: the legendary Natalie Coughlin.

Coughlin, now training in a group specifically with Anthony Ervin and Nathan Adrian at Cal, has given up the 100 backstroke that she once revolutionized and has given up the 100 fly that she toyed with prior to London. She is now strictly a sprint freestyler, and is expected to focus on the 50 and the 100 at Trials.

She’s already showing off that focus this year, having been a lifetime best of 24.90 at the Mesa Grand Prix. Yes, in the long and illustrious career of Natalie Coughlin, she is still setting lifetime bests at 30 years old.

The other best chance for American medals comes from Jessica Hardy, the incumbent Olympian who was 7th at last summer’s Games. She hasn’t looked quite as good as Coughlin this year, with a 25.38 in Mesa, though Hardy may be at a different spot in her training cycle, having put in a big fall racing Short Course Meters in Europe.

The Americans’ other Olympic representative in this race, Kara Lynn Joyce, won’t be swimming at the World Championship Trials (though she says she isn’t officially retired), meaning that there’s a spot open for Barcelona to Coughlin or a handful of other sprinters.

That includes Christine Magnuson, who despite being the #2 American in this event in 2012 finished only 3rd at Trials (she was out-touched in finals by Joyce). She took a little bit of time getting back into racing after missing the Olympic squad; she used just a quick tuneup at the (yards) Winter Nationals, then swam at the Short Course World Championships. Her first long course competition wasn’t until February’s Orlando Grand Prix, but with a 25.33 there (followed by 25.47 in Mesa) shows that she’s still in the mix.

Madison Kennedy from SwimMAC Carolina has been even thinner than Magnuson in her participation; she swam a local Charlotte meet, and then some serious competition at the Orlando Grand Prix where she went 25.4 in the 50 free in 56.9 in the 100.

It would seem as though perhaps it’s time for this American sprint group to get some young, new blood into its mix, and the best options perhaps all come from the West Coast.

Geer, Woodward, and Jensen are the best known of those three from their exploits in the NCAA. Jensen and Geer are both NCAA Champions in the 50 yard freestyle (Geer in 2013, Jensen in 2010 and 2012), and Woodward has swum some really impressive relay splits.

But you might never guess who of those four was the highest placed at the Olympic Trials in the 50 free. It was Flederbach, the Arizona Junior, who placed 6th at Trials: one spot ahead of Geer (Jensen and Woodward didn’t final).

Flederbach has never even made the B-Final at NCAA’s, though she was very close – 17th place – last year. She’s placed 11 spots higher at the Olympic Trials, then, than she has at the NCAA Championships. That’s  a pretty stunning representation of how good she is on top of the water.

No swims by Lara Jackson this year, who was a finalist at Trials. Erika Erndl will be 35 by the time this meet rolls around, and yet still continues to get better-and-better (though most of her focus this year has been on rounding out her schedule with a lot of different races.)

Megan Romano is an interesting case. Her best bet at making this World Championship roster is probably the 100 and 200 freestyles. Last year, though, she took on a much bigger schedule that included the 100 back and the 50 free. She might be well-served to pass on those two races and focus on just the 100/200; that might be a bit of a selfish perspective, though, as I would love to see her on a relay in long course in case she has the same incredible relay abilities that we see from her in short course.

Lia Neal made the Olympic Team in the 100 free last year. Her 50 has historically not been as good, but over the last year or so she’s made big moves in improving her versatility. We’re talking tenths here, so it’s not much of a gap for a teenager to make up.

New Faces to the Game

Above are the names we all know about, and a look at where they sit. But what about the young swimmers in the high school or college ranks who weren’t really a factor at Trials, but could be this year?

Tennessee’s Faith Johnson, the SEC Champion in yards, cut half a second off of her best time in short course already this season. A similar drop in long course puts her in a 25-low. She could final, but probably a bit far to make the team.

Olivia Smoliga is no newcomer in backstroke races, but this year broke the National High School Record in the 50 yard freestyle by becoming the first woman under 22 seconds in yards in a high school race.

First Colony’s Simone Manuel is the next great American sprint freestyler; this summer, though, the 16-year old’s best shot this summer seems to lie in the 100 free, though with her spectacular rate of improvement means she’s not to be counted out.

16-year old Abbey Weitzeil quietly put up an impressive 25.56 in long course a few weeks ago at a low-level club meet. By the time Trials rolls around, she’ll have been training under Coley Stickels for about 6 months; he’s been the subject of plenty of conversation and discussion after his departure from the Phoenix Swim Club, some in his favor and some not, but there’s little question about his ability to develop young sprinters. She’s got a late high school championship meet (this weekend, in fact), so we’ll have to watch to see how she handles that just 7 weeks out of Nationals.

Check out three different opinions on the top 8 below. Times included are the best times from January 1, 2010 onward.

Way to go Natalie! Best of luck! Way to prove to these antiquated thinkers that girls don’t peak at 14.

Agree for Miss Coughlin and Miss Hardy. Natalie said at the last grand prix in Mesa she was happy to finally have a season to focus only on freestyle. I think this choice will pay off. But please, new faces. The women’s 50 free is the weakest race in USA on the women’s side for many years now. Simone Manuel is a great young talent. But it’s still a little early for her. Probably in 2 years she will be the girl to beat in USA in the 50 free and in the 100 free. Abbey Weitzeil? Wow! I didn’t know her.