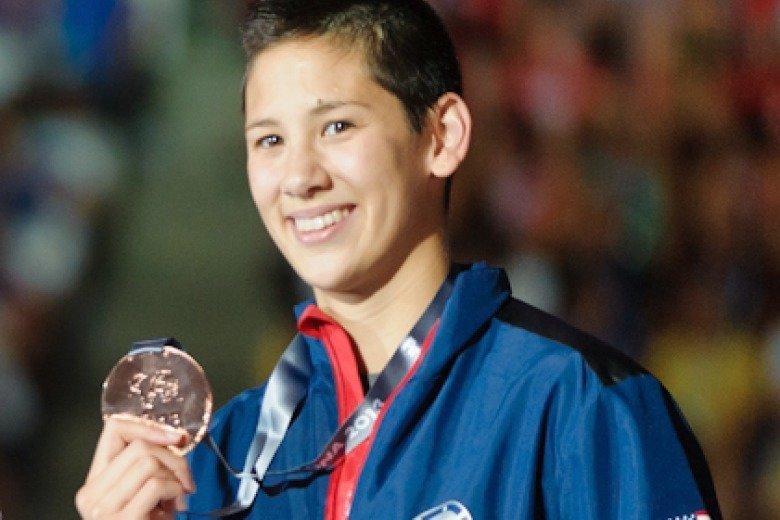 Worlds bronze-medalist Micah Lawrence will be a part of the American breaststroke squad that's trying to score big points against the Europeans. Archive photo via Victor Puig

The teams seem to still not quite be set in stone, but with every change (most notably and recently, Ryan Lochte’s injury), it seems as though the Americans’ grip on this series of national/continental-team duel meets gets more-and-more tepid.

The opening for the Europeans could be in experience. There is no race other than breaststroke where timing becomes more important. That’s especially true for the 6’1″ Larson, who swims with an extremely long stroke. With how carefully she has to time her 4-6 strokes per length in yards, she could get stuck on a few walls with the meters pool being about two yards longer than she’s used to.

Hardy also hasn’t raced since the World Championships, though she probably will swim at Winter Nationals in the United States just before leaving for Glasgow.

So, while the Americans are the favorites in this race, there’s certainly a potential opening for the Europeans to score in the format that only awards points to the top three.

At any rate, the Europeans have some pretty good swimmers of their own. Moniek Nijhuis is the Dutch National Record holder, and has already approached that record with a sub-1:05 in August in short course.

Fiona Doyle came into her own this summer as well, breaking the Irish Long Course National Record.

In the 200, things look much different for the Europeans. Hannah Miley is a great 200 breaststroker, if the Europeans decide to use her there. Though Doyle and Nijhuis are not as good in the 200, Allen certainly is.

For the Americans, Larson is the only swimmer on the team who is a really big threat in both the 100 and the 200. Again, though, with only three scorers, that probably doesn’t matter. Micah Lawrence took bronze in long course in the 200 breastsroke at this past summer’s World Championships. She’s never been quite as good in short course as she has in long course – for example, her long course 200 best time (2:21.7) is better than her short course meters 200 best time (2:23.6), though the latter of those times came in 2010, before her big breakout.

Hawthorne, like Miley, is primarily an IM’er, but also brings value in the 200. She probably swims that 200 breast on an American team without a ton of options.

Overall, this should be a win as a discipline for the Americans.

As theres no set entry date i know Ruta is concentrating on the European short course championships but do you think maybe if she feels like it she could be a late comer she is based in the UK too ?

sm – there seems to be no entry deadline, and that would be a HUGE lift to the Europeans, especially with Rikke Moller not swimming. I think more than Euro Championships, though, her focus this season is largely on school as well, so that’s a factor.