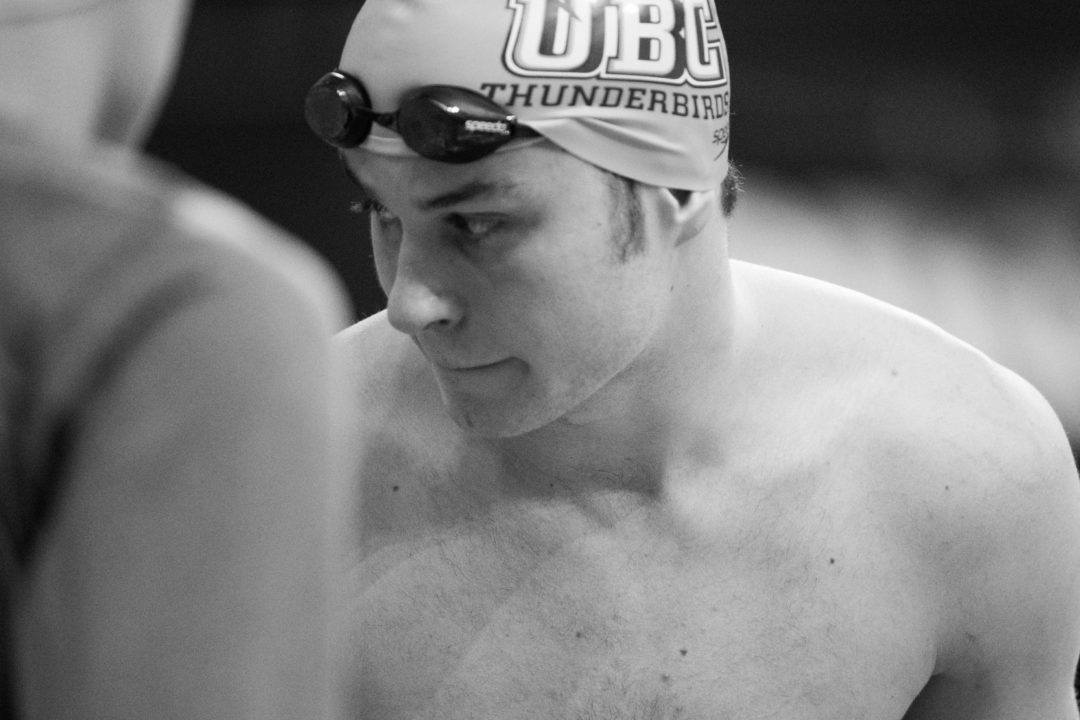 Kisil will move east to Toronto to train under Ben Titley at the High Performance Center. Archive photo via Mike Lewis/Ola Vista Photography

22-year old Canadian Olympian Yuri Kisil has turned pro, leaving the UBC Thunderbirds program and focusing his preparation entirely on the Tokyo 2020 Olympics. As part of the decision, Kisil will be moving across Canada to Toronto where he’ll join the National Performance Centre and train under Ben Titley.

While Canada’s west coast was the epicenter of the last generation of top Canadian swimmers, their recent unparalleled run of success has come out of Ontario, and especially Toronto.

While the pieces are moving, and many but not all have spent time at the National Training Centre, the names that are either from or based out of Ontario include former World Record holder Kylie Masse, Penny Oleksiak, Erika Seltenreich-Hodgson, Hilary Caldwell, Kayla Sanchez, Rebecca Smith, Mabel Zavaros – the core of the women’s team that has lifted the country to Olympic and World Championship podiums.

The current group that is listed as specifically training at the High Performance Center in Ontario are Michelle Toro, Sanchez, Rebecca Smith, and Taylor Ruck (though we know Ruck is beginning her first semester at Stanford in the United States).

While at UBC, Kisil led the team to 3 U SPORTS (Canadian collegiate) national championships, sweeping the 50 and 100 free national titles in each of those three years. He was a two-time U SPORTS Male Swimmer of the Year and in 2016 was named UBC’s top male athlete.

U SPORTS athletes have 5 years of eligibility, as compared to the 4-year system employed  in the US by the NCAA.

Kisil says outright that his goal is to win a medal at the 2020 Olympic Games.

“My goals going forward are to get better at the sport,” added Kisil. “I have certain times I want to achieve and still tons of accomplishments that I have yet to check off my list. My main goal moving into the 220 Olympics though is to make it onto the podium.”

He won a pair of bronze medals as a finals swimmer on Canada’s mixed relays – bringing his total to 3 after being a part of the bronze medal winning mixed 400 free relay at the 2015 World Championships.

In the summer of 2018, he took another bronze medal in the 50 free, swimming 22.02 to place behind only Michael Andrew and Caeleb Dressel at the Pan Pac Championships.

“I had an amazing experience being involved with UBC and its swimming program,” said Kisil just before heading to Toronto. “It helped me to progress as an athlete, and I made many lifelong friends. I loved my time here, I’m very grateful for the opportunities provided and it’s a time in my life that I’ll never forget.”

“The great coaching staff and my teammates pushing me every day in the pool really helped me achieve my goals. Every day I came to the pool I knew If I wanted to win a set I would have to give it my all and that really helped me push myself at each practice.”

“Yuri helped elevate the program to great heights in his three seasons on the Men’s Varsity team as evidenced by the three national titles he was a big part of,” said UBC head coach Steve Price. “He was an integral part of our relays and led our men by winning the U-Sport “Male Swimmer of the Year” the last two seasons. Yuri took on a leadership role at the Championship competitions, supported his teammates to perform their best and injected lots of fun in the pursuit of the U-Sport titles. Yuri will be missed as a popular teammate and the guys know they will need to step up this season to his shoes. I want to thank Yuri for his time as a Thunderbird and wish him the best of luck as he pursues his international aspirations at the National Performance Center. Once a T-Bird always a T-Bird and we are excited for his future in this sport.”

Not sure if “going pro” is the correct headline. He has been as professional as you can get in Canadian swimming (Speedo sponsored, collecting prize money), Canadian university swimming doesn’t have NCAA restrictions. He will still have university eligibility if he wants to use it in the future. Switching programs may be the better headline.

UBC sure does think he’s turning pro. But, I guess you know better than them.

He hasn’t lost any eligibility. He can come back to UBC and use up his last two years.

UBC isn’t going to announce “Our top swimmer is leaving our program for our #1 rival” He went “pro” three years ago when he took the year off to train for 2016.

Considering that’s from Rio 2016, I think he has the potential for a significant jump. At least enough to break into 47 territory and qualify for the Olympic final in 2020.