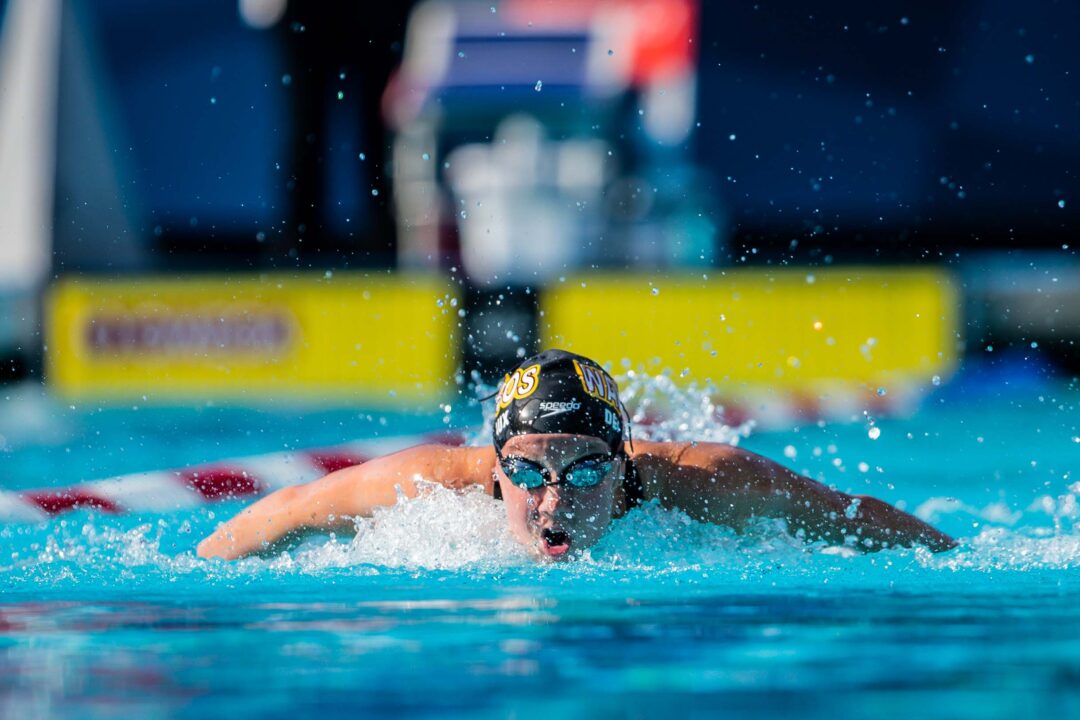 12-year old Audrey Derivaux of the Jersey Wahoos came closer to Cassidy Bayer's all-time record in the 200 fly than anyone in history has. Archive photo via Jack Spitser/Spitser Photography

A new talent emerged on day 1 of the 2022 USA Swimming Speedo Junior National Championships in the girls’ 200 fly.

12-year old Audrey Derivaux of the Jersey Wahoos swam her way to a 6th-place finish in the B-Final, good for 14th overall, continuing what has been an electric summer for the young swimmer from Mount Laurel, New Jersey.

In total, this summer, she has swum best times in the 200 fly in four different races, improving her time from 2:24.34 last summer by more than six seconds.

Her time is now the second-fastest in history by an American 12-year old, behind only Cassidy Bayer’s 2:15.02 from 2012. That swim by Bayer in 2012 at the time left her more than four seconds ahead of the next-best swimmer of that age ever.

Derivaux’s rise this summer has been methodical and impressive (see coverage here and here), much in the way one would expect from a 12-year old. The difference from the average 12-year old is that her times are among the best-ever by a swimmer that age.

This season, she ranks #1 among 11-12s in a dozen different events between long course and short course, and as the second-fastest in seven further events.

In the 200 fly on Monday, Derivaux was two years younger than any other swimmer who qualified for any of the three finals, and in fact was the 0nly swimmer born later than 2007 to even enter the event (she was born in 2009).

The time slips her under the U.S. Open qualifying standard as well.

Maddie Wright was from Michigan, not California when she did that time. KA is Kingfish Aquatics out of Waterford, MI

that bayer record is insane