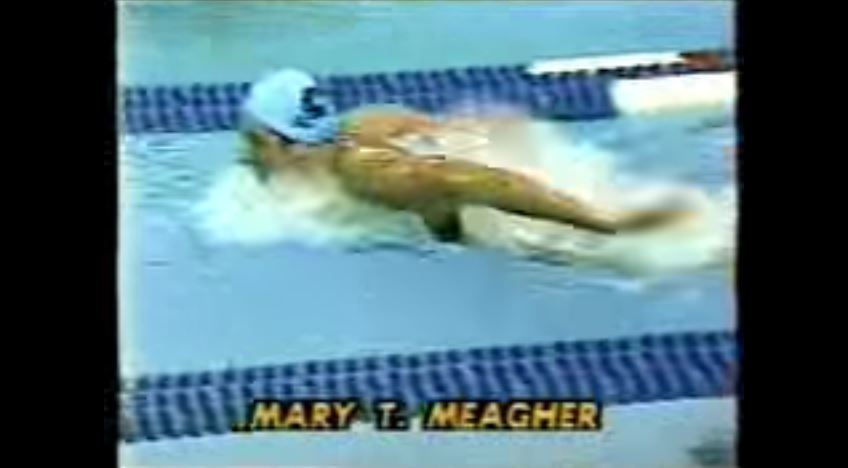 Since our last look at the records back in July of 2015, only 2 of the 10 oldest NAG records have been broken, but there's a fresh class of contenders hungry to get their names in the history books. Archive photo via MrSwimmer1992 on YouTube

While this isn’t a new phenomenon, having age group swimmers going insanely fast times is becoming more and more commonplace every year. Most recently, at the Pro Series meet in Richmond, Virginia, Josh Zuchowski broke the 13-14 NAG 100 LCM backstroke record formerly held by Michael Andrew and Claire Curzan became the youngest U.S. Woman to go sub: 59 in the 100 LCM butterfly to break a record from 2009. It seems that National Age Group Records are being lowered at every championship meet, but what you may not know is that there are 13 records that are at least 23 years old, including one SCY record, still standing.

Beard set both of these records at the 1996 Olympics in Atlanta, becoming the second-youngest Olympic medalist in American history winning two silvers, missing out on gold in both by a combined .7 seconds.

At 12 years old, Beth Botsford was quite the rising star on the American swimming scene, placing in the top at 8 at nationals in 1994. She would go on to make the 1996 Olympic Team at 15 years old and took home a gold medal in this very event, finishing just a half second off of the Olympic Record.

Contenders and likelihood the record gets broken: It is quite surprising that this record has survived the onslaught of very talented backstrokers that we have seen over the past couple of years. In 2018 Maggie Wanezek got very close to breaking the record as a 12-year-old with a 1:03.6. The next best chance at seeing this record get broken is in Zuri Ferguson who has a best time of 1:05.33 and will age up sometime in March of 2020. ★★☆☆☆☆

With her time as a 14-year-old, Amanda Beard was already very close to holding this record as well. When Anita Nall set this record at the 1992 Olympic Trials, she also broke the world record in the process; however, she wasn’t able to replicate her success at the Olympics and settled for a bronze medal.

Contenders and the likelihood the record gets broken: Zoe Bartel got extremely close to owning this record in 2016 going at 2:25.46 as a 15-year-old, but wasn’t able to shave off the necessary.11 seconds to get the record. Currently, there hasn’t been anyone even close to breaking 2:30; Anna Keating is the age group leader with a 2:31.44 and will age up in the fall. ★☆☆☆☆☆

The only short course yards times on this list, age group phenom Chas Morton’s time of 51.85 will turn 35 years old at the end of August of this year. With how rapidly development in short course yards swimming has been, including the popularity of new training models such as USRPT, this record should have been challenged more often than it actually has.

Contenders and the likelihood the record gets broken: No one has broken 52 seconds since 2015, in fact, only Jarrett Payne has been sub :53 in that time frame and NAG record holder in the 200-yard butterfly Dean Jones was only 53.07 at the time. Over the period of the 2019 competition year (9/1/2018 to 8/31/2019) 12-year-old Thomas Heilman leads the way with a time of 53.21. The fact that he ages up around February 2020, along with the other points listed above, this record has the possibility to be broken sooner than the data might imply. ★★★☆☆☆

It makes more sense to honor this record as its own as opposed to lumping it in with its short course counterpart, but the platitudes towards Chas still apply; having two records in different courses that will soon be old enough to run for president.

Contenders and likelihood the record gets broken: This record looks about as safe as it gets. The only swimmer to go under a minute in the age group since 2015 was Winn Aung (59.7) and current age group leader Kaii Winkler has only been 1:04.66. ★☆☆☆☆☆

Videos of the races

When discussing the greatest NAG records of all time, the discussion tends to begin with Mary T. Meagher’s butterfly times as a 16-year-old. Just for reference, both of these records were also world records for almost 20 years, and her 200 butterfly time would have taken 5th place at the 2016 Olympic Games in Rio, just .06 behind Cammile Adams as the fastest American.

Contenders and the likelihood the record gets broken: While the 100 fly looks to be a little more attainable, the 200 time is still proving to be a challenge for any woman to best, at any age. Oddly enough, when Canadian Penny Oleksiak swam a 56.46 at the 2016 Rio Games as a 16-year-old, she was faster than Mary’s time, but it didn’t count because of her foreign representation. Current Cal swimmer Cassidy Bayer got close to breaking the 100 fly record by going a 58.11 as a 16-year-old in 2016 and Regan Smith went a 2:07.42 in the 200 fly, missing that record by under a second and a half.  Recently, however, only one female has been under a minute in the 100 fly and no one has been faster than 2:10 in the 200 fly. ★☆☆☆☆☆

Mary T. Meagher also set the 200 butterfly record for the 13-14 age group 40 years ago. It was her very first world record when she first set it at the Pan American Games, which she lowered twice until going 2:07.01 at U.S. Nationals. Similarly to her time in the 15-16 age group, this time also would have been good for 5th place at the 2016 Rio Olympics.

Contenders and the likelihood the record gets broken: There haven’t been any swims in the last 5 years that have been faster than 2:10, with Justina Kozan going a 2:10.83 in 2018 as the closest attempt to even making the record break a sweat. ★☆☆☆☆☆

Watch part of the 200 free record

Cynthia “Sippy” Woodhead won three gold medals and two silver medals at the 1978 World Championships as a 14-year-old where she set, and still holds, the NAG records in the 200 and 400 free. Interestingly, she would have to miss the 1980 Olympics due to the boycott but would swim in the 1984 Olympics and take home a silver medal in the 200 free.

Contenders and likelihood the record gets broken: Right now 11-12 NAG record holder in these events Claire Tuggle is 14 years old and sports career-best times of 1:58.58 and 4:10.11 in the 200 and 400 frees, however, she will age up in the beginning of July and the only big long course meters meet left are TYR Pro Swim Series meets. Erin Gemmell, daughter of Katie Ledecky’s club coach Bruce Gemmell, is currently 13 years old and sports a career-best time in the 200 free of 2:00.74 so this record has a good chance of being broken. ★★★☆☆☆

Hackett finishes 2nd behind Brian Goodell in the 1976 Olympics

When Bobby Hackett went 15:03.91 at the 1976 Olympic Games, he went below the world record at the time, but lost to fellow American Brian Goodell for the gold medal and ultimately the holder of the world record title.

Contenders and the likelihood the record gets broken: With the current trend of drastic sprinting development, it is no surprise that the two oldest records would be 1500 meter freestyles. In 2016, current Florida freshman Robert Finke went 15:05.29 as a 16-year-old. As of right now, Lleyton Plattel has a career-best time of 15:35.36 from when he was 14 and will age out of the 15-16 age group in the second half of July. ★☆☆☆☆☆

Jesse Vassallo holds the title of “Oldest Standing NAG Record” by setting his time at the 1976 Olympic Trials whereas Hackett set his a month later at the 1976 Olympics. Vassallo was born in Puerto Rico and moved the mainland United States at 10 years old. In 1976 he wanted to represent Puerto Rico at the Olympics, but wasn’t allowed to due to the fact that in order to do so he would have had to live on the island for a full year leading up to the games, which lead him to compete at the U.S. trials and ultimately miss the team. After not being able to compete at the 1980 games due to the boycott, Vassallo finally got to swim in the Olympics for the United States in 1984 but missed out on getting a medal. He is also linked to the popularity of the underwater dolphin kick, which has arguably been the biggest game changer in the sport of swimming.

Contenders and the likelihood the record gets broken: Like Hackett’s record for the 15-16 age group, this record is rarely contested. In 2017 Lleyton Plattel went 15:35.36 as a 14-year-old, marking the closest anyone has gotten in the last 20 years. Current Georgia freshman Andrew Abruzzo missed the record by about five seconds in 2014, and the 3rd fastest swimmer in this category since the turn of the century is actually Michael Phelps from the 2000 National Championships, missing the record by just over eight seconds. ★☆☆☆☆☆

Torri Huske recently broke Mary T’s record. And they didn’t even mention her in the contenders…

Sippy Woodhead’s 200 free NAG was also the American and World Record. She would drop it by three-tenths in the following year to 1:58.23, and it would remain the American record until Nicole Haislett broke it to win gold at the 1992 Barcelona Olympics. Still, she was so far ahead of her time that she would have won Olympic medals all the way through 2004.

Can you imagine Mary T in a modern suit or a 12 year old Chas Morton in a jammer?

The 1980 boycott deprived so many swimmers of their moment of glory. Stupidest decision ever made.

Hate to be pedantic, but Vassallo didn’t “move to the United States” at age ten since PR is part of the US.

How are Amanda Beard’s records 2 stars and Anita Nall is 1 Star when no one has even been close Beard and her record is almost as fast as the 15-16 record? I would think those ratings should be flipped

I have read hundreds and hundreds (thousands?) of SwimSwam articles since the site launched. This one might be all-time favorite. Bravo Lucas!

In this business, they say never read the comments, but I really did enjoy this one. Thank you!

I think the women’s 15-16 record is in more danger than you indicate in the “near” future. CC as a 14 year old just went a 58.6. That indicates a potential to break the record in the next 2 years once she ages up.

My thoughts exactly. They must be weighted that 1-star on the 200 record more than the 100 record. I’d say the 100 record is def in danger given CC isn’t even 15 yet and is within a taper of it.