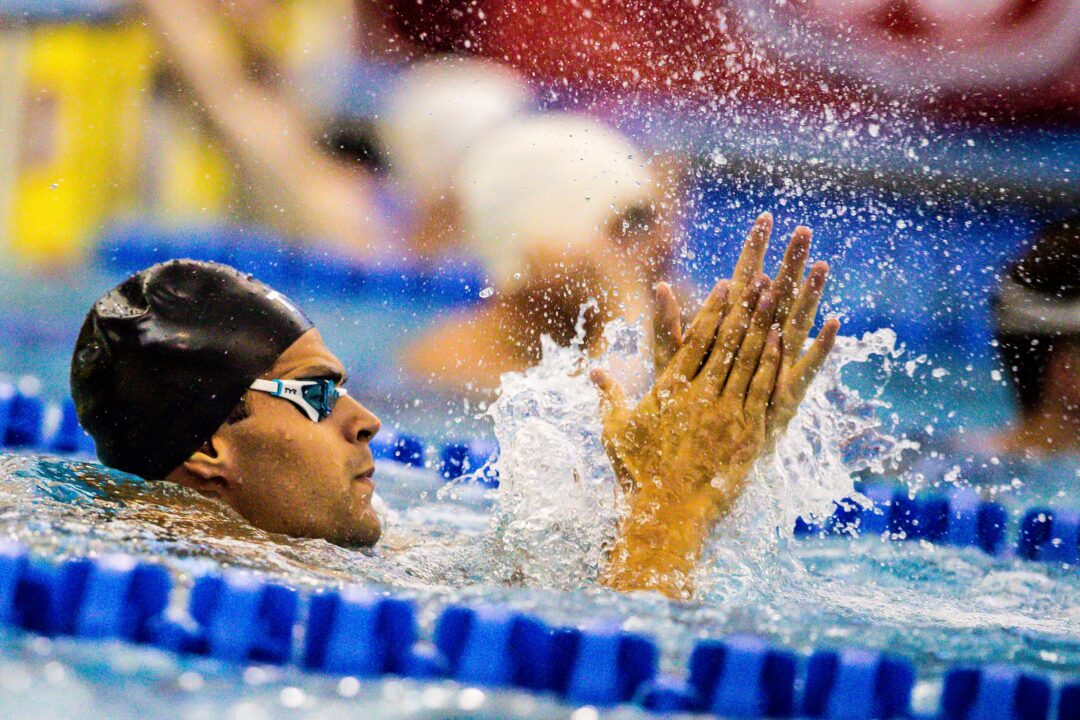 The 2022 U.S. World Championship Trials was full of close races- here are the top 10 closest margins that determined who would represent the U.S. at Worlds. Current photo via Jack Spitser/Spitser Photography

The US World Championship Trials last week provided one shot for swimmers from across the country to earn a chance to compete at the 2022 FINA World Championships. Worlds will be held in Budapest later this summer, with the pool swimming portion of the competition running from June 18-25. The full qualification criteria for team USA can be found here.

Making the US National team is very competitive and, in many races, comes down to mere tenths of a second. Here is a list of the top 10 closest margins from the 2022 Trials that determined who made the World Championship team:

Of these 10 athletes that narrowly missed the qualifying spot, five of them made the team in other events.

In the 50 freestyle, both Gretchen Walsh (24.53) and Claire Curzan (24.55) narrowly missed earning an individual berth, placing third and fourth, respectively, behind Erika Brown (24.52).

In addition to coming within .01 of making the team in the 50 free, she also made the ‘A’ final of the 50m backstroke and 50m butterfly, coming in 5th and 4th, respectively.

The other athletes on this list who made the Worlds roster in another event are Bobby Finke, Michael Andrew, Nic Fink, and Kieran Smith.

In the 400 IM, Finke dropped .87 seconds off his previous best time, set at the Olympic Trials last summer. However, that drop wasn’t quite enough to qualify for Worlds, as he finished a mere .07 seconds behind Chase Kalisz. This was the closest finish of the Trials by percentage, with only .03% separating second and third place.

Although he just missed the chance to swim the 400 IM at Worlds, Finke will be representing the USA in the 800 and 1500 meter freestyles.

Michael Andrew finished second in the 50 butterfly, clocking in .03 seconds behind Caeleb Dressel. In the 50s of stroke, only the top finisher is guaranteed a spot on the final roster. However, since Dressel was also the winner of the 100 fly, Andrew gets a spot in the 50 as the fastest swimmer in the event already on the Worlds roster. He also qualified in the 50 free, 50 breast, and 100 breast.

Nic Fink is in a similar situation to Andrew. He narrowly missed a guaranteed spot in the 50 breast by .03 seconds, but ultimately will compete in that event anyway. Fink won the 100 breast in a time of 58.37, dropping .13 off his previous best from Olympic Trials. He finished second to Andrew in the 50 but beat him by .14 in the 100. Fink will also be competing in the 200 breaststroke where he tied for first with Charlie Swanson.

A notable name that is missing from the final roster is Lydia Jacoby, 2021 Olympic Champion in the 100 breaststroke. At Trials, Jacoby competed in the 50 (3rd), 100 (4th), and 200 (5th) breaststrokes. The closest she got to making the team (by percentage) was in the 100 breaststroke, where she finished .09 seconds away from Annie Lazor in second place. Finishing between Jacoby and Lazor was Kaityln Dobler in a time of 1:06.19, just .07 away from Lazor’s 1:06.12.

No mention to Zane Grothee ?

Gretchen is so close! Excited to see how this motivates her.

What about Shane Casas in the 50 back?

by “ Curzan is the only woman on this list who made the team in a different event”, they meant that the other 4 ladies out of the 10 on this list did not make the team (GWalsh, Dobler, Jacoby, Gemmell)

Lydia needed 20 more centimeters. Or a faster start. I was rooting for her all the way

I was desperately rooting for Dant to hold on, and for Gretchen to win the touch. Both agonizing. Gretchen in particular had so many ways to make up that missing hundredth. Obviously her reaction time is poor. Then when she surfaces she pauses briefly before the first stroke. I’ve noted that previously but it really stands out in a frantic 50.

I still thought her incredibly long reach would bail her out. Normally she times it perfectly especially in short course. But this time her final stroke ended slightly too far away so there was a reach and glide element. Too much. Her arm was second out of the water behind Huske but Erika Brown was torso closer.

This was almost an ok comment until your unnecessary last sentence.

6
0
Reply
For the Love of the Swim

When was the last time someone other than Ledecky won three events at a world or Olympic trials?

Dressel? At literally every major meet since 2017?

Should have been more specific. Bud. Do you know when the last time a women did it?

Should have been more specific bud. Bud do you know the answer to the women?

This year by Torri Huske (I already said this in another comment).

Although he placed 7th, I could still see Kieran swim prelims on the 4×100.

Held has the experience to swim only finals, and Curry and Dressel will probably be saved too so I could see him on it.

What “experience” does Held have that warrants him to swim only in finals? He’s made one other international “A” team, and that was 6 years ago.