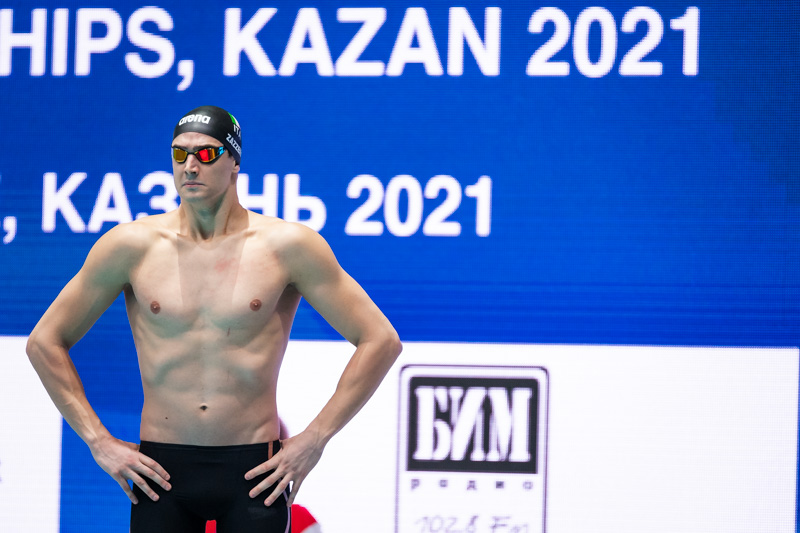 Lorenzo Zazzeri was among the 4 Italian men who just established a new World Record in the 4x50m medley relay at the European Short Course Championships. Current photo via Giorgio Scala / Deepbluemedia / Insidefoto

The men’s 4x50m medley relay World Record just went by the wayside on night 2 of these 2021 European Short Course Championships.

The Italian foursome of Michele Lamberti, Nicolo Martinenghi, Marco Orsi and Lorenzo Zazzeri scorched a massive time of 1:30.14 to not only stand atop the podium but also surpass the previous WR of 1:30.44 Russia put on the books at the 2017 edition of this meet in Copenhagen.

Russia settled for silver tonight in a time of 1:30.79 while the Netherlands followed up on its freestyle relay gold from night 1 with a bronze here in 1:32.16, a new Dutch Record.

As for Italy, lead-off Lamberti is having a breakout meet, culminating with a trio of medals today, his 21st birthday. He already earned silver in the 50m back and silver in the 100m fly in this, his first elite senior international meet.

His opening split of 22.62 to start this relay actually beat out his individual swim, with his earlier effort checking in at 22.65 behind winner Kliment Kolesnikov. Kolesnikov was 22.58 in the relay and won the individual in a new meet record mark of 22.47.

As far as relay splits go, Kolesnikov and Lamberti now top the all-time rankings as #1 and #2, respectively with their performances tonight.

Martinenghi took over for the breaststroke leg, with the 22-year-0ld posting a quick 25.14 before veteran Orsi did the damage on fly in 22.17. Martinenghi, who will contest the men’s individual 100m breast final tomorrow, just clocked the fastest split ever.

Finally, Zazzeri, who already crushed a monster free split of 20.24 yesterday for free relay silver, dropped that down even further to 20.21. He now becomes the 5th best really performer ever, with tonight’s new posting representing the 7th best performance.

After the race, Zazzeri said of Italy’s history-making performance, “It is an incredible feeling, it was a battle all the way till the end. I mean, this the world record… I’m almost speechless and overjoyed and happy for us, as a team. As far as my split is concerned, I didn’t think I could do better than yesterday but I did as I swam 20.21. This makes me
hopeful for the final tomorrow as my individual semi-final didn’t go well earlier. I have positive feelings for tomorrow.”

His teammate Lamberti echoed the emotions, saying, “It has been an unforgettable day. It couldn’t have ended in a better way. I always try to concentrate on finding my inner energy and that give me self-confidence for the races. The world record is just incredible. Deep down, I knew we could do it. I can hardly find anything else to say today, in fact, just this morning we were teasing and joking that maybe we could break this record and we did it. That’s unbelievable.”

Martinenghi also chimed in, “I’m very satisfied, it is true we were joking this morning about breaking the world record. We knew we could do it. We were really smart on how we prepared our tactics for this race. All the splits are just incredible, the record was a dream of ours.”

Swear the Manaudou/Blume kids will be another level if they choose to swim and forgo a modeling/acting career, the 50 free record is on watch the moment they have one

I believe that both of those are not officially recognized. I go off the All-Time Top Relay Splits tool from USA swimming