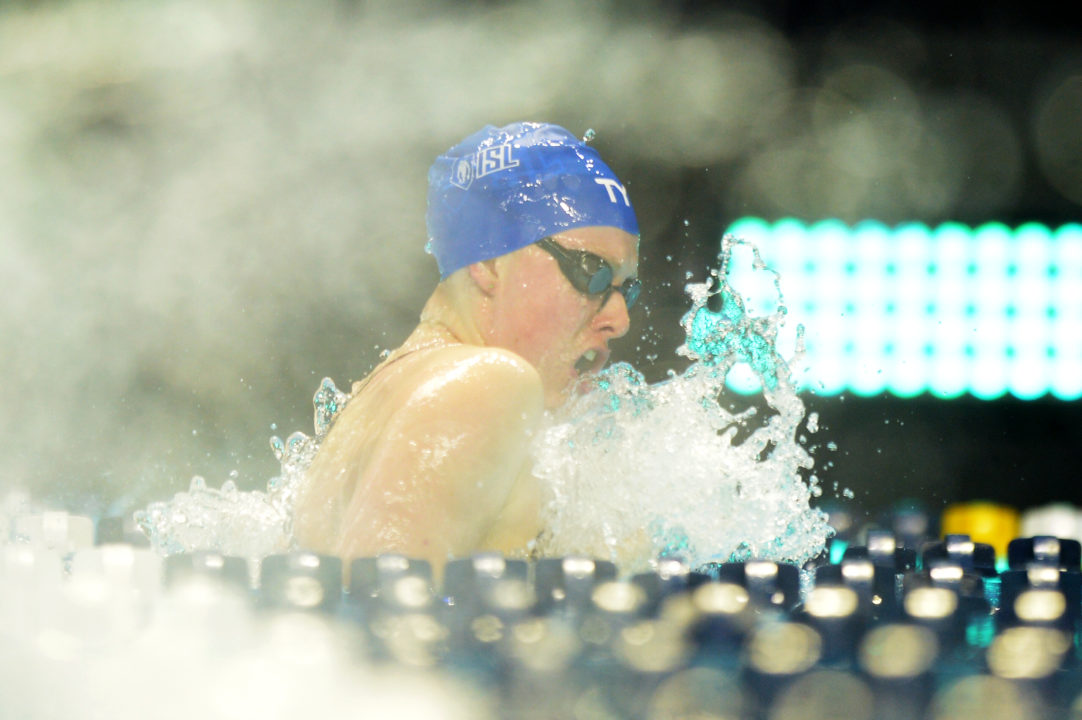 Lilly King has a huge opportunity to seal victory for the 1st-place Cali Condors in the women's 50 breaststroke skins race. Archive photo via Gian Mattia D'Alberto/LaPresse

For Cali, the choice was always obvious. The team that didn’t lose a women’s medley relay all of the 2019 season did so again on Friday by almost a second.

With the two best women’s breaststrokers in the meet, and probably in the league, the choice was clear-cut for the Condors, who sit in a surprising 1st place after the first day of competition, 45-points ahead of the defending champion Energy Standard.

Much of that margin has been built on the backs of the women, who are 84 points better than Energy Standard’s women.

The interloper is a 15-year old named Benedetta Pilato of Energy Standard, who slid just between the two Condors with a new Italian and World Junior Record.

There is still a lot of swimming to be done at this meet, but there is a potential for the 50 breaststroke battle in the semifinals to have the victory hinged upon it: whether it is 2 Condors or a Condor and a Standard…er in that finale.

At this point it seems unlikely that anybody else will intrude on that top 3, unless there’s a shocking input from an unexpected corner like a Sarah Sjostrom. But with Imogen Clark already on the roster, it makes more sense for Energy Standard to leave Sjostrom on the mixed free relay and try to win that.

Maybe more significantly, this leaves room for teams to stack the women’s side of their mixed free relays, which we didn’t see much of last season because of the proximity to the high-value skins event.

The men’s side was not so clear-cut, but the LA Current have chosen backstroke as the men’s skins event.

Ther Current men outscored the men of every other team on day 1, including a 1-3 finish in the 100 fly (Tom Shields, Maxime Rooney) and a 1-4 finish in the 50 backstroke (Ryan Murphy, Dylan Carter).

While the defending World Champion in the 50 back Zane Waddell didn’t make the team’s 14-man roster for this meet, it still probably made sense to chose the backstroke, because the backstroke avoids two of the biggest stars in the league: Caeleb Dressel, who was an absolute untouched powerhouse in skins last season, and Chad le Clos. While neither was at their best on day 1, in the skins format, both are still absolutely lethal.

Instead the Current will get Justin Ress and Coleman Stewart, a pair of NC State Wolfpack swimmers, who went 2-3 in the individual 50 back. With Kliment Kolesnikov not swimming well on day 1 for Energy Standard (he was 8th in the 50 back individually), that eliminates one big threat.

Murphy of that group is easily the best 200 backstroker, so his endurance should make this a more confident win for the Current.

After that, getting Dylan Carter into the semis is a huge goal.

Lurking after tying for 4th in the individual 50 back is French powerhouse Florent Manaudou. Best known as the 50 free Olympic Champion from 2012, he is the current World Record holder in the 50 back in short course meters.

The Current have an interesting choice to make, as they do have Tom Shields to throw in there. While professionally, Shield’s focus has been on butterfly, he was an NCAA Championship-winning backstroker at Cal, and in short course is more-than-capable. But they might be better served to just keep him on the mixed 400 free relay.

With a much tighter meet than expected, Energy Standard needs some wins on day 2, plus some big skins points, to knock off the Condors. This backstroke isn’t ideal for them, but they have a puncher’s chance thanks to Manaudou.

They don’t even do the 800m individual

Sorry… why would ES suddenly put Sjostrom in the breaststroke skins?!