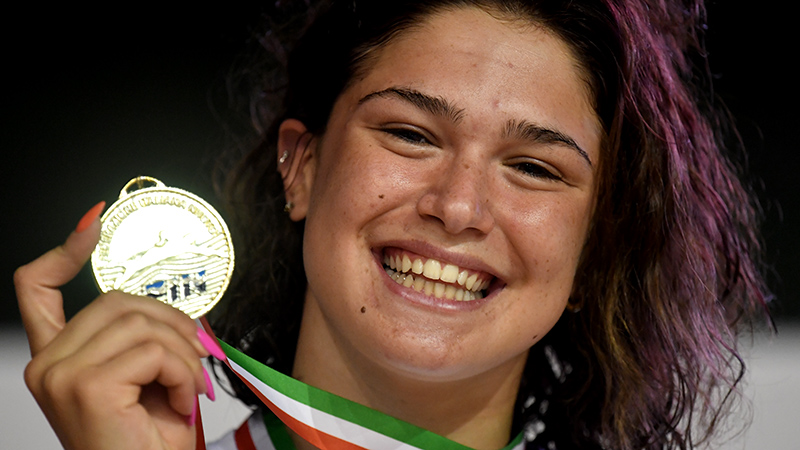 Pilato was the World Championship silver medalist in the 50 breaststroke in 2019 at just 14-years old. She is a late addition for the defending ISL champions Energy Standard. Archive photo via Photo Andrea Staccioli/DBM/Insidefoto

While teams’ preliminary rosters were announced on Wednesday during a live stream fan/press conference, most teams have told SwimSwam that they are still expecting some changes between now and the October 16th start of season 2 of the team-based professional league.

For the defending champions Energy Standard, who already debuted a very strong roster on Wednesday, the addition will make them even stronger. As of yesterday, the team only had 15 women on their roster, on its way to 16, so they had room to add Pilato without anybody dropping out.

The 15-year old Pilato won a silver medal at the 2019 World Championships, just past her 14th birthday. She has continued that success into 2020 – at the Sette Collli Trophy meet in mid-August in Italy, she broke the Italian Record in the 50 breaststroke again with a 29.85.

This summer, after the meet lockdown from coronavirus lifted, she has also improved her best time in the 100 breaststroke from the 1:08.21 done at the World Championships last year to a 1:07.06.

Energy standard already has two quality breaststrokers on their roster in Breeja Larson, who joins the team from the New York Breakers, former 200 breaststroke Junior World Record holder Viktoria Gunes, and Scottish Record holder Imogen Clark. The team also has Canadian Mary-Sophie Harvey, who can swim a lot of races well, including a 2:25 in the 200 breaststroke in long course.

The addition of Pilato to the roster gives them more flexibility to play the hot hand in an event that is one of the team’s weakest, though that’s in relative terms.

Like Clark, Pilato doesn’t swim much 200 breaststroke – her best official time is 2:56 in long course. Larson is capable of swimming all 3 distances. Gunes, in spite of that 2015 Junior World Record on her resume, that was only half-a-second away from the World Record, has really focused more on the IM races over the last 4 years of her career.

More importantly, this gives Energy Standard a huge option if the skins race is in breaststroke. A new wrinkle in season 2 includes a rule that the team that wins the medley relay on day 1 of the meet gets to pick the skins event on day 2.

Last year, the skins race was all freestyle. That event includes 3 rounds of swimmers racing a 50 meter sprint, with the field being whittled from 8 to 4 to 2 in each round. The event is the highest-scoring of the meet and offers the winning team a significant advantage.

Given Pilato’s quality over 50 meters, and her young age allowing for faster recovery, she could be electric in that event. The only swimmer who was faster than her at Worlds last year, American Lilly King, swims for the Cali Condors and didn’t lose a race in season 1 of the ISL.

Note: Gunes’ best times are all from 2015. She has not been close to those times in the years since.

Of that group, Larson has the most success in season 1 of the ISL. She ranked 70th overall in the league in scoring, even without the Breakers advancing to the double-points Las Vegas finale. She was ranked 39th in the league overall by the ISL’s new “aggregated rating” system.

Clark was 102nd in the league in MVP scoring and 112th in “aggregated rating,” while Gunes was used sparingly by Energy Standard early in the season.

Given her young age, she will be accompanied by Italian coach Steffano Nurra. Nurra, who lives in Turkey where Energy Standard’s training group is based, is a technical swimming analyst who runs the company Swim Lab. He has worked closely with Pilato’s coach Vito D’Onghia, who was unable to leave Italy for 5 weeks to accompany her because of other work obligations at home.