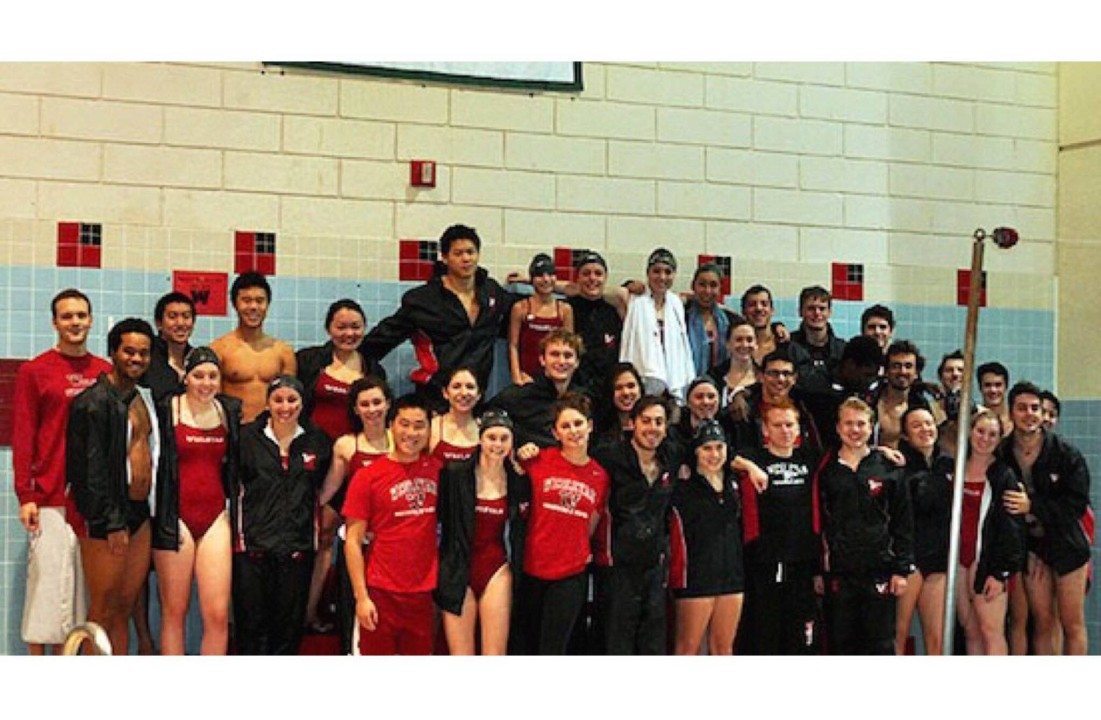 On November 8th, 2014, Aliana Fichera was drafted to the Wesleyan University Swimming & Diving Team. Although she stood a couple feet shorter than most of her 45 new teammates, Aliana accepted her team gear with a big smile and the poise of an adult. WATCH her draft day video, put together by Wesleyan junior Lawrence Ma, below!

Aliana’s young life, unfortunately, has been marked by monthly blood transfusions, anxiety, and frequent hospital visits whenever she gets sick. “Aliana’s illness is called common variable immunodeficiency (CVID),” says her mother, Tina Fichera. “I’ve always been a bit neurotic where Aliana has been concerned. She was born 8 weeks early weighing 3lbs 11oz, and we spent close to 4 weeks in the NICU. When she got older she was getting sick all of the time, so when she was in 3rd grade, we were referred to the Connecticut Children’s Medical Center (CCMC), and that’s when we found out she had CVID.”

She was born 8 weeks early weighing 3lbs 11oz, and we spent close to 4 weeks in the NICU.

The ten-year-old, multi-sport athlete was able to join the team thanks to Team IMPACT, a program that matches children with chronic or life-threatening illnesses with college athletic teams. Read more about Team IMPACT on their website, here.

Aliana and her family, which includes parents Tina and Phil and little sister Grayce, came to Wesleyan’s annual intersquad meet on November 8th for Aliana’s Draft Day. She was given a team locker, along with a team suit, cap, jacket, and swim bag, and with a few words from Coach Peter Solomon and a Team IMPACT pin, she was officially drafted onto the team. She’ll be coming to all of Wesleyan’s home meets, and members of the team visit her during her monthly, stress-inducing blood transfusions to take her mind off of things.

Tina also reflected on the magnitude of Aliana’s situation. “The hardest part is to see your child ask her doctor about having a permanent port put in and what it involves. It’s those times that reality sinks in that this is forever.”

Despite the unfortunate circumstances that Aliana must live in, Tina believes that this relationship between her daughter and the team has been nothing but positive. “I have no words… I mean look at Aliana’s face– there you will find the answer. I haven’t seen her smile this much in a very long time! The support you have all shown her is incredible. When Carly [diver on the team] was with her at the hospital, and someone asked if she was her sister, Aliana replied, ‘Yes, and I have 45 big brothers and sisters in all!’ You all have given her something to look forward to and a huge sense of belonging.”

When Carly [diver on the team] was with her at the hospital, and someone asked if she was her sister, Aliana replied, ‘Yes, and I have 45 big brothers and sisters in all!’ You all have given her something to look forward to and a huge sense of belonging.

Team IMPACT has touched the lives of well over 500 children faced with chronic or life-threatening illnesses, and has connected these children with college athletic teams in 42 states, to date. Visit http://www.goteamimpact.org/ to donate and learn more.

This is what life, sports and team work is all about. It is about buidling people up and enhaning each other’s lives. Go Wesleyan Swim Team.

That,s you, Peter — You have always been one of the most thoughtful caring coachs ever !! Kudos to you and your Team Don