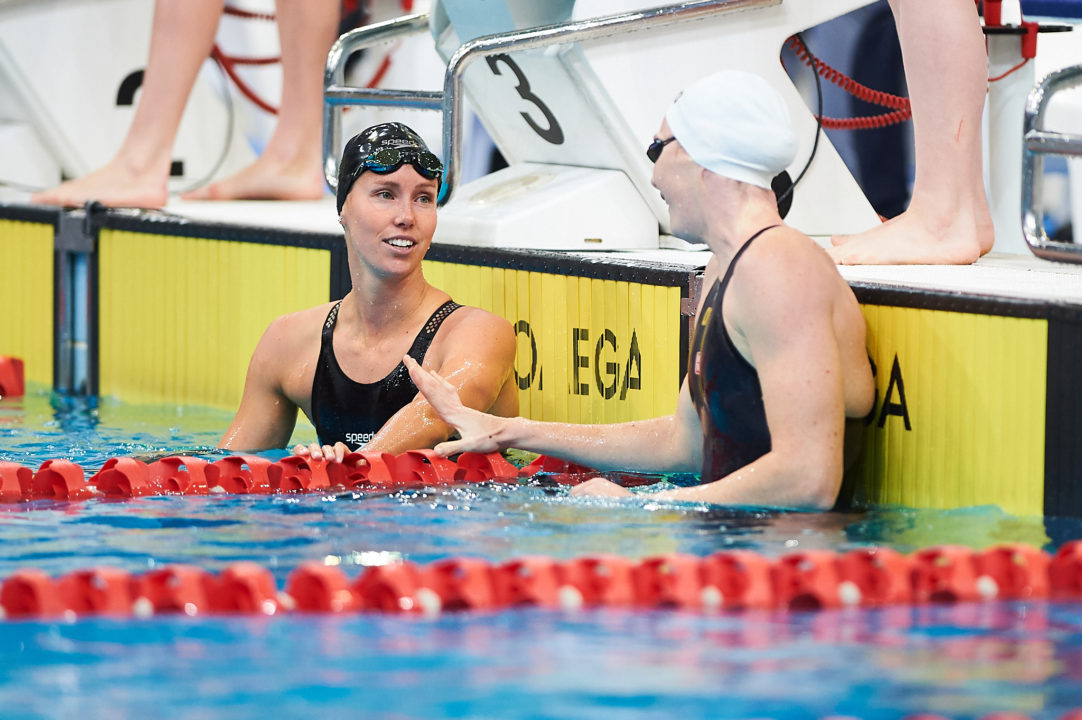 As you can read more about in our specific post here, 25-year-old Emma McKeon busted out her best 200m free time ever, clocking 1:54.55 to deny Ariarne Titmus her 2nd event win here in Brisbane. Instead, McKeon took her 2nd gold of these Trials, doubling up on her 100m fly World Championships qualifying effort from night 1.

McKeon split 55.35/59.20 to beat out even the 1:54.92 that earned her the bronze in this 200m free at the 2016 Olympic Games, making this her fastest performance in 3 years. She now moves into the 2nd slot in the season’s world rankings, only behind Titmus’ 1:54.30 newly-minted National Record she produced in April at Australian Nationals.

Shayna Jack missed out on individual qualification in this race, but put up the best time of her career in a bronze medal-worthy swi m of1:56.37. That hacked .4 off of her previous best ever of 1:56.77, a mark established as lead-off on on the St. Peters Western women’s 4x200m freestyle relay that won gold at Nationals.

Finishing 4th tonight for a relay spot in Gwangju was 23-year-old Western Australianer Brianna Throssell, the former fly specialist who finished 8th in the Olympic 200m fly final in Rio. Since, Throssell has been turning on the jets in the freestyle events, in addition to keeping up with fly, churning out a new personal best tonight.

Throssell’s 1:56.62 marks just the 2nd time ever the UWSC athlete has been under 1:57, giving Australian another powerful weapon in its 4x200m freestyle arsenal.

Shaking up the all-time Aussie list, Jack now enters the ranking as the 5th fastest ever, while Throssell now becomes the 7th fastest Aussie in history.

Emma McKeon demonstrated a typical sprinter’s approach to the 200 race. With one but very significant exception: she didn’t die at last fifty, like for example did Missy Franklin in Barcelona or Emma herself in Budapest. Very impressive but usual for her the open 26.18. But even more impressive and definitely unusual was the keeping of the steady pace at the second half of the distance. It can happen only once in life time and I don’t think it’s repeatable. 29.60 -29.60 !!! Wow! Congratulations. Interesting if Titmus saw from her lane #2 the lane #5 with accelerating Shayna Jack and that she is safe with the second place in this race. There was no usual strong finish from her… Read more »

1) Why the steady pace at the second half of the distance isn’t repeatable for Emma McKeon?
2) Titmus safe with the second place because of an “accelerating” Shayna Jack? Titmus finished 1 second and 28 hundredths ahead of Jack and was faster even in the last 50 (surely disappointing considering her standard): 29.74 vs 29.86
3) Imo also before this race Sjostrom had decided to not race in the 200 free at Worlds, sticking with her decision after Rio2016 (too tiring 3 rounds of 200 free before 100 free and 50 fly and free).

1. Because I know only one sprinter being capable of doing that at the 1:54 level of competition. It was Sarah Sjostrom who immediately after that said: never again. And I trust her expertise 😀 2. Titmus was perfectly aware that she is behind of McKeon and I’m not sure that being in the lane #2 she has known of what was going on with the rest of the field. I would worry if the possibility of missing WC where she was #1 contender can become a reality. Especially when she clearly felt that she was slowing down not being able to push herself for the strong finish. Do you remember race in Budapest where McKeon and Ledecky had about… Read more »

I don’t think that Titmus knew that Emma swims her personal best and being that much behind she could guess that she is about 1:55 high – 1:56. I would call it a dangerous zone. Or maybe (and most likely) nothing like that was in her head and she just swam how it was possible at the moment. The only reason I started this talk was that she didn’t look happy during the interview and was heavily breathing. Maybe it was her hurt ambitions of not being #1 in the country or maybe something else.

Epic wasn’t only Pellegrini’s finish but also the fact that Ledecky and McKeon, both had the slowest last fifty of any swimmers in this race. And Pellegrini despite being so successful also said right away: that’s it. Never again.
I have only a conspiracy theory to explain this. 😀

Emma attacked the swim – good on her. Congratulations.

Titmus seems to have a bit of an attitude too.