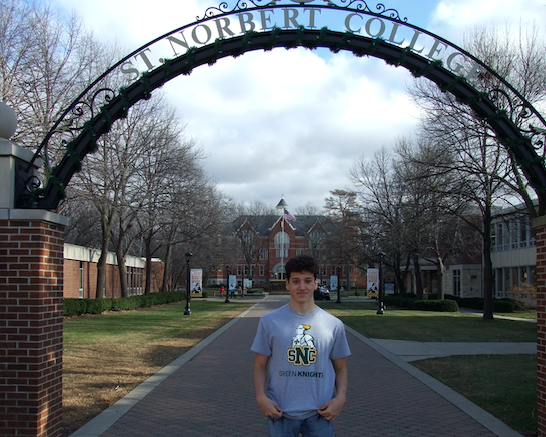 Kostov will enter his freshman year already under three of the school records and an immediate A-finalist in multiple events for the Green Knights. Current photo via Victor Kostov

I am thrilled and beyond blessed to announce my verbal commitment to St. Norbert College to further my academic and athletic opportunities. I am truly thankful for the supportive group of coaches, trainers, and family members who helped me get to this point in my swimming career. I can’t wait to be a part of the team. Go Green Knights!!

Kostov most recently competed at the 18&U Winter Championships in Pleasant Prairie, WI, where he swam both backstroke, fly, and breaststroke events, as well as the 200 IM. This meet was run as short course prelims/long course finals, so Kostov got a chance to swim both distances for almost every event he competed in. In prelims, he went lifetime bests in the 100 back and the 200 fly by a few hundredths and two seconds, respectively. He has been particularly successful in the 100 back this season, dropping from a 53.2 in March to a 51.6 in November, and then again at this December meet. During finals, Kostov swam more personal bests in the long course 100 back, 100 breast, 100 fly, and 200 IM. He had another huge drop in the 100 back, where he sliced two seconds off his former best of 1:03.3 to clock a 1:01.7. In the 100 fly, he went sub-minute for the first time, finishing at a 59.53. He also dropped two seconds in the 200 IM, swimming a 2:17.

During the 2020 high school season, Kostov qualified for the state meet in the 100 back and 200 IM. In those races, he finished just off his bests and placed 19th and 15th in the timed finals. He also helped Bay Port to an 11th place finish in the 200 medley relay, where he led off in a 25.16.

St. Norbert College is a Division 3 program competing in the Midwest Conference. Although they’re a brand new program, with their first full season being the 2018-2019 academic year, the men’s team finished 4th out of 9 teams.

Kostov is a huge get for the Green Knights, with seven projected A-final appearances, including second-place finishes in the 100 fly, 100 back, 200 back, and 200 IM, and a third-place finish in the 200 fly, based on the 2020 results. He would also be among the top swimmers on St. Norbert’s 19-20 roster for those events.

Kostov already surpasses the school records for the 100 back, 200 IM, and 400 IM. His 400 IM in particular crushes the previous record by nine seconds, while his 200 snags the record by two seconds.