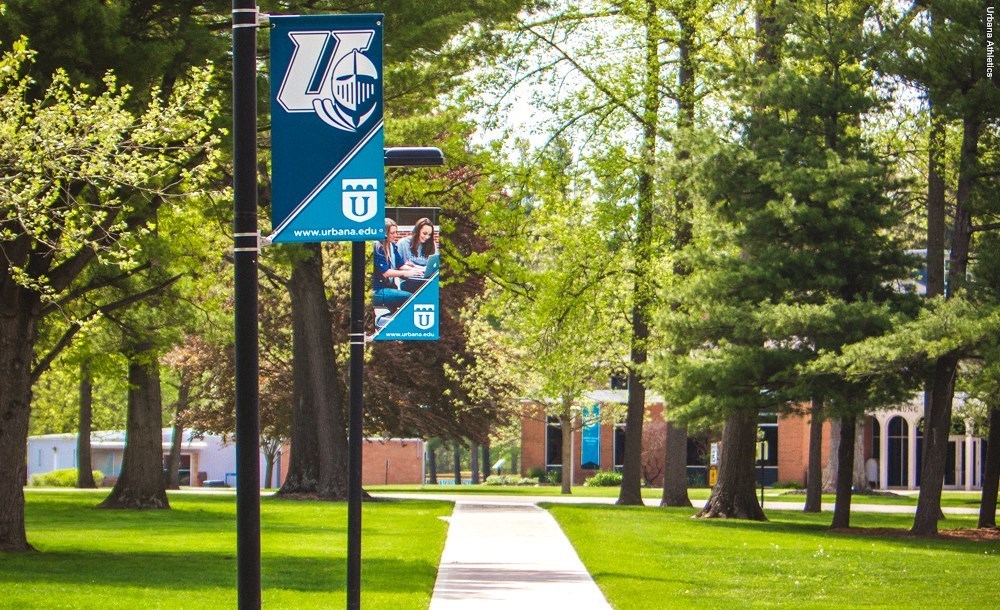 Urbana, a branch of primarily-online Franklin University, will cease all on-site programs as a result of the COVID-19 pandemic. Stock photo via Urbana Athletics

Ohio’s Urbana University will not re-open campus after the COVID-19 pandemic resolves, the school announced Tuesday. The private university closed all residence halls, moved to online learning, and canceled all remaining athletic events for the semester on March 12.

Urbana is a branch campus of Franklin University, which primarily serves an online student population and is headquartered in Columbus. The school, which has an enrollment of 1,254 for the 2019-20 school year, was founded in 1850 and acquired by Franklin in 2014.

“As a result of this decision, academic programming will be moved to Franklin University, while athletic offerings and on-site administrative roles will cease at the Urbana branch campus,” the school said in a news release.

The news came shortly before the College Swimming Coaches Association of America tweeted that “COVID-19 has claimed its first two swim teams.” It’s not clear at this point which teams the tweet was referencing – but presumably, Urbana is one of them.

Sad that so many as so sad

This site may have to change its name to Swam Swam

I’ve thought of the long-term future of this site a few times, and come to the conclusion that it will go one of two ways:

Remember when collegeswimming.com had a message board and that was our outlet for communications

Buckle up, sadly just the beginning.

Not a huge loss to the swim community tbh

That is ignorant. If you swim and love swimming, you support the sport no matter what. I hate the mindset that only if we lose the faster programs is it a loss. There were swimmers here who loved to swim and chose the school for a reason and that opportunity is gone. While it may not seem it to some , there are all different levels of swimmers that love swimming.

what you’ve just said is one of the most insanely idiotic things I have ever heard. At no point in your rambling, incoherent response were you even close to anything that could be considered a rational thought. Everyone in this room is now dumber for having listened to it. I award you no points, and may God have mercy on your soul.

This is pretty insensitive. Even though they were not the fastest program in the country or even in the state, it gave kids who were not the fastest on their team a way to continue swimming in college. Many colleges and universities value the experience over any results because retention of students (matriculation) and their value as alumni does more than many know in maintaining the health and well-being of the institution. So now a kid who is not the fastest on their team with no hopes of making a JO cut has one less option for continuing to swim after high school.

Is this a joke? To swim in college is to see good results. I am sorry for this program being cut but if it was really a “just for the experience” team, which I doubt it was, then it should be cut because that is a waist of money.
The truth is, there are plenty of college teams that are only for the experience, they should be shut down, if you are only wanting to swim, swim inter murals/ club! Otherwise it’s a waste of tax money!

I’m sorry to hear about your waist. Maybe more intramural activity will help?

This article is not about the program being cut due to performance related issues. The entire school closed. I disagree with your stance also. Smaller colleges tend to use their athletic department as an extension of admissions. These schools look to drive enrollment through squad sizes and marketing opportunities. The metric used to measure success for a lot of small college coaches is your recruiting number, not necessarily results and your budgets are funded through tuition revenue.

Swimming in college is more about being part of a community where you continue to grow and develop as a young adult, it is school of course. To perform professionally, is driven by results

I have so many questions about your post. What are “good results” exactly? How does a swimming program, at a private university, waste tax money? What is “inter murals” swimming? If you doubt that it was a “just for the experience team,” then why would you want to cut it? Most importantly, what is a “waist of money?”

This might not seem like a “huge loss” to you, but to the coaches and swimmers in this program, it’s a huge loss. You have no idea what the students and athletes are going through at Urbana. We were not the biggest program, but we worked hard day in and day out in the pool, weight room, and the classroom. I would appreciate some respect because today, our swimmers and coaches need to find new homes.

@swimfan
Your comment was unnecessary in this time of need. This program was growing bigger every year and faster. Rome was not built in a day and neither are athletic programs. Your comment now targets not just the athletes at this school but also the coaching staff that worked day and night to rebuild a stronger program. How about the next time you feel the need to make a comment you think about everyone involved in your comment and not just yourself.

Coach Cassandra Wendall was in her second year with the team. As a graduating member of this program, my heart aches. The changes and improvements this school and athletic programs were making gave us so much hope. My heart breaks for my fellow Blue Knights 💙💙

I’m very sorry that you’re losing your team. All the best to you and your fellow Blue Knights!

Unfortunately a preview of coming attractions. Not just for swimming, but for some of these small private schools who were on the verge of “hitting the wall” due to the declining college age population prior to the pandemic

Unfortunately adding 6-7 million unemployed each week while we wait out this virus will have a trickle down effect for all of us.

It will be interesting to see the affects of this as they pertain to “for profit” schools vs. “non-profit” schools. I know those terms are loose at best but there are enough distinctions that one may come out of this on very different ground than another.

Maybe instead of a college like Harvard, who has a 40 billion dollar endowment, siphoning off 8.7 million in Federal aid smaller schools like this should get the money.

Harvard is giving it back.

As I understand, Harvard never actually asked for or accepted the money. The politicians gave it to them, and then criticized them for it. So Harvard isn’t “giving it back,” they’re “rejecting it.”

Stanford and Princeton have done the same.

Cornell says it will take the money, as does Notre Dame (giving it all to students).

It’s no surprise that the politicians made a mistake given they often don’t read through these bills prior to passage. Good for Harvard and others rejecting it.

A large part of the money for colleges and universities was earmarked for students and their expenses. Harvard and other high level schools have scores of impoverished, and frequently, first generation students on full stipends. Many of those students had no money to get home, pay for food without university food services, store their belongings, etc. If you look at the list of funding for colleges and universities in the bill, you can see the amount for students/university.

What are the two teams that are gone now?