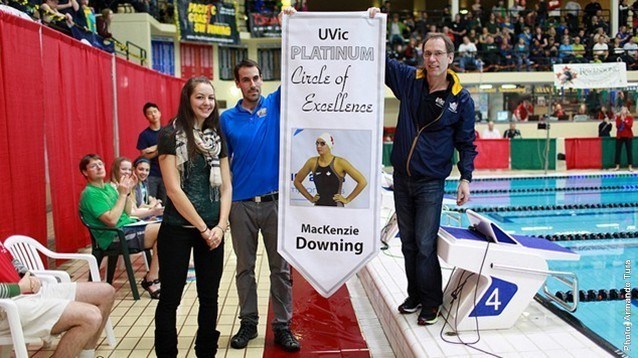 VICTORIA – University of Victoria Vikes alumna Mackenzie Downing was honoured Saturday, Dec. 7 as she was inducted into the University of Victoria’s swimming Platinum Circle of Excellence during the eleventh annual Christmas Cracker swim meet at Saanich Commonwealth Place. Downing is among the all time Vike leaders with seventeen CIS medals in her UVic career.

Originally from Whitehorse, Yuk., Downing moved south to UVic in September 2004 to pursue her swimming career and begin her studies in Classics and Archaeology.

She was named the University of Victoria Female Athlete of the Year in both 2007 and 2008.  Her accomplishments in the pool translated to her life as a student, where she achieved a 9.0 G.P.A. in 2008. As a result, Downing was honoured with the prestigious UVIC President’s Cup in 2008 for combined athletic and scholastic success.

Editor’s note: the UVic 9.0 GPA scale basically gives a different grade point to an A+, an A, and an A-. A 9.0 is the highest award given on the scale.

“I had just been injured and so I was a bit of a wreck,” Downing noted in an interview about her arrival at the university. “UVic brought me back into a positive frame of mind and really brought me up to the international level.”

At the 2007 FISU World Student Games, She earned a Gold in the 100 Butterfly in Canadian Record time, Silver in the 200 Butterfly, and Bronze Medal in the 4×100 Medley Relay at the. As a result of these performances she was named the flag bearer for team Canada at the 2011 FISU Games.

Currently the Communications Coordinator for Citius Performance Corp., Downing will pursue a Masters of Science in Osteoarcheology from the University of Edinburg starting next fall. As a retired member of a Canadian world championship team, Downing becomes the newest member of the University of Victoria swimming Platinum Circle of Excellence.