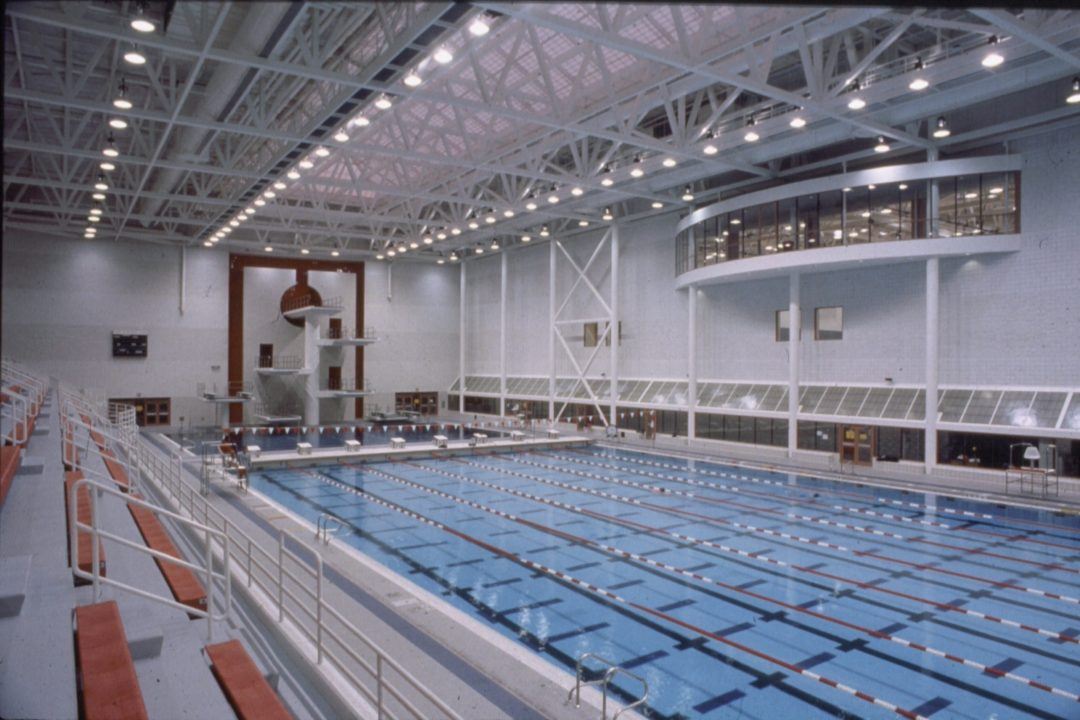 The University of Georgia will host the 2019 SEC Swimming & Diving Championships.

The dates and location for the 2019 SEC Swimming & Diving Championships have been set.

The University of Georgia will play host to the combined women’s and men’s meet at the Gabrielsen Natatorium in Athens, GA. The championships will run from Tuesday, February 19 to Saturday, February 23, 2019.

Georgia last hosted the conference championship in 2014. Opened in 1996, UGA’s Gabrielsen Natatorium has a seating capacity of approximately 2,000.

Gabrielsen Natatorium has always provided a strong home pool advantage (and then some) for the Georgia women. When SEC’s was in last in Athens in 2014, the UGA ladies took home the team title by over 350 points. Up until last year, the Bulldog women held a 22-year home dual meet winning streak. That streak was snapped in January 2017 by the Texas Longhorns.

Florida’s natatorium at the O’Connell Center was state-of-the-art when it opened, but is badly in need of an update. Unfortunately the recent renovations to the adjacent basketball arena didn’t include any work on the pool.

You would think with all the success they have had they would build/remodel the facility. A ten lane pool with separate diving well would put them in a category unto themselves in Fla. Those bleacher stairs are pretty steep but I don’t know if anyother facility can get as loud as it does in there. Go Gators!!

I think this SEC Championship meet officially moved back to a Tuesday – Saturday format, the way it was before last year.

That is correct. The article has been updated to reflect.

4
0
Reply
Show Me The Money

This needs to have an updated picture of the natatorium; UGA has put in much needed new scoreboards that now make it the best championship-hosting pool in the SEC.

The SEC has its act together as regards swimming. It is by far the best swimming conference, and when that is considered alongside the success of football and basketball, it says lots about the Conference priorities. Let the football teams make nearly $billions from successful football programs, and support the “minor” sports.

Along with this incredible depth in swimming, the SEC colleges have also stepped up in terms of facilities. Top-to-bottom, SEC has the best on-campus swim facilities, and its great that a rotation among the premier facilities to host SEC’s allows for great championships (including 10m platform diving). National-level facilities are almost universal in the league: UGA, Auburn, Tennessee, A&M, Mizzou, Florida, and Kentucky have all hosted SEC.… Read more »

The SEC, well when I swam, rotated the conference meet. So you had USC host SEC as well as UGA. I think that if a university built a new pool, then would skip to the front in terms of hosting.

Aside from Ole Miss or Mississippi State sponsoring swimming and building a facility, I don’t see any other SEC school building a new pool. Basically, what I mean is, USC and Vandy aren’t going to build new pools. USC has a good-enough pool, though the lanes are narrow. Vandy is the smallest school by far, and they get by with using the Tracy Caulkins pool in Nashville. UK, Bama, and Florida both have good pools, even though the diving apparatus are at one end of each of those. No reason for them to build a new pool.

0
0
Reply
KNOW IT ALL
Reply to  BaldingEagle

0
-1
Reply
BaldingEagle
Reply to  KNOW IT ALL

You’re right. Not to speak ill of the rest of the conference, but the talent-level drops off dramatically after Texas. Just the facts.

I agree. The spectator seating capacity there is limited.

Maybe to put it another way: NCAA Championships require a pool with a separate diving well with 10m towers. Using that criteria, SEC has more facilities than any other conference to host that level of a meet. Only a very small handful of pools outside the SEC can host NCAAs: Iowa, Georgia Tech, Texas, GAC, Federal Way, Minnesota, Ohio State, Purdue… Houston? Long Island?

You missed the most obvious one: IUPUI 😉

But yes, on totality, the SEC has the best aquatics facilities of any conference in the country, especially once A&M and Missouri joined (though, speaking technically, those were both built as Big 12 facilities, so one could make a semantics argument about whether SEC gets the credit for ‘investing’ in those facilities. Either way, they’re in the SEC now!)

Yea, wow. I include Federal Way, GAC, and Long Island, but I miss IU Nat in the roster of off-campus, national-level pools.

It hasn’t hosted a national level meet in quite some time other than NSCA Juniors, but the Orlando YMCA has 50 meters with a separate pool for diving. Spring Nationals were held there in 2004, but I don’t think any NCAA meets have been held there. Indiana and Michigan technically fit the bill, but they don’t have a ton of spectator or athlete seating.

Another obscure one–Palo Alto College Aquatics Center in San Antonio. It hosted the US Open in 2002ish. They have a 75 meter pool with towers. Oklahoma City Community College fit the bill until they tore down their pool a few years ago.
Liberty University just built a facility that meets those standards as well.