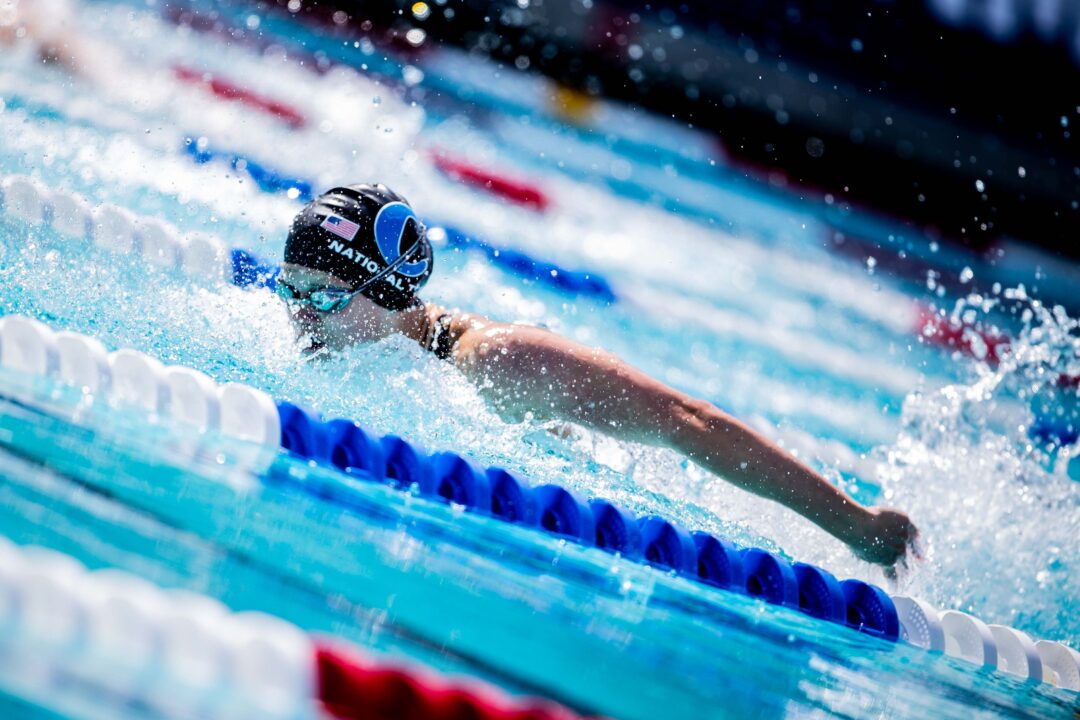 The American squad of Daniel Diehl, Zhier Fan, Alex Shackell, and Anna Moesch teamed up for a 3:46.83, finishing as the only team in the field under 3:50. Stock photo via Jack Spitser/Spitser Photography

The U.S. put up strong splits across the board, starting with Diehl, who got them out to a blistering start with a 53.42. That performance came after Diehl won the boys 100 back earlier in the session in a new personal best and U.S. 15-16 NAG of 53.27. Zhier Fan was next in for the Americans, splitting a 1:00.76, followed by 15-year-old Alex Shackell with a 58.55 fly split. American anchor Anna Moesch had a notable performance as well, bringing the team home in 54.10.

The team also clipped the Junior Pan Pacs Record in the event, which stood at 3:47.01 from the 2018 Championships, and was also held by the U.S.

Here is a split comparison between the American relay tonight and the previous record-holding relay, which featured Phoebe Bacon, Daniel Roy, Luca Urlando, and Gretchen Walsh.

Since the male and female swimmers are split out differently between the 2 relays, it’s hard to compare the swims split-for-split. Even so, it’s fairly clear that Diehl’s backstroke split was a massive piece of the U.S. breaking the record tonight. Zhier Fan was a tick slower than Daniel Roy was on the breaststroke leg, while Anna Moesch was 0.32 seconds sl0wer on freestyle than Gretchen Walsh was.

Another notable split in the field tonight came from Japanese breaststroker Yamato Okadome, who split 59.99 tonight to lead all breaststrokers.

How do they compare to the splits from the Grant-Matheny-Huske-Walsh relay in 2019?

I think it’s not accurate because her front and back half splits are just too strange and the splits for the first two legs are wonky as well.