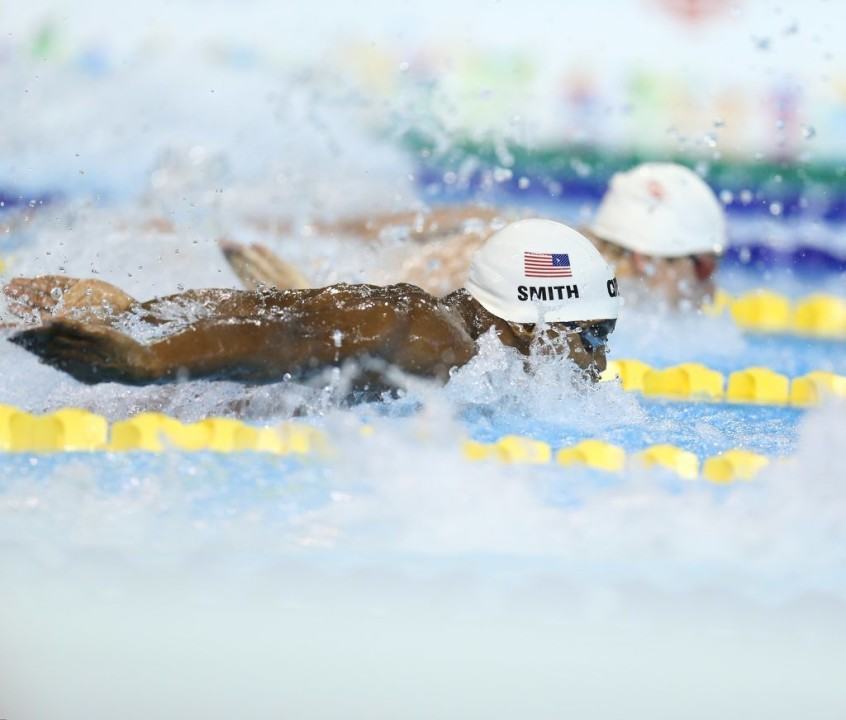 As things have been heating up all week here at the Toronto 2015 Pan American Games, the tensions are high was we head into day three finals. Current photo via Chris Tanouye/www.christanouye.com

To see all scratches for day three finals click here.

As things have been heating up all week here at the Toronto 2015 Pan American Games, the tensions are high was we head into day three finals.

The night will start with the women’s 400m IM where American Caitlin Leverenz will be looking to break the Pan American Games record for the second time today. This morning she was a 4:37.74, erasing Joanne Malar’s 16-year-old mark that she set all the way back in 1999.

Leverenz won’t be alone as she’ll have two young Canadians to contend with. Both Emily Overholt and Syndey Pickrem were very close to Leverenz this morning. Overholt, who took home silver in the 200m freestyle on night two, swam a very strong back-half and a similar race strategy to Leverenz. The breaststroke leg is looking like it could be the most important tonight.

If all goes well for the Americans they could be seeing a 1-2 finish in the men’s 400m IM tonight. Max Williamson and Michael Weiss are the leaders heading into finals, and don’t seem to keen on relinquishing their position. Canadian Luke Reilly will be looking to get into the mix tonight and win another medal for Canada. Famed IMer Thiago Periera will be swimming out of lane six after taking the fourth seed in prelims.

The women’s 100m fly is set up to be the race of the night right now. Kelsi Worrell broke the Pan American Games record in prelims with a personal best time of 57.23. That time ranks her third in the world at the moment and puts her in a great position to win tonight.

Prior to her swim, it looked as though Canadian Katerine Savard was going to dominate the women’s 100m fly. Assuming Worrell equals or betters her time from prelims, Savard will need to break her own Canadian record in order to come fist. Canadian Noemie Thomas is in a great spot to earn the bronze medal.

Giles Smith looked really strong in the men’s 100m fly this morning to grab the top spot heading into finals. He wasn’t all alone though, and will have to fight of Mauricio Fiol, Santo Condorelli, Santiago Grassi, Long Gutierrez, Eugene Godsoe, Albert Subirats, and Arthuer Mendes if he wants to win.

Emily Overholt of Canada and Caitlin Leverenz attacked the race right from the get go, separating themselves from the pack and locking together in a battle for gold.

At the touch it was Overholt, however it was later revealed after the race that she was disqualified and Leverenz was awarded the gold medal.

Leverenz made a big push on the breaststroke and was well ahead of everyone besides Overholt the majority of the race.

Sydney Pickrem, who originally was to take bronze, grabbed the silver due to Overholt’s disqualification. She was a 4:38.03, making up a lot of time on the last 100-meters of freestyle. Pickrem was almost passed by Joanna Maranhao of Brazil who split an amazing first 50 of freestyle in 31.86, however she managed to hold off her advances.

Maranhao finished just behind Pickrem by four one-hundredths of a second in 4:38.07.

With Leverenz’s winning time, she broke the Pan American Games record for the second time today. The time also ranks her fourth in the world this season and ahead of all other American swimmer.

In what can only be described as the second shocking upset of the night, Brazilian IMer Thiago Pereira was disqualified after touching first in the 400m IM.

Pereira held a sizable lead for the majority of the race, and the reasoning for the disqualification has not yet been verified. With the DQ, fellow Brazilian Brandonn Almeida took home the gold with a time of 4:14.47. Almeida’s time broke the previous World Junior record in the event making him the fastest junior swimmer to ever swim a 400 IM.

Luke Reilly for Canada put on a huge charge on the last 50 to pass both Max Williamson of the United States and American Michael Weiss. Reilly was a 57.66 on the last 100-meters of freestyle, splitting a 27.74 on the last 50.

Worrell took it out slower than some of the others, focusing on a strong back-half to win the race. At the 50 she was just in third place behind leader Katerine Savard and Brazil’s Daynara De Paula.

At the turn Canadian Noemie Thomas was in third behind Worrell, and both of them turned on the jets coming home to try and earn gold. Despite Savard’s efforts to hold on, she was passed by both Worrell and Thomas.

Giles Smith of the United States really worked his last 50 in order to break the Pan American Games record in the 100m fly by just one one-hundredth of a second. Turning in seventh, Smith came home in 27.55 to grab the gold.

It was an extremely tight race at the end, and Smith barely got his hands on the wall first. Santiago Grassi of Argentina was just out-touched by five one-hundredths of a second, clocking in a 52.09.

Santo Condorelli of Canada was leading at the 50 wall and managed to hold onto somewhat of his lead to retain a spot on the podium. With a 52.42, Condorelli was ahead of Albert Subirats by one-tenth of  a second.

The Americans ended their golden night with another huge win over both Brazil and Canada in the 4x200m freestyle relay. All three teams were under the previous Pan American Games record of 8:01.18 from the 2011 games, but ultimately it was the Americans who grabbed the top spot.

Emily Overholt led off for the Canadians, putting them in first place, but after that it was all about the US of A. Allison Schmitt dropped a wicked 1:56.08 split that put the Americans in first and they never looked back.

Although the Brazilians looked like they were back in the race, Gillian Ryan closed extremely well to make sure that the USA topped the podium once more.

Brazil was second with Canada taking home the bronze.

For those interested, the best replay of Thiago Pereira I could find is here https://www.youtube.com/watch?v=RyjDZg8WWBU. It looks like he touched with both hands. Also, is there a rule that your hands need to be parallel with one another? Because his right hand was lower than his left hand when he touched.

As expected a much better day for the US squad. 4 golds.

Nice performance from Leverenz. Looks good for her 200 IM.

I hate when swimmers give everything in prelims and swim much slower in final. If Savard had been at her level….
However, very nice day for Kelsi Worrell. Perhaps she wanted a perf in prelims and was only focused on the win in final. But be careful next time. Wins are more important than times. And keep your energy for the finals!

Giles Smith was the favorite on the men’s side with Fiol out and he responded well. Can be a top 5 next year at olympic trials. Top 2 no.

Bobo… Kelsi’s issue at night wasn’t a lack of energy. It was 2 errors. She rainbowed her start, and misjudged her finish badly.

Both are mental things and nerves… nothing to do with energy.

I love kelsi worrell. She is the best. So pretty.

What was Pereira’s time before the DQ?

Both protests from Canada and Brazil have been denied

And if you DQ the gold medal winner, it better be a clear violation.

Just saw the DQs on video at super slow motion. Pereira seems to do a one hand touch with his left. I don’t see a clear DQ for Overholt at the same 250 turn.