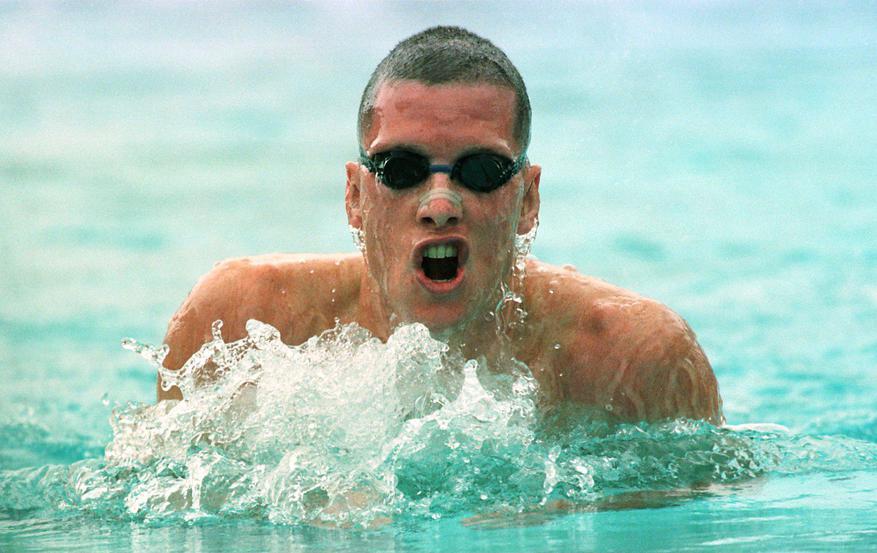 Tom Dolan battled through exercise-induced asthma and a narrow windpipe to become one of the greatest IM specialists in history. Current photo via Chris Cole PA Photos | Alamy

Tom Dolan is two years ahead of schedule.

The lanky 18-year old has been showing signs of greatness, and his coaches, including Jon Urbanchek at Michigan, expect big things for the IM and freestyle specialist in two years at the Atlanta Olympics.

The year is 1994, the pool is the Foro Italico in Rome, and the meet is the FINA World Championships.

Dolan is laying waste to the world’s best swimmers in the 400m individual medley. After a prelims swim that didn’t feel too great, Dolan is charging for the finish. When he hits the touch pad it is a new world record, formerly belonging to one of the greatest swimmers of all time, Hungary’s Tamás Darnyi.

“My aim with Tom was to get him ready for 1996,” says coach Urbanchek. “The Atlanta Olympics were my goal, and I thought he could be the number one IMer by then. He beat me by almost two years. I thought the road would be longer, but it took a lot less time.”

By the time they get to the Atlanta Olympics, Dolan is one of the top swimmers on the planet, having scorched the NCAA record books. In Atlanta, the “string bean”—he is six foot six and weighs 180 pounds with just 3% body fat—delivers a gold medal in the 400m individual medley.

Four years later, at the Sydney Olympics, Dolan delivers a 400IM that flirts with perfection. He surges out to a no-one-else-is-in-the-picture lead during the backstroke and never looks back, repeating as Olympic champion and smashing his own world record.

He is asked if he’d finally achieved his goal of the “perfect race.”

Dolan’s career on the world stage was legendary. Clutch swims and big celebrations.

What made it all the more remarkable was that behind the goatee, earrings and Olympic titles was someone who simply struggled to breathe most days at the pool.

Disadvantages are confidence in disguise

Tom Dolan had a lot of natural talent. He benefited from the low-drag profile of his body, which was built like an eel. He had the long wingspan, big hands, and size fourteen feet that sailed him efficiently through the water.

He had the relentless work ethic and a competitive fire forged from countless yards and meters.

But Dolan also had something else.

A partially blocked trachea—windpipe—giving him access to only about 20 percent of the air an average person can gulp down. Like breathing through a straw.

Making matters worse, Dolan also suffers from exercise-induced asthma. Limited by the type of medications because most of them are on the banned substances list, he carries around an inhaler and uses Breathe-right nasal strips to keep air flowing.

Oh, and he also trains and competes in chlorinated pools, and well, we all know how the air can be in there from time to time.

Combined, it made the simple act of breathing a very real concern when Dolan was at swim practice.

“It can really get bad in our workouts,” said Dolan. “There will be a real tightness in my chest, and I won’t be able to get a lot of air.”

Over the span of six months he is sent to the hospital twice after hyperventilating and collapsing at the pool.

(Doctors cleared him to swim after a full round of tests. Also, his father and coach were often reminding Dolan to watch out for certain signs and sensations to protect himself in the water. “Hey, it’s great to have the fire and desire, but I also want him to have a little common sense,” said his father, Bill [1].)

But despite the perceived limitations, Dolan views the asthma, the smaller windpipe, the suffering and the agony as tools sharpening him into a better and more prepared swimmer.

By the time Dolan gets behind the blocks he knows the competition can’t possibly make him hurt any more than training and trying to breathe has.

“I know I’ve gone through more than anyone else in the world has to get there. I’d rather not have asthma, but it has made me tougher, made me stronger,” said Dolan [2]. “My coach says it actually helps me in meets because it increases my ability to withstand stress.”

“He has an incredible tolerance for pain,” says Urbanchek. “So he does suffer, but there is a good side.”

The Takeaway for Swimmers

We tend to look at disadvantages or adversity as weaknesses. Because we don’t have the best facilities, the best coaches, or the most talent we settle for giving less than our best. We never go all in on our goals because we feel like we are starting from a position of inferiority/disadvantage.

We aren’t tall enough. Started too late in the sport. Not talented enough. The coach doesn’t give me enough attention. I’m the slowest swimmer in the group. It’s not fair.

It’s not hard for each of us to find a reason to not be successful. We all have one. Some, like Dolan, have a couple. When we start searching for reasons we can’t be successful we drain attention and resources on maximizing the things we do have.

Dolan took his “weaknesses” and flipped them on their head. By virtue of his perspective they turned into things that would boost his confidence and sense of preparation.

He also refused to waste energy and effort on trying to change things that can’t be changed. “Stressing over [the asthma] won’t make it better. So I just have to deal with it,” said Dolan [3].

Adversity is a weapon. It can fuel you. Motivate you. Be the chip on your shoulder every day in practice when you are putting in the laps.

A harder path gives you the confidence to know that whatever is thrown at you, you can handle it. A more difficult journey steels you for high-pressure moments.

Don’t fear adversity. It can be just the thing that gives you the confidence to take on the world.

Lots of elite swimmers (and other athletes) have some level of asthma, even more than in the general population (and I have a very mild case myself). I’ve always rejected the view that it hurts performance, simply because if it did, fewer asthmatics would be world class! So I’ve always felt that one of the following three things is true:

1) Swimming causes asthma in that the chlorinated water or the physical exertion causes the condition. So it’s a natural (and harmless) adaptation.
2) There aren’t disproportionately many swimmers with asthma; you’re just more likely to find out if you’re pushing your body to the limit (or, cynically, trying to get an edge with the medication).
3) Asthma… Read more »

TUEs that other athletes wouldn’t be allowed to have

Athletes and coaches are addicted to the word adversity

Thanks for posting this – it’s a great article for swimmers to read. But also, as a former swimmer this was a good read as it is pretty applicable to life in general. Sometimes struggling and encountering setbacks seems like failure, but is often hard to recognize in yourself the drive and confidence it takes to accept that and continue.

Sorry for getting *deep* but it’s a good article at a good time whether your training has been halted, you’ve just graduated college and can’t get a job, or whatever else you might be struggling with.

So he was among the 25% of athletes in Sydney that were asthmatic . Ok .

Dolan was a great swimmer, but he was also ridiculously cocky. I was rooting for Namesnik to beat him in Atlanta soooo bad. I think most people were.

This story is very overblown. He’s no more cocky than any other successful athlete. I swam against Dolan growing up – great guy, fierce competitor. But, he loved to joke around as much as anyone outside the pool.

Dolan was monster back in the day. His 4:08 500 freestyle national record, set in 1994, stood for 11 years. I think the previous record had been 4:11, set the same day by Chad Carvin. So Dolan lowered the record by nearly 3 seconds. At the time, 4:08 seemed completely inhuman.

Don’t forget that he did all of this in a paper suit and not a jammer. Total beast.

He was clearly a workhorse, because his technique, especially on backstroke, left something to be desired. Impressive he was that fast with those strokes.

Love Tom Dolan and what he did. And yes, he had pumonary issues. But he did not take in only 20% of the air he should have been. A guy his size at maximum would have been over 200 Liters of air movement per minute. He wasn’t only taking in 40 Liters per minute. His oxygen extaction at that level and the paces he was achieving would have meant 100% oxygen extraction (and that wouldn’t even be enough). He has/had reacitive airway disease and thus sometimes he was fine and a world record holder and sometimes he had great difficulties. But he didn’t have a permanent 20% capacity.

The reactive airways disease was probably much less problematic than the tracheal narrowing. Lots of greats have had it (Rick Demont, most famously, but also Andy Coan and a host of others going forward). That tracheal narrowing definitely increased work of breathing, and though he compensated for that by unreal inspiratory muscle strength/conditioning, it shouldn’t be diminished as a handicap. Try doing a 400 IM breathing through a straw. His trachea wasn’t quite a straw, but you get my point.