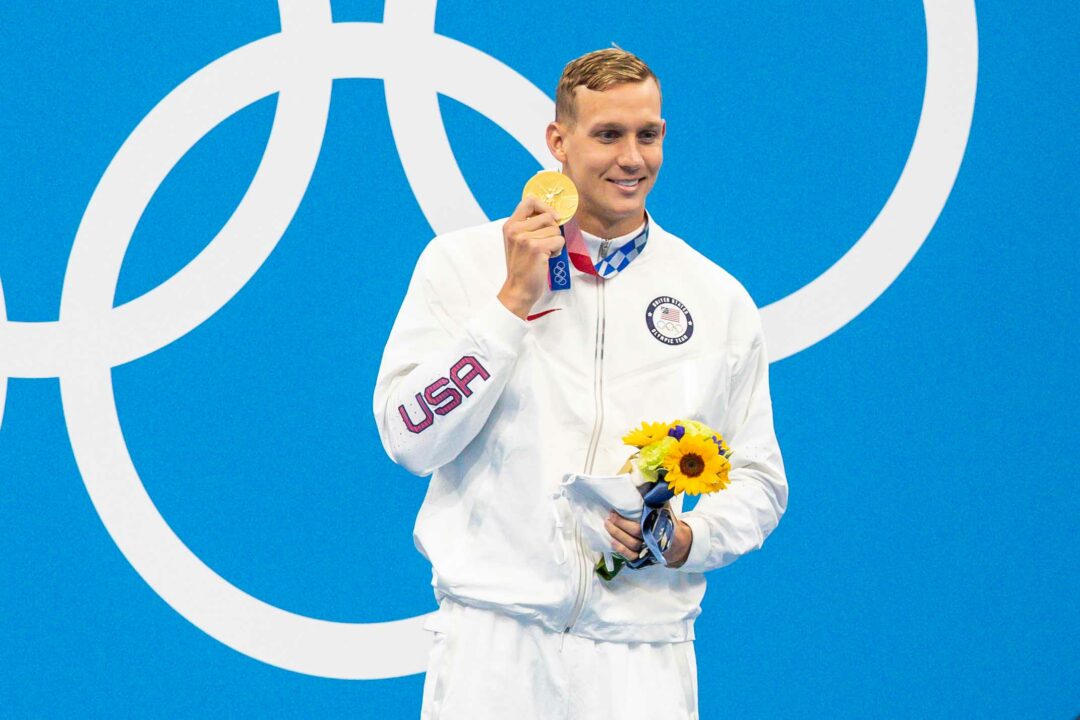 The American has been swimming’s undisputed superstar on the men’s side since the retirement of Michael Phelps in 2016, having dominated the last two World Championships with a combined 13 gold and 15 total medals.

But, from the perspective of many, he had to get it done on the biggest stage in order to truly cement himself as one of the world’s best. And he did just that.

Although Dressel’s final medal tally of five fell well short of what some had forecasted for him, especially after his World Championship performances, he swam flawlessly.

The 24-year-old Florida native won all three of his individual events, becoming the first male swimmer to earn a trio of gold medals on his own since Phelps did so five times in 2008.

Dressel saved his best for last, too, winning the men’s 50 freestyle in an Olympic Record time of 21.07 to open the last session before dropping a scorching 49.03 butterfly leg as the U.S. men broke the world record in the 400 medley relay.

The former Florida Gator joins an elite club with his five gold medals, becoming just the fourth male swimmer to win that many. He joins Phelps, Mark Spitz and Matt Biondi.

Dressel provided critical legs on the victorious men’s 400 freestyle relay and 400 medley relay, and his lone event that didn’t result in a gold medal, the fifth-place-finishing mixed 400 medley relay, had nothing to do with his performance, but was more a coaching staff blunder in terms of selecting the correct order.

So with all eyes on him and endless promotion from the mainstream media, plus having to sit on the sidelines and wait until the fourth day of competition before his first individual event (something he admitted wore on him at the Olympic Trials), Dressel fulfilled all expectations placed on him, and did so masterfully.

Dressel so overrated, couldn’t even split the 45.36 necessary to medal in the mixed medley relay (or 43.99 for the gold).

If the coaches had realized that they would be 7 seconds faster in the breast. and 4 seconds slower in the backstroke with gender swaps in those two legs! They would’ve easily won.

I HOPE SWIMSWAM will do an article cataloging and updating us on all the Olympians — at least those who made finals in swimming – and which of them “intend” to continue on toward Paris, and which of them will call it quits. Katie L. has said yes for Paris, right?

Also, I was curious to see if Dressel could nab enough gold medals to surpass Lochte on the all-time list and he managed to do so, with his total being 7 gold medals between Rio and Tokyo with Lochte being in possession of 6. Nothing personal against Lochte, who is one of my favorite swimmers, I just like seeing greatness surpass greatness, especially with the connections between Lochte and Dressel.

Dressel with 5 golds, 2 OR’s, and 2 WR’s- under all that pressure of being #1 in his events for the last 4 years. He swam like a champion, and like a team captain.

Dressel’s dominance in the free/fly sprints over the last 4 years is unreal. On top of that, he’s a great guy and seems to be a great teammate as well.

I feel like we see this a lot where someone dominates for a few years and pushes everyone else to even greater heights. I think at the next world championships it will be much harder for Dressel to triple gold in his individual events because of the younger guys who are just starting to come in to their own (Kolesnikov, Milak, Popovici, Hwang, etc.)

It gotta end somewhere. He did the triple twice at worlds then walked the talk at the games. He doesn’t have anything left to prove. Hope he tries some off events now tbh

Not enough love given to Bobby Finke and his 2 last 50 crushing golds. Yes, no Sun Yang in the final but not sure this time it would have mattered. Finke is a racer and did what he needed to do to win. With that much left in the tank, wonder how he would do taking it out more aggressively. He likely has a great 400m in him too.

Right? People slag on MA’s race strategy – which, is definitely very valid – but (smartly) I haven’t seen many, “why finke no go out faster and win by more 🤔???”

He swam those races perfectly for an Olympic final – sorta like a distance race in track, just position yourself to blow by the field in the last stretch – but it does make me think he could have obliterated Jaeger’s 1500 record if he didn’t come back in a …. wait I was at a wedding last night and just looked up the split now, 25.78!? Jesus christmas.

Just a reminder that America came a distant 5th in the mixed relay.
I’m still working that one out.
How can a team get it so incredibly wrong
Embarrassing

That has ZERO to do with Dressel, who split 46.9 on that relay after two other swims that night.

How many individual Gold Medals did Spitz, Biondi, Phelps, and Dressel get for their first Olympics?

I think the SwimSwam commentariat has been too harsh on a certain American swimmer. I don’t think you can place the same expectations on him with the Mount Rushmore of American swimming. If you had told me a year ago the results he had right now, I would say that it was a very successful Olympic Games.

Phelps had no medals in his first Olympics at 15.

yeah i know, i went by the medals they had when they were around MA’s age

Jeff, I specifically mentioned first Olympics. If you want to look at age, compare the times for Spitz and Biondi with MA at same age.

just seems a little unfair to compare two 18 year olds and a 15 year old to a 22 year old. Absolute times are not the concern here

The point that I’m making is that the absolute greats did not do well in their first Olympics. In terms of age, you should compare him to Caeleb Dressel instead of Olympians from over 35 years ago. Caeleb Dressel is 24 now and Michael Andrew will be 25 in Paris.

It is still too early to judge MA as he only started training for the 200IM for 1 year. Even then his training was interrupted by the Covid pandemic.

As a MA fan, my biggest fear will be that he will focus on the stroke 50s as that lends itself very well for USRPT and he won’t adjust his training to be the WR holder in the 200… Read more »