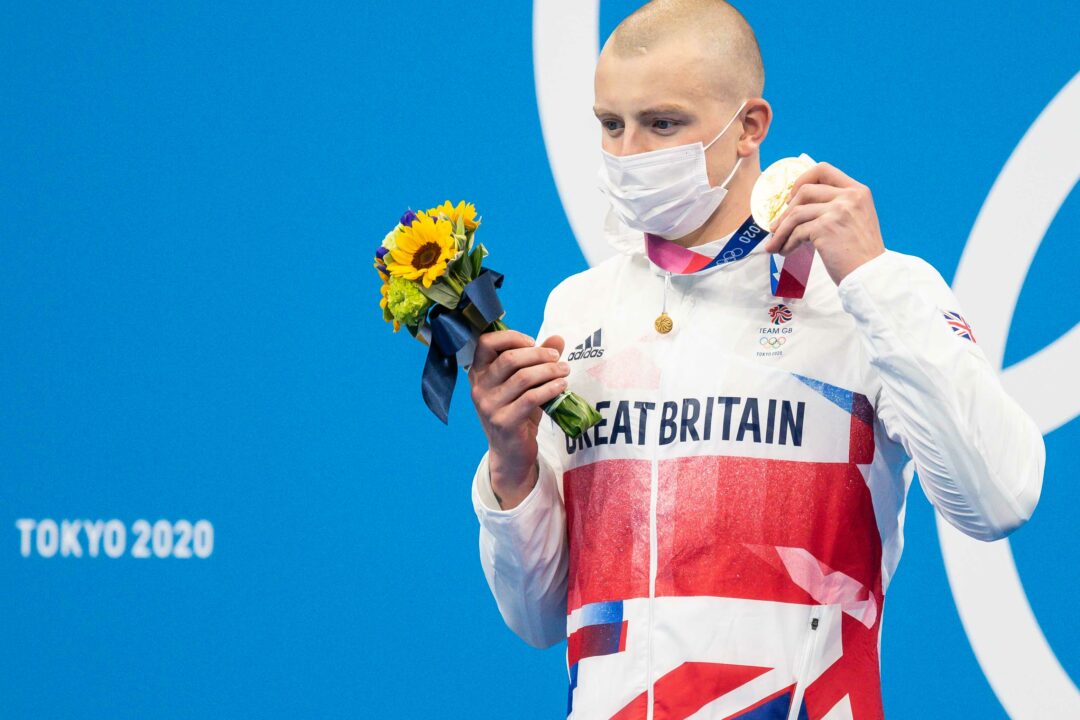 After finishing day 1 with no medals, Europe scored 4 medals on day 2. 3 of them were earned in the men's 100 breast where Peaty defended his Olympic title. Current photo via Jack Spitser/Spitser Photography

Europe scored four medals on day two of the Tokyo Olympics and three of them came in the men’s 100 breaststroke final.

Adam Peaty became the first British swimmer to ever defend an Olympic title by winning the men’s 100 breast with a time of 57.37.

In 2016, Peaty won the race with a significant lead of 1.56 seconds over 2nd place finisher Cameron Van Der Burgh of South Africa. Peaty posted a 57.17 in that race.

On day 2 of the Tokyo Olympics, he came within half a second of his World Record from 2019 but only had a .63 lead over the field.

The 100 breast was Peaty’s only individual Olympic medal in 2016, alongside a silver medal in the men’s 400 medley relay.

Europe’s 4th Olympic medal of the day came in the men’s 400 free relay where Italy took 2nd place with a National Record time of 3:10.11, crushing the previous record from prelims set by the three of the same men who swam it in prelims by .18.

Continental and National Records on Day 2

random factoid: as far as I can tell Arno Kamminga is only the 3rd Dutch man to ever win an individual Olympic medal. The only gold medalist being PVDH (ofc), and Wieger Mensonides having won a bronze in 1960 (in the 200 breast).

Wow. I would have thought a lot more judging by the success of Dutch female swimmers

I know! For some reason I thought there were more too. The Dutch women do tend to carry most of the medal tally in all sports for the Netherlands though 😉

Seems to be the same too with the women for Denmark and Sweden.

It’s a lot harder to repeat Olympic Gold than people think. You have to be the fastest in the world 4 years apart. In this case, 5 years apart. That’s a big age gap in terms of wear and tear on the body.

People think it’s common with the big names like Ledecky or Phelps doing it, but it’s so so hard and we take it for granted.

On the basis of his reaction, Peaty seemed to really value that win much more than in Rio. In interview dropped multiple F-bombs on BBC. Fabulous stuff.

Nice. Haven’t seen the interview but pleased for him and it sets him apart as the best British swimmer of all time.

And yes he is the best 100 Breastroke swimmer of all time. It seems like the days of guys doing 100/200 at the the highest level are over. The sprint Breastroke technique has changes so much but can’t last for 200m.

Over until it isn’t over

Greatest 100 breast swimmer of all time.

Whoever downvoted this, who is better than him? SMH

Anastasia Gorbenko set an Israeli record of 59.30 to qualify for the 100 back final, haven’t seen that mentioned in either Europe or Asia so thought I’d point it out.